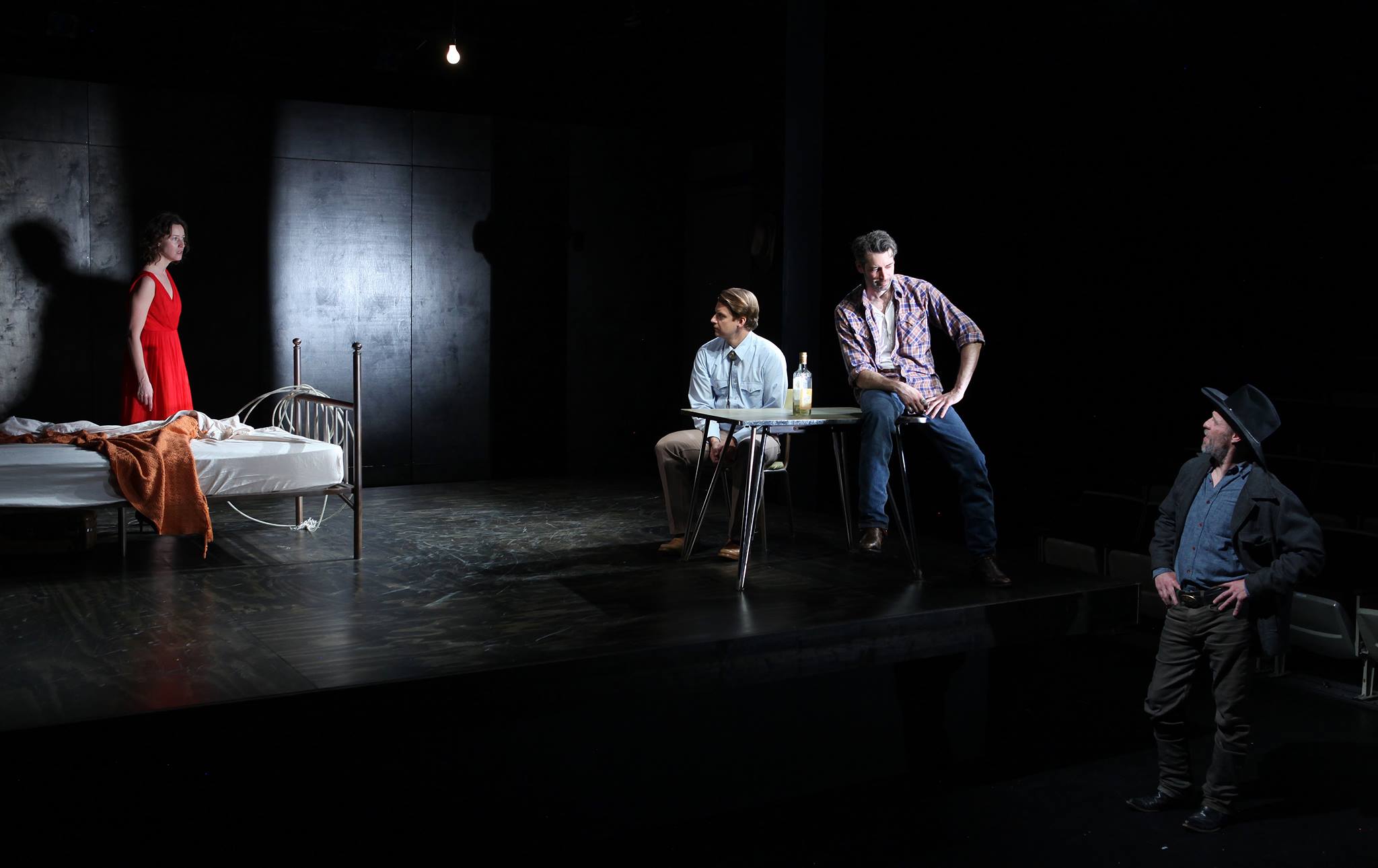 Many theaters stage revivals of plays that have been performed in their earlier repertoire and proven enormously popular, but it’s a rare opportunity to see a play return to the site of its world première. Sam Shepard’s “Fool for Love,” now at Magic Theatre, debuted here in 1983, and catapulted the careers of its lead actors, Ed Harris and Kathy Baker. The buzz surrounding the play, with its ties to the film The Right Stuff, makes the revival a must-see theatrical event. And so, I was intrigued to see what Director Loretta Greco would make of the revival.

For the original at the Magic, Shepard, directing his own play, set the scene in a  stark, seedy motel in the Mojave Desert. Greco, in turn, offers us an utterly threadbare stage: a rickety bed, Formica table, and a single chair, with no walls, riveting our eyes on the two erstwhile lovers. Eddie and May are grappling with an ineluctable sense of desolation that has driven them together and apart, time after time.

In recent years, the Magic has regained much of its early luster under the helm of Artistic Director Greco, whose deft restaging of “Fool for Love” casts new light on Shepard’s script. Greco strips the play to its essence, and gives new force to the role of May (the explosive Jessi Campbell).

In its original performance, Shepard highlighted the role of Eddie, casting the commanding Ed Harris. Greco gives us a more tortured Eddie (a sensitive Andrew Pastides) who rages from within. In Pastides’ hands, Eddie’s emotional volatility reveals his aimless lot in life. Yet as gripping as his plight may be, Eddie retreats before Campbell’s May. May’s burgeoning self-possession struggles to emerge, continually derailing her palpable vulnerability. Despite the trappings of this cycle, Campbell conveys a nuanced sensuality that elevates May beyond a mere aggrieved victim.

“Fool for Love” emphasizes the subliminal curse binding these familiar lovers. “You know we’re connected, May,” Eddie reminds her early on, not as a threat but rather an acknowledgment. “We’ll always be connected. That was decided a long time ago.”  The threat of the Countess, Eddie’s unseen former lover, who has violently stalked him over his 2,480 mile trek, cannot frighten the aggrieved May.  Nor does the looming arrival of May’s unprepossessing new “man” Martin (Patrick Russell) discourage Eddie.

Poor Martin! The innocent and feckless “boyfriend” arrives for his date with May, only to find himself caught up in May and Eddie’s stormy imbroglio. Rather than provide a foil to the couple, Martin falls victim to their struggle, hapless “collateral damage,” trampled by ill-fated lovers.

As in Greek tragedy, Shepard counters his actors with a “Chorus,” the specter of the grizzled Old Man (the laconic, omnipresent Rod Gnapp). Perched in his wooden rocker, he lingers below the stage,  weaving in and out of May’s and Eddie’s consciousness. He comments from another realm, an errant, misbehaving figure from the past. The Old Man comments on the action, still intrusive and transgressing.

Here, however, Shepard departs from his classical predecessors. The mysterious ties between May and Eddie fester as this drama unfolds. The Old Man’s shocking sexual revelations go beyond Greek tragedy into new worlds of depravity. He carries his grief into a new-fangled eternity.

Director Greco strips the play to its bare bones, revealing a taut one-act saga that pays homage to the roots of tragedy, casting new light on a mainstay of 20th century American drama. Focusing on the volatile rages of the woman, she refreshes and renews her timely revival of “Fool for Love.” Magic’s “Legacy Revival” proves well worth our attention and reflection on who we are, now, and how we got here.