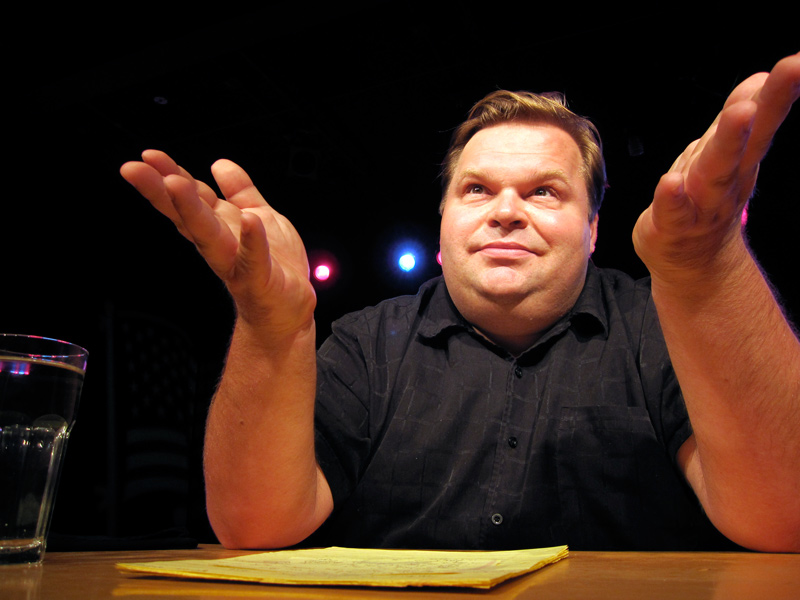 Mike Daisey is the U.S.’s most powerful story-teller. He comes out and sits at a table in the spotlight in the darkness at Ashby Stage, and begins to reel us in with a story about visiting a friend in the hospital. He tells us that we are all waiting in a hospital. Well or ill, we share a common condition. Although he seems to be dramatically warming up to talk about medicine or institutions or mortality, pretty soon he is in his friend’s hospital room and eyeing the left-over Salisbury steak and caramelized carrots. Then, he betrays our common hunger.

When he slyly looks at the TV playing Fox news, soundlessly, in the hospital room, his canvas opens wide to consider the body language, the techniques, and the magnificent lying. He uproariously realizes that Fox has “hacked” the whole damned concept of staging and diddling the news. His facial expressions of surprise and horror bring down the house.

After a wild tangent about health, he exposes all those doctors (and friends) who have told him he’s “fat”—making hay at the expense of the so-called medical “news.” Before you know it, we are off on a terrific journey that includes a Daisey-esque History of News, starting with Gutenberg and the first printed Bible. He tells us of the psychological effects of the printed page, how it opened the world to medieval peasants for the first time—taking them to places beyond their villages and towns. Finally, isolated and abused “peasants” could figure out that would be better to give up “this peasant business.” The audience in the former Church on Ashby Avenue is hooked, laughing out loud, joining in the fun. That’s how Daisey bring Light wherever he goes. It’s a blast, and an all new Daisey show-in-process at Shotgun Players BLAST New Theater Festival.

Daisey’s not the only new and experimental show on the menu for two weeks, so you better hightail it to Shotgunplayers.org to see the full pantheon of theater gods!

Daisey’s descriptions of how advertising took over the idea of news, back in the 19th Century, leading to hilarious distortions of reality—hmmm—sounds familiar. More spectacularly, he dramatizes the events, like the great actor he is. He recounts the machievallian rise of Roger Ailes, the former Head of Fox News, who started as a TV-advisor for Richard Nixon. Well, we know how that turned out for US. Ailes, recently exposed for sexual harassment by Megyn Kelley and other women reporters, always comes back like a zombie, with a new way to “hack” US.

In fact, Daisey explains in detail how Ailes figured out how to “hack” the consumers of news—that’s US, again. You have to follow his hilarious argument. He reminds me of an artwork from the sixties: a picture of a TV screen, on which these words are spelled out in fuzzy white letters:  “You are the product TV is selling.”  Ailes manages to use that concept to create a Fox Network that runs counter to the “mainstream” news on other networks.  In other words, like the Orange-Haired One, Fox debunks everything other news sources say, inventing the faux Fox News. And they fly under the cover that all news is equal—that all are supposedly “objective,” as the New York Times and CBS claim to be.  In other words, they lie and lie and lie and hide behind the myth of “objectivity,” an impossible claim from the start. “Fair and balanced” is precisely what any news cannot be.  But a Fox sure can hide in the hen house, under that false label.

Daisey regales us with the horrific rise of Roger Ailes, from Nixon dirty trickster to Fox caliphate. Ailes is destroying journalism as we once knew it—back in the days of Edward R. Murrow and Walter Cronkite. Those days look pretty good from the ruins wrought by Ailes, today. He delivered the news outlets to Murdoch and other potentates, who have consolidated and destroyed all in their sights.

Even after Ailes has been dethroned by sexual harassment scandals, he is no doubt ruling from afar—re-incarnated as the Breitbart jihadist, Bannon, and pulling the strings on the Trumpster.

Come and see the genius of Mike Daisey experimenting, this weekend, Feb. 17, 18, or 19 at Ashby Stage.

Be sure to catch Mike Daisey’s Part Two: “This Is Not Normal,” running from Weds., Feb. 22 to Sunday, Feb. 26, next week. I’ll be there for Daisey’s second installment of daylight and delirium, laughing hard. Down with the Drumpf!

You will also find many many other delightful new and experimental performance arts, dance, and improv shows at the BLAST Festival at Shotgun Players, Berkeley.

Shotgun BLAST Theater Festival, Two Weekends with Mike Daisey, “The End of Journalism” and “This Is Not Normal”: Weds-Sun, February 15 to 19 and February 22 to 26, at Ashby Stage, Ashby Avenue and Martin Luther King, Jr. Way, Berkeley, California. Info: shotgunplayers.org