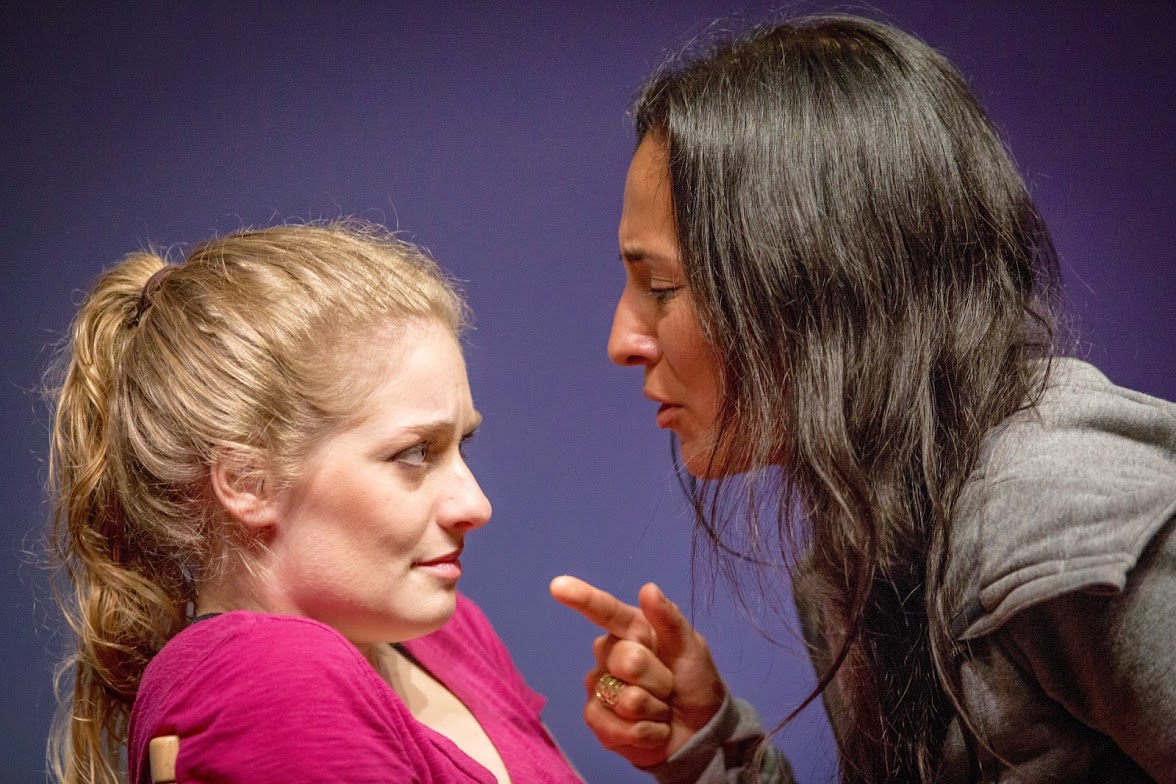 Director Robert Zimmerman goes full tilt to keep us on board for the ride in “Four Dogs and A Bone” (1993), a funny, bitter thriller with lots of laughs and energy, like a roller coaster ride. The bold opening of this indie film industry satire captured me instantly: A mountain-sized man in bright colored sweats is lying on the floor, while a sexy young girl straddles him. As she tries to perform yoga, she is describing her mind-boggling early life. Her story is startling, dreadful, and hilarious. But he remains dead-pan. With this raunchy opening, Zimmerman sets the speedy tempo for John Patrick Shanley’s high-octane dark comedy.

“Four Dogs and A Bone” uses typical film industry players: the ambitious sexy starlet, the devious producer, the innocent young writer, and the fading leading lady. Happily, playwright Shanley gives us vivid portraits the four characters whisking around the stage. They are so caught up in their opportunistic intrigues, we are delighted to meet them, though you would not lend any of them money.

Ambitious young blond actress Brenda (Jacqueline O’Kelly), is vulnerable to compliments despite her ruthless drive. Brenda has many of the best lines and O’Kelly delivers a pitch perfect performance.

The flamboyant middle-aged producer Bradley (an assertive Robert Shepard) forcefully sets about solving his budget crisis, unhampered by conscience or scruples: “Sometimes character is an obstacle to be overcome.” Because Bradley is big, loud, and silver tongued, we have to pay attention when he is at work.

Merciless leading lady Collette (Elena Ester) desperately fights to ensure that her next part will be a starring role and not “someone’s aunt with cancer.” Ester never falls into a stereotype, keeping Collette vital. Colette has moxie and brains even if she is devious and difficult.

The initially forlorn young writer, Victor (Carlos Flores) starts out trying to survive, while misfortunes pile on. Ostensibly the least selfish of this crew, Victor begins a little detached, but determined. Flores’s fluid facial expressions reveal his emotions, as he ably handles Victor’s evolution from rookie to pro in film-making.

There is always plenty for these characters to talk about: a dead mom, being “incested,” rectal ulcers, weather insurance and showbiz philosophy, for starters. Their conversation is fast, sharp and blunt. Also, frequently clever, as Bradley say of his cinematographer: “An idiot, I hope, savant.”

Their combat unfolds in four scenes, the first three featuring one character trying to out-maneuver another. Like “Survivor,” each tries to dominate, or goes into cahoots as circumstances dictate. In the final scene, all four connivers come face to face in a battle-royal where everyone’s secrets explode into public view. A real reality-show finale.

We don’t have to dig for meaning in “Four Dogs and A Bone.” We are looking at the Trumpiest traits of the U.S. economy. This is a clever, stinging look at indie film-making, but it fizzles as a serious examination of the industry. We are here to watch competing egos fighting for their bone. Their maneuvering has little to do with art, truth or beauty; but everything to do with controlling what happens next on the set to advance a career. Blunt and shameless in their scheming, only silicon injections could make these folks more upfront about their designs.

Playwright John Patrick Shanley’s credits include the play “Doubt” (Pulitzer and Tony Awards) and an Oscar for Best Screenplay for Moonstruck. He also did the screenplay for the movie of Doubt, with Meryl Steep and Viola Davis. “Four Dogs and A Bone” premiered off-Broadway. Shanley says he wrote the play in six days, with the goal of reporting “the astonishing things” he witnessed while making movies.

I was chilled to learn from an interview that Shanley says most of what the characters say and do in the play come from his repeated experiences. Bare sets (an office, a bar) serve as simple backdrops for these four to parade and bark.

The contrasting use of bright color in walls and paintings, set against white, effectively mirrors their colorful language and bright personalities. Firescape Theatre and the Beverley Hills Playhouse of San Francisco give us a loud and fast evening—you won’t fall asleep.