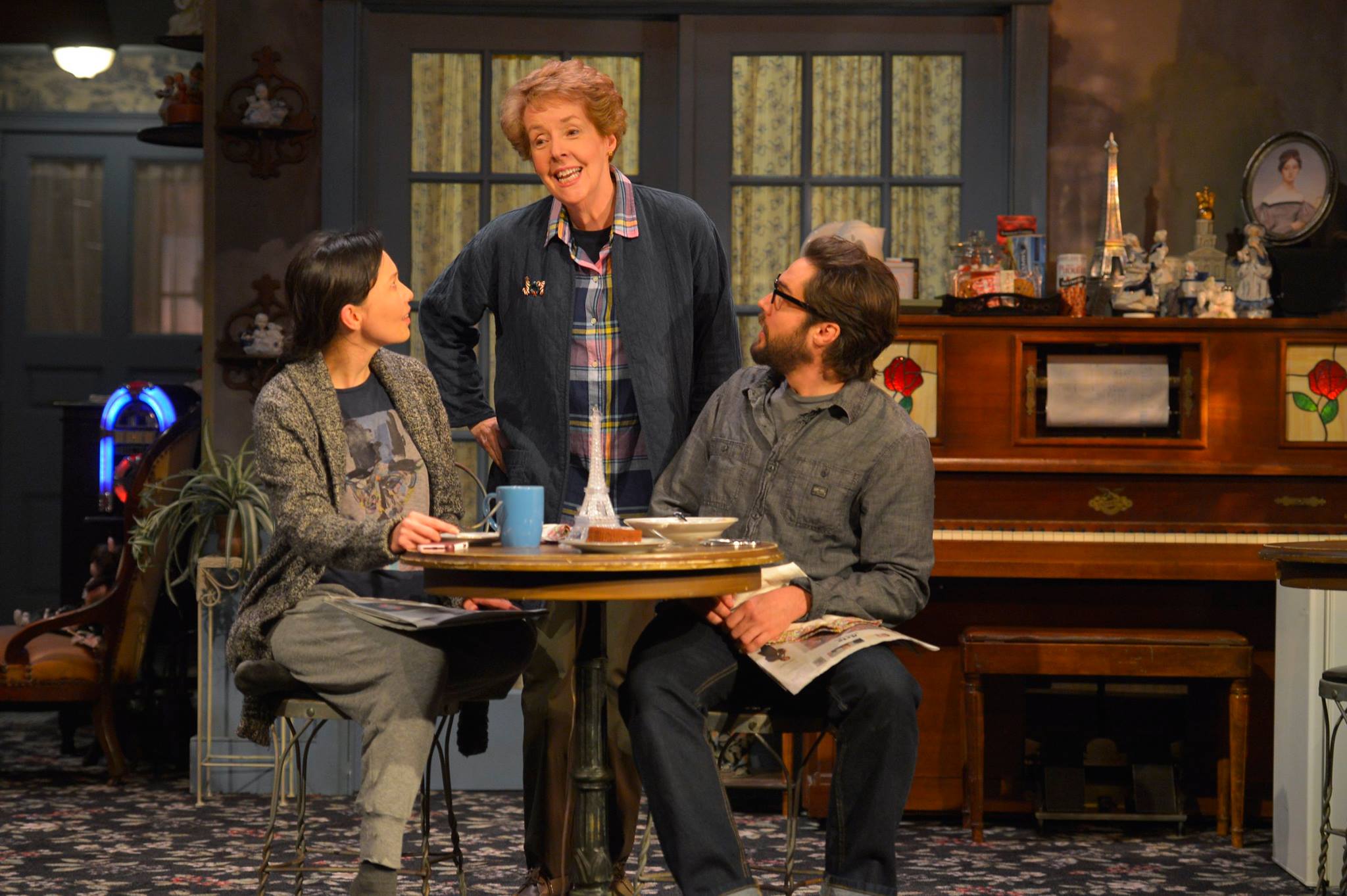 A play that includes orgasm from congress with the universe, a shaky partition between the real and the otherworldly, looking for love in the wrong places, as well as deep philosophical matters, asks a great deal of attention from an audience. In the case of “John” by Annie Baker, we have to consider a “Larger Presence” and Neoplatonism, both tossed out for our contemplation. Baker makes us think, and I, for one, welcome thinking about it for a long, long time.

Annie Baker’s “John” manages a neat trick, creating a study of doubt and madness that is also spiritual, hopeful, and feminist. Amid the small details of ordinary life, we keep running into extraordinary circumstances, always eerie, and also a little terrifying. “John” raises shadowy possibilities but leaves us to find our own way. We must decipher any meanings, though we are granted encouraging moments of grace.

All the action is set in an over-loaded great room of a Bed and Breakfast, stuffed with dolls, juke boxes, Christmas ornaments, and thrift store collectibles. The comfy room is decked out for Christmas, complete with a tall twinkling tree and religious music. You may have been in a room like this. Maybe a cutesy inn, or maybe visiting the home of a single older woman who knits stuffed animals, or collects Hummel figures, with lots of tchotchkes on display. Here we have a collection of dolls to keep watch over us (possibly literally) in a B&B on the edge of the Gettysburg Battlefield.

Georgia Engel plays Mertis, the B&B proprietor, the role she created for the 2015 premiere at New York’s Signature Theater, and for which she received an Obie. (If you remember the Mary Tyler Moore Show, you will recall her as Georgette.) Engel’s Mertis can make us laugh, cause us discomfort, or move us with equal ease. At first Mertis seems a quaint, old-fashioned woman, a little lonely. We soon learn differently. She is landlady to a house with a mind of its own. She is a bit of a mind reader. She is on an unusual diet plan. She reads Lovecraft. She writes fantastically—in the mythic sense—and with an unexpected vocabulary. She is the heart of this play, the source of hope, grace, and sheltering. She moves us deeply when she describes her love of birds, or when she first saw the man she loves. When she is not offhandedly giving rise to mysteries, she is offering food, kindness, and counsel.

She manages more than the house; she has a little in common with the Stage Manager in “Our Town.” She laboriously pulls the curtains open, herself, to start and close each act, causing the action to come alive or to conclude. Each time she performs the god-like act, we are charmed—we laughed and clapped. Mertis may also have some power over time: You can decipher that riddle yourself, when you see the play.

Her older buddy, Genevieve, played by Ann McDonough who lets us see and feel Genevieve’s profound rage. Genevieve’s a no-holds barred, blind woman with a wicked tongue. She walks the fine line between psychotic and mystic. Years ago she was driven mad with the thought of her ex-husband entering her head to possess her. Genevieve eventually began life anew, but then went blind. Madness and blindness? Surely she must be a prophet, but her messages are mysterious and funny, for example “The thing about being crazy is that it might all be true.” McDonough makes the mad, angry Genevieve as enchanting as she is strange.

Jenny and Elias (Stacey Yen and Joe Paulik), a young couple traveling from Ohio back home to Brooklyn, stop at Mertis’s B&B to tour the battlefield that was home to the greatest slaughter of the Civil War. They are a couple on precarious ground. Jenny writes questions for a game show as a career. Jenny is fragile, and her unusual relationship with inanimate objects complicates her life.  Yen’s Jenny is utterly believable whether confused, suffering from menstrual cramps, or tipsy.

Elias, a drummer and sometime computer programmer, is a changeable kind of fellow. He jumps from resentment to self-loathing to ardor. He is capable of cruelty to and passion for  Jenny. All during their spats, he remains ever-polite to the older women. Paulik handles Elias’ ups and downs convincingly.

Elias is Jewish and Jenny is of at least partly Asian descent. Elias attempts to use cultural differences to explain the troubles in their relationship. We quickly learn that more knotty psychological problems bedevil this “sweet” young couple on their way home to Brooklyn.

“John,” the cryptic play, has much to love. In Act Two, all three women spend the evening talking over wine, ranging from Genevieve’s mental illness to Jenny’s relationship with dolls to Mertis’ philosophy.  In Act Three, the ever-hospitable Mertis reads to Genevieve, just two women passing the evening together. They weave a magic made of silences that lends a mystical air to the slowly unfolding dark and light.

Speaking of lights, the Christmas tree has a perplexing magic as its lights appear and disappear. Robert Hand, the Lighting Designer, uses light and dark, through candles, lamps, and the sun to give us hints to pay attention. Hand makes us aware of that suddenly shaky wall between us and the otherworldly. Other hints to tease us, such as a doll collection, the mysterious  music, and the recurring puzzle of who is a “Watcher” and who is being watched—all pile up to make a spooky mystery.

Pulitzer-Prize Winner Annie Baker displays a scrupulous choice of words, providing us with real humor and real foreboding.  It is of course wonderful to see a play with meaty parts for two older women; it seems almost Un-American. It is heartening, too, to see the interplay between the generations. The young couple are unseasoned, trying hard with each other but failing. The older women want to help and stay present for the young couple, but ultimately can only watch and offer patient good will and a kind of clemency.

Be prepared for a long play, three hours with two intermissions. Annie Baker is known for her characters speaking naturally with ominous silences and false starts. Time passes more naturally here than on TV. Director Ken Rus Schmoll excels in handling the pacing for this unusually quiet production and succeeds most ably in producing a convincingly ghostly ambience.

Be aware that “John” starts promptly—arriving more than 20 minutes late means waiting to the first intermission for seating.

As Genevieve says, “Everyone knows someone named John.”  Watch this “John” and you might find out who is watching you.