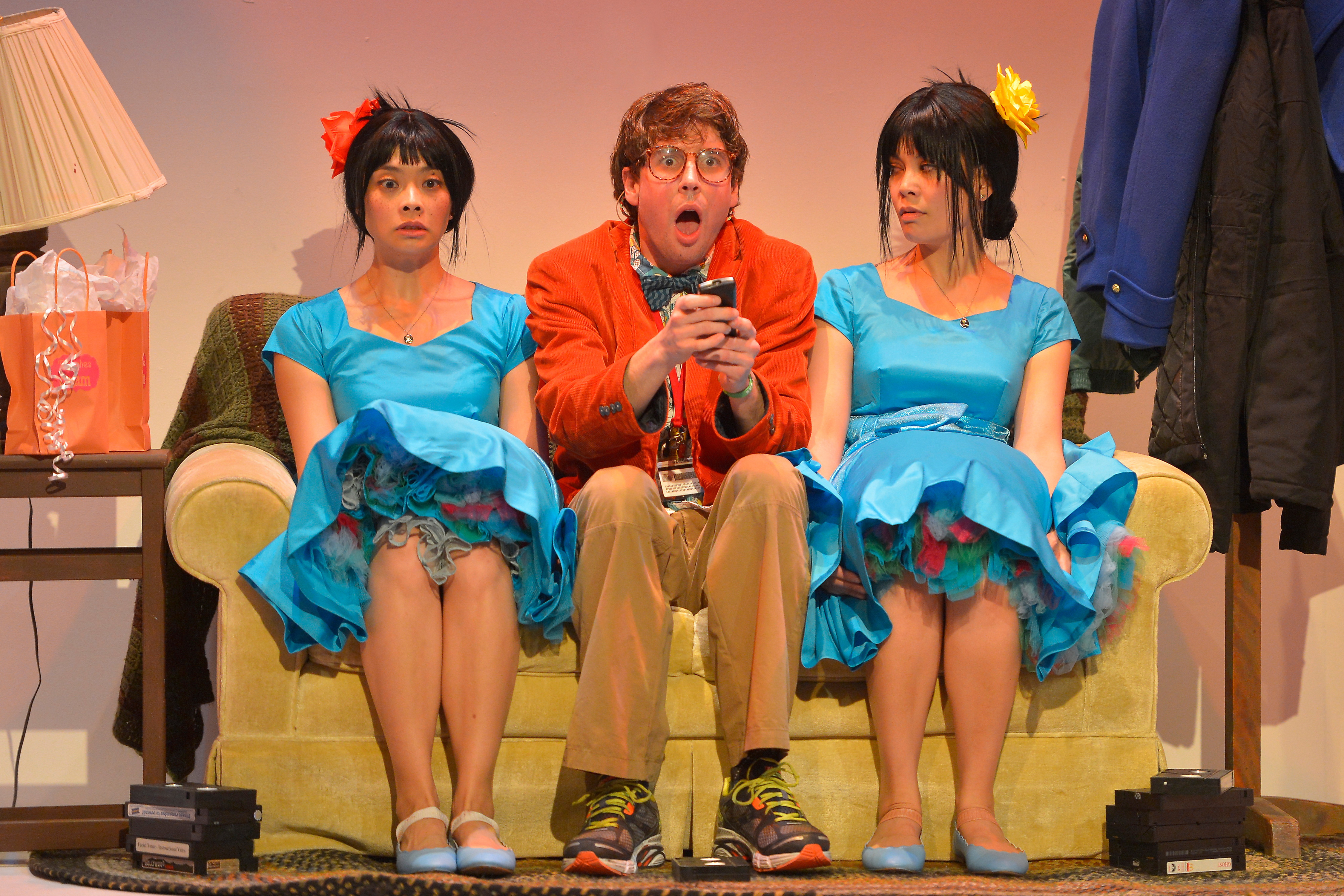 Every detail in Jiehae Park’s “peerless” goes way Over the Top. The Barbie-Doll dressed Chinese American twin sisters, M. and L., choose a high school in a remote midwestern suburb to increase their chances of early admission to “The College.” They are riveting and hilarious as they bombard us with speeded-up micro-conversations. Director Margot Bordelon has brilliantly created a funny speed-dream of h.s. terrors.

The twins, have over-planned their academic journey from high school to college, and woe to anyone who gets in their way!  They even lie to get into separate years, to avoid competing with each other. Their idealization of “The College” reveals a common elitist fantasy, these days.

M. (an anxiety-ridden Tiffany Villarin) must be a high school stand-in for Macbeth because she hesitates, and is shy.  Meanwhile, L. (an amped-up Rinabeth Apostol) must be Lady Macbeth because she is the bold, brash brains of the scheme. L. and M. are conspiring at their strategically selected high school, planning to move on to the best college, the best early admission, and with the best grades. Who can possibly stop them?

Well, first of all—they dress identically, with yellow and red backpacks or bright blue short prom dresses, and they speak at a breakneck super-speed, like poets at a Slam. They are awkwardly self-conscious about their macabre plans and they address the audience, directly.  “peerless” is a brilliant, speedy cartoon with rapid fire, comic speech, and sketch-skit styling. The fired up, young cast delivers superb comic performances and movements: A technical wonder that flies by, with lots of loud guffaws, at 82 minutes.

Adding to the controlled mayhem, three large door-panels swing up to reveal farcical scenes at the high school, in a friend’s home, or in the gym. The scenes are like cartoon panels where ridiculous plots pop up and spin out of control. It’s a living cartoon where the bright colors, loud noises, and special effects define the characters.

Chief among their enemies is Dirty Girl (a dreadlocked Rosie Hallett) who swings all over the stage in her dirty duds. As a delightful teen-aged witch out of Macbeth, D.G. sees through the Machiavellean sisters and utters dire prophecies. She hates them and their intellect and their scheming. She is alt, and they are geeks.

On the other hand, a sweet geeky formerly fat boy loves them—he is D (a spot-on Jeremy Kahn), a noble King Duncan who tries to make sense of the capitalist competition laid down by M and L. Kahn runs us through D’s troubled adolescence, his former fat fingers, and other anxieties to pretty much send the show through the roof. He leaps, he apologizes, he dances, he sings, he tries to date at least one of the sisters—he really can tell them apart. He is a delight to watch, as he becomes their Number One Victim—because he won the early admission slot to The College! He has displaced M. and L.—a dangerous game.

Well, there’s the BF (a puzzled and charming Cameron Matthews) based on Banquo/Fleance, and there’s D’s brother (a hooded Jeremy Kahn, again), and a Preppy Girl (a spiffy Rosie Hallett, again)—all of which gives us the snarky structure of a typical U.S. high school. Add a whiff of egotism, narcissism, entitlement, and murder—and you get a peerless look at U.S. cross-culture envy of the Other.

The play could profit from filled out minor characters, a fuller climax, and more of those eloquent speeches that define the characters and put down their peers. Every kid thinks he’s peerless, but L. and M. really are without peers. It’s a cultural mash-up—between immigrants trying to fit in and a closed culture that pulls down those who strive as much as it welcomes them.

“peerless” portrays the quixotic claims of equality and opportunity that U.S. culture seems to offer, but then pulls the rug out. In fact, the so-called elite schools Rule.  Private colleges rule by the power of the pocket book and by our own anti-education elitism. Jiehae Park exposes the hollow claims to fair treatment in a system that dotes on “private” colleges—wheich do not even deliver what they claim.

What happened to the FREE University of California, for example, that we had before Reagan? No one even remembers that the Constitution of the State of California STILL STATES that the Universities in California are legally “FREE.”

Playwright Jiehae Park and Director Margo Bordelon leave no doubt that “the game is rigged.” Sound familiar? You will laugh out loud and then cry out against the lost potential in the rigged anti-educational system on stage and off.