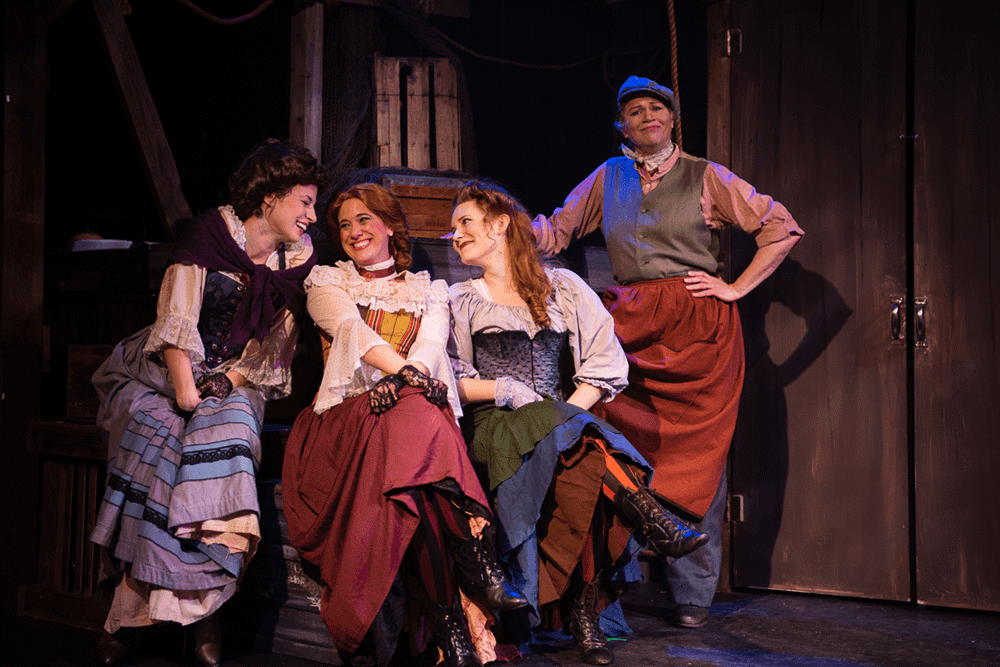 Lovers of musicals rhapsodize over how song and dance transform stories into epic events with emotions larger than life. They delight in the escapism of singing your problems away. All valid. But I stand with Stephen Frye who said attending a musical is “a celebration of talent.” 42nd Street Moon and Director Daren A.C. Carollo provide us ample opportunity to enjoy multiple talents with “New Girl in Town.”

While the musical follows the plot of Eugene O’Neill’s dark “Anna Christie” (1921), it sails to a more lighthearted tack. A long-lost daughter locates her father, a barge captain on the New York waterfront, who thought he left her to a bucolic life on a Minnesota farm after her mother died. Instead, she was treated as a servant and sexually abused. She ran away but ended up in prostitution. Give her a love interest, complicate matters by her sexual stigma, then add jealousy from the captain’s girlfriend, Marthy.

Allison Rich captures daughter Anna’s bitter defensiveness, as well as the yearning for something better. Her first act song “On the Farm”, eloquently strikes an unusual, tart note, explaining to Chris, her father, that things were less wholesome in the country than he imagined. stands as an eloquent revelation That Was Love”) and in duet with her love interest Matt. The two are charming together with their “Did You Close Your Eyes?”

Joshua Marx plays Matt. Marx’s powerful voice stands out even in this ensemble of strong voices. His Matt is simple, vibrant and appealing. His solo love song “Look at ‘Er” kills.

The hard-drinking, hard-headed father and barge captain Chris (Chris Vettel) cannot hide his sentimentality. His plaintive song “Anna Lilla,” when he learns he will soon see his long lost daughter, provides a touching close to the first scene.

Judith Miller as Marthy, the captain’s shrewd, boozing girlfriend, provides much of the comic relief. Whether sober or drunk, kind or jealous, Marthy gives us lively fun.

The songs may have failed to go down in musical history (I heard no one leaving humming any of the tunes), but all are clever and enjoyable. “Roll Yer Socks Up,” an anthem of sailors at home on leave after months at sea, sung with the bar women welcoming them, energetically opens the first act. Comedy numbers like “There Aint’ No Flies On Me” (dancers dressing for a ball) or “Flings” (reminiscences by the bar women) stand out. We go to musicals just to hear lines like: “Flings is wonderful things / but they got to be flung / by the young.”

Bethany Deal does a stand-out job with colorful, believable, and charming costumes.

Mark Mendelson’s superb sets create the atmosphere, including the New York waterfront—complete with fog, a bar, a barge, and dance hall.

This adaptation of O’Neill’s Pulitzer-winning play “Anna Christie” to a musical form in 1957 maintains 42nd Street Moon’s tradition of presenting lesser known, rarely produced musicals. Bob Merrill wrote the music and lyrics, and George Abbott the book. Both men have long resumes, but Merrill is especially remembered for the music and lyrics for “Carnival” and the lyrics for “Funny Girl.” Abbott won a Tony for ‘The Pajama Game.”