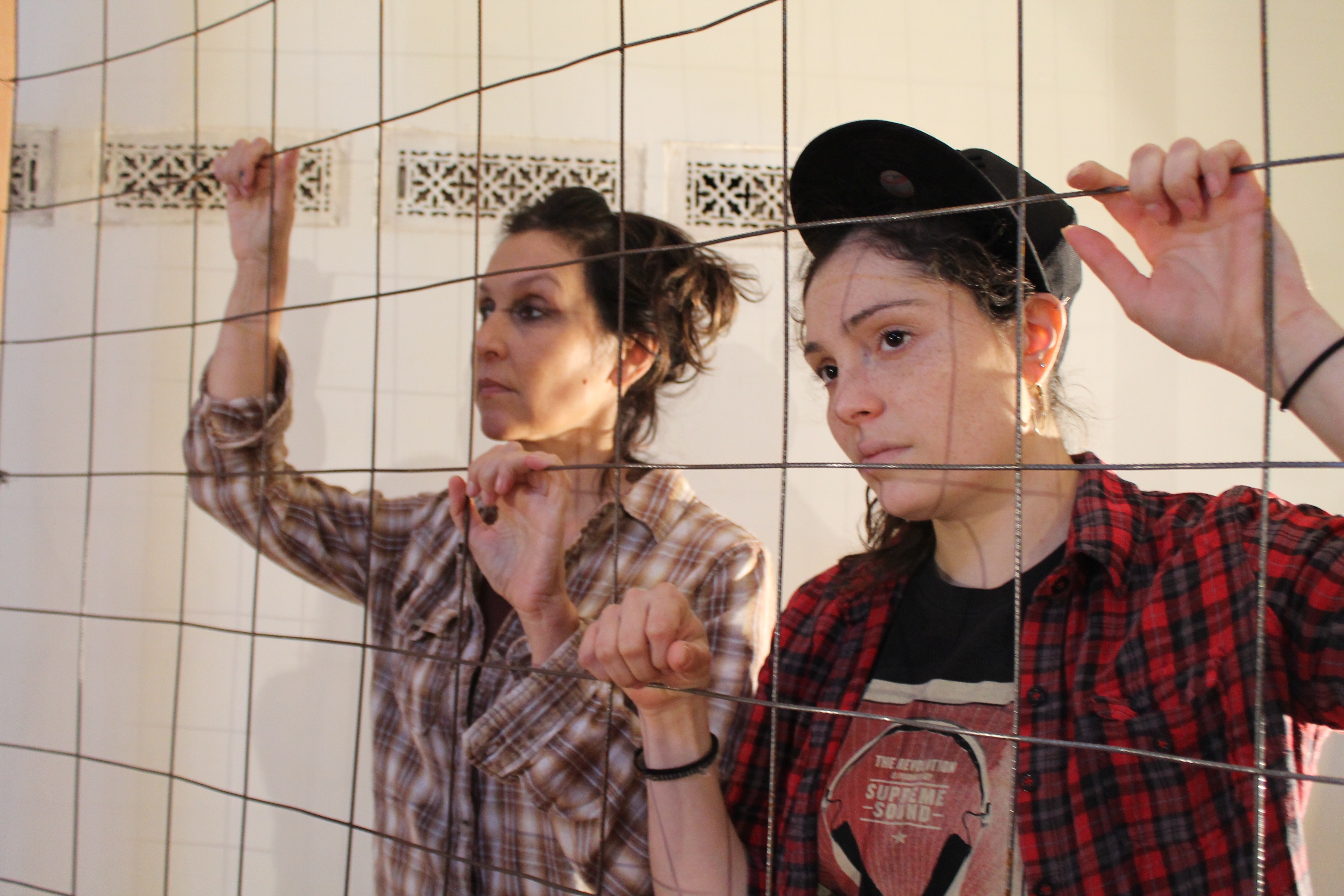 Ubuntu Theater Project’s “To The Bone” by Lisa Ramirez shocks us with its immediacy.  Writer and lead actor, Lisa Ramirez brings us this brutally honest play about five immigrant women working—under degrading conditions— in a poultry factory in New York state. Olga (a ferocious Lisa Ramirez) dominates and bullies her Latina friends.

Olga’s rebellious daughter Lupe (the sparkling Juliana Aiden) turns up the heat as a powerful, wisecracking, and streetwise juvenile who works as legal aide while going to college. The play opens with three of the actors moving slowly on a dimly lit stage in a set encircled by a hog wire fence,  designed like a chicken coop. The wire fence forms the see-through  walls of the magnificent, prison-like coop, designed by Giulio Cesare Perrone and Marcel Castanchoa. Director Michael Socrates Moran makes this a tight and thrilling show, with every moment captivating.

As the light comes up, Juana (the haunting Sarita Ocon) sleepwalks aimlessly, draped in a black plastic bag, talking to herself. The chairs and tables also look like smaller chicken cages. The striking and innovative lighting by Stephanie Anne Johnson make the bare circle into an effective theater in the round.

There are no bad seats in this space where the audience sits right on top of the action. Director Moran allows each actor to command her own space and to connect with the audience. We become co-tenants of the dismal apartment shared by Olga, Lupe, Juana and Reina (an emotional-filled Wilma Bonet).  Although they argue and suffer, these women from several Latin countries are each trying to make a living, repetitively slicing chicken breasts in the poultry factory. Their slicing motions at work make a touching ballet out of their job.

Despite the drudgery and harsh conditions, they are unable to leave, trapped by their undocumented immigrant status. Only fierce Olga has a green card. They are treated brutally by the conflicted foreman Lalo (the intense Francisco Arcita), who follows orders out of fear for his job, too.  They are all under the control Darryl (the mesmerizing William Hartfield), the factory overseer who abuses the workers and takes us back to Nazi concentration camps.

When Carmen (the sympathetic Carla Gallardo), Reina’s niece arrives after a harrowing journey from Honduras, she goes to work at the degrading factory, too, after a lot of warnings and anger. We are prepared for more explosions to come out of this power-keg of a workhouse, where workers are tossed out as quickly as chicken carcasses.

Sweet, innocent Carmen attracts the attention of friendly Jorge (the romantic Juan Amador), their shuttle driver, an immigrant from Guatemala. Naively in love with Carmen, he compares her to the beautiful Quetzal bird, which cannot survive in captivity. Unfortunately, Carmen falls prey to the evil Daryl.

The resulting conflict leads to a tragic climax that brings an end to the world as the women know it.  We cannot help but draw comparisons to the fear that embraces the immigrant today, oppressed by Trump’s disastrous fascist tactics. “To the Bone” thrives with superb acting, staging, lighting, writing, and direction. Lisa Ramirez, a force in the theater, brings us a message we need to hear, see, and contemplate. You want to sit outside that cage and live the lives of these incredible women. The actors deserve awards and hugs after such extraordinary performances.