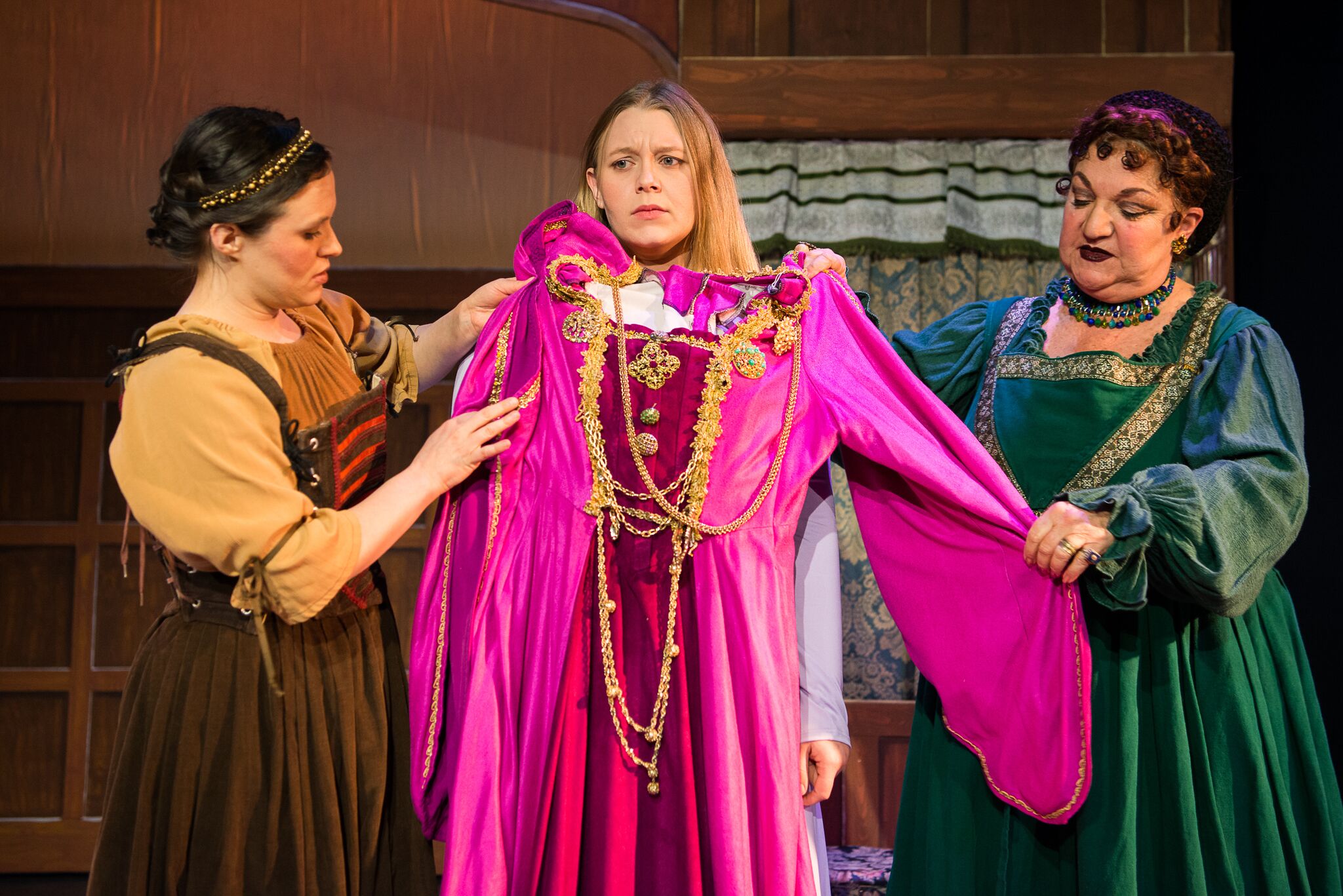 At the center of “The Lost Years” are secrets. The first is that teacher and poet Humphrey Bludgepot (a peppy Ben Knoll) is not exactly who he says he is. In short, he is a hack, who grossly inflates his qualifications, and who just might be the worst poet you’ve ever heard. The play opens as Mr. Bludgepot is trying to regain his footing after a night of fever and strange dreams that might not be dreams at all. His nurse and guide in this endeavor is Nona Underhill, played by the talented and striking Shannon Warrick. Watching Warrick spin a tale and manipulate egotistical Shakespearean characters offers a textbook for honest and generous acting, in this world premiere at Contra Costa Civic Theatre.

The banter between these two is witty, charming, and genuine, setting up a fondness in the audience that will endure to the last scene, despite some shortcomings in the production. The women are pawns in a man’s game, underdogs in the demanding and cruel Elizabethan world of 1599. In a play about language, Cynthia Wands’ musical Shakespearean dialogue flows naturally from Warwick and her rambunctious followers. And Lisa Danz’s lavish costumes sparkle with period color and texture, making a lush appeal.

Enter the premise: Nona’s niece, Isabelle Thomas (a charming Mikkel Simons) is due to be married the next day to an older, very rich man she barely knows. Mr. Bludgepot is tasked with writing a beautiful, moving, and appropriate toast for the couple. It appears a simple enough task, until attempt after attempt we see that Mr. Bludgepot, while ordinarily well-spoken, simply cannot come up with a line of acceptable poetry to save his life.  Instead, he puts his own special touch on lines stolen from his idol, William Shakespeare. “The Lost Years” earns most of its laughs—at horrendous turns of phrase as he strains to be Shakespeare, butchering the Bard’s lines as they come out of his mouth.

But there is a problem with the premise. It never evolves into a plot. Beyond Bludgepot’s hysterical grasping for the right words, not much happens. Bludgepot receives warm encouragement from Nona, and later, actor Richard Burbage (an elegant Mark Albi), both of whom have secrets of their own. Burbage, historically an actor and partner of Shakespeare’s, fills out the Elizabethan picture with lyrical lines from the Bard, well-spoken.

Poor young Bludgepot, however, endures ridicule from household servant Helena Bagwell (a witty Stephanie Goodman) and threats from the lady of the house, Catherine Thomas (an imperious Sandi V. Weldon). He basks in affection from Isabelle, who wants to be madly in love with Bludgepot. Actually, she’s just head over heels for any man who writes and recites poetry, no matter how hideous the verse. But the thin plot combines with a lack of stakes, leaving us craving more than beautiful language and manners.

However, the play is enjoyable. The writing is witty, sharp, sophisticated, and at times whimsical. The audience is transported to 1599 Lancashire by sheer force of the language, delivered with solid performances from the cast. There is a meta-theatrical aspect to the play, with so many secrets among the characters.  We are watching impostors perform. Underneath the acting, there is more acting—revealed at the end. A commentary on the truth and falsity of theater undergirds it all. In this new play, Director Marilyn Langbehn explores the highs and lows of women’s lives in a deliberately anti-woman world.

Nona works on a piece of embroidery throughout the action. She’s sewing it for her niece, as a wedding present. We learn fairly early on that Nona is a master seamstress, so this project takes on special meaning. And as the scenes unfold, is it clear that playwright Cynthia Wands has a bit in common with both Nona and Bludgepot. Shakespeare is her inspiration too, and she weaves his work, his story, and his spirit into the very fabric of the play. If there is one unifying factor, it is this embroidery thread, this tribute to the greatest playwright and poet that ever lived. Shakespeare is on everyone’s lips. He signifies the reaching for something more—the something powerful we feel in the face of great works of art, the drive to come as close as we can to creating something powerful of our own.

And despite the play’s shortcomings, there are indeed threads of a great mystery. Nona’s secret—a dark and old secret—has an emotional weight and resonance that reaches off the stage and into the audience. It’s this secret that lends the play its title, “The Lost Years.” They are Nona’s lost years, warmly delivered by the astounding Shannon Warwick, and Shakespeare’s own lost years that critics still embroider. We all have them, in one sense or another. How do we seek or use them? That’s Nona’s story, too.