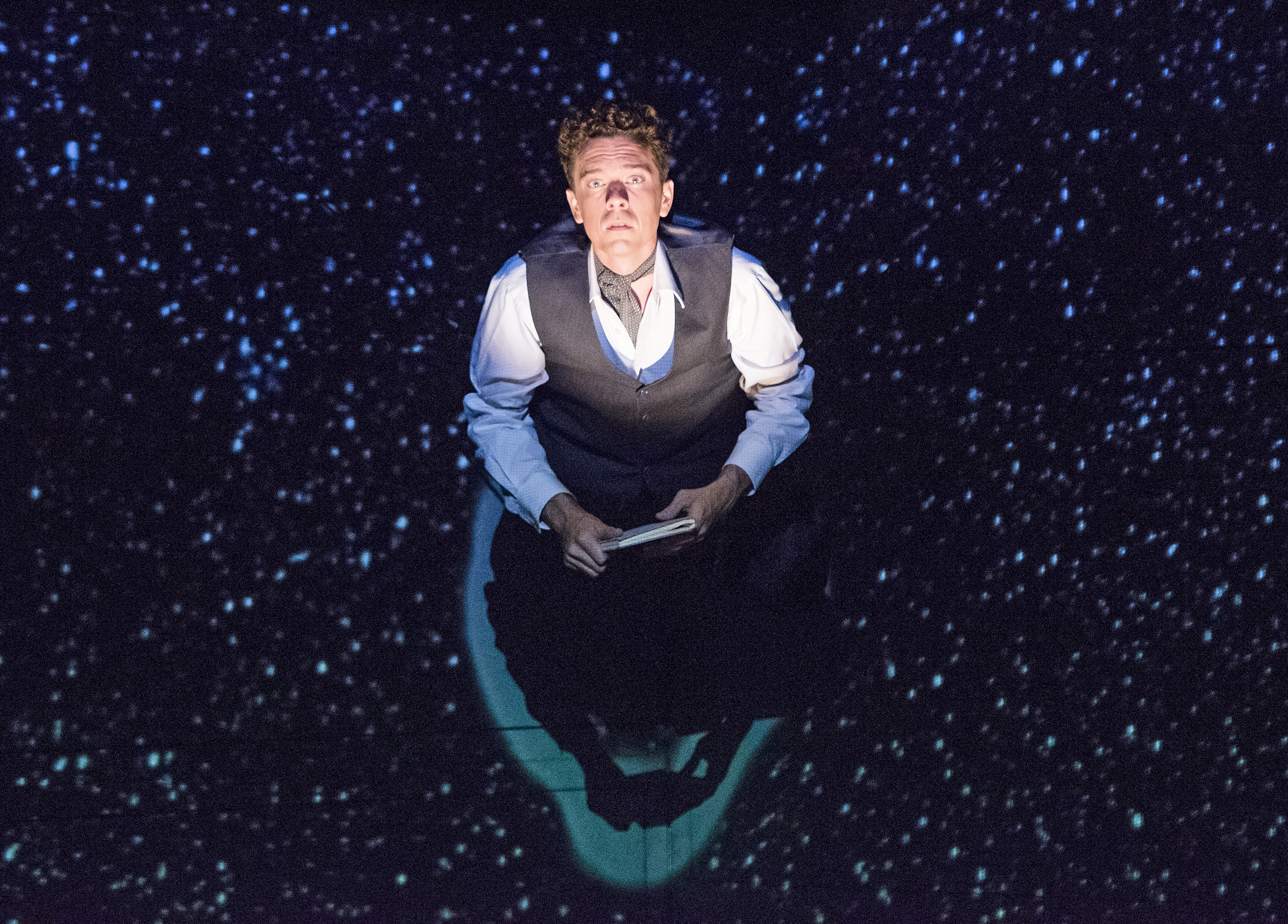 “Needles and Opium” bursts out of the sky, a spectacle of acrobatics, jazz, and human creativity. If you want to be enchanted and entranced, “Needles and Opium” overflows with originality and excitement. Written and directed by the acclaimed Robert Lepage, Quebec’s boy wonder, now 59, has brought his 1991 Ex Machina production from Quebec to the American Conservatory Theater.  His mysterious Canadian cube of lights and doors, of stars and histories blazes at the Geary Theater—a once in a lifetime spectacle.

Lepage has poised a large hollow cube onstage, hanging in the darkness, balanced on its angled point, like a massive squared ballet dancer. Suddenly, suspended in air, at the top of the cube, a man swings like an acrobat in the air, against a star sprinkled universe.  The actor (the adroit, hypnotic Olivier Normand) plays Robert, a Quebecois actor, as well as Jean Cocteau. He is the only speaking actor.

Suspended in front of us, in a starry sky, Normand becomes Cocteau, the bi-sexual poet and movie maker who lived in Paris, in the 40s and 50s. Cocteau astounded his readers and followers with poetry, plays, and movies. He wrote and directed Orpheus Descending, featuring the wistful Juliette Greco, singer and artist, the “Muse of Existentialism.”

Normand slips in and out of the role of Cocteau, the famous fey poet, languidly brandishing the poet’s pencil, floating in the air, walking up the walls, and vanishing through secret apertures in the slowly moving cube.

Suddenly, we are transported back to post WWII Paris, where it’s 1946, and massive videos portray the Café des Deux Maggots and the Café Flore.  We mingle with Simone de Beauvoir and Jean-Paul Sartre, and have coffee with Boris Vian, the surrealist writer and musician.  Existentialism rules the day for these artistic, intellectual, musical explorers of the mind. Socialism is in the air. They are projecting a new post-war world for France, for the world. The nostalgic videos swirl by—we are swept up in the café life with Picasso and Sartre and Greco.

But Juliette Greco, still with us, sings in a basement bar, strides the Paris streets on screen, wearing the mysterious post war trench coat. Greco is only an image, flashing on the rear of the cube—and Robert is a real person sitting in a hotel room, now, as the bed floats down, and disconsolately tries to call his beloved, back in Canada.

Robert is staying in the same hotel room where Juliette and Miles Davis (a seductive Wellesley Robertson III) plays his horn, but never speaks. Davis floats in and out of the space, falls in love with Greco and she with him. He joins her in a bathtub, he floats into her space out of the air. Miles Davis dances, twirls, enchants.

The room seems inhospitable and in motion:  doors and windows fly open, French telephones and English speaking operators refuse to cooperate. It’s the modern post-war man, pitted against technology. The cube spins, dancing on its point, turning in unexpected angles, bringing forth new scenes from Paris, New York, the streets, the skies, the balconies. We are there, with them, it’s theatrical and cinematic magic—woven by the crew behind the scenes, who take a gracious bow at the end.

Now Juliette has met Miles–he plays his fabled trumpet—enjoying his first taste of freedom and fame. Davis has never before experienced the adulation and ardour, denied him in America. Miles Davis and Juliette Greco fall in love, and a black jazz musician and a French singer do just fine in Paris in the 50s.

But Miles has to return to New York—and things go downhill, or down-cube from there—because a genius black jazz trumpeter faces rejection in America. He slides into needles and heroin. He plays his tearful trumpet.

What strikes us acutely is the terrible, implacable, unpredictable movement of the magical cube—hurtling through space. In an airplane from New York to Paris, Cocteau is writing his “Letter to Americans,” a bitter, disillusioned riposte to the U.S. The universe turns.

Cocteau, too, loses a lover, and slips into needles and opium.  Jean, the poet, playwright, and lover, is photographed by LIFE magazine with four arms. He brandishes his book, his pen, and his graceful hands. Cocteau inhabits the cube and the air, spinning on a sparkling axis.

While Proust searches for Remembrance of Things Past, Lepage of Quebec, the man of two or three countries, and a couple of incompatible languages, thrusts visions of his past into our present moment. He struggles to make us a future. We can join him, if we dare.