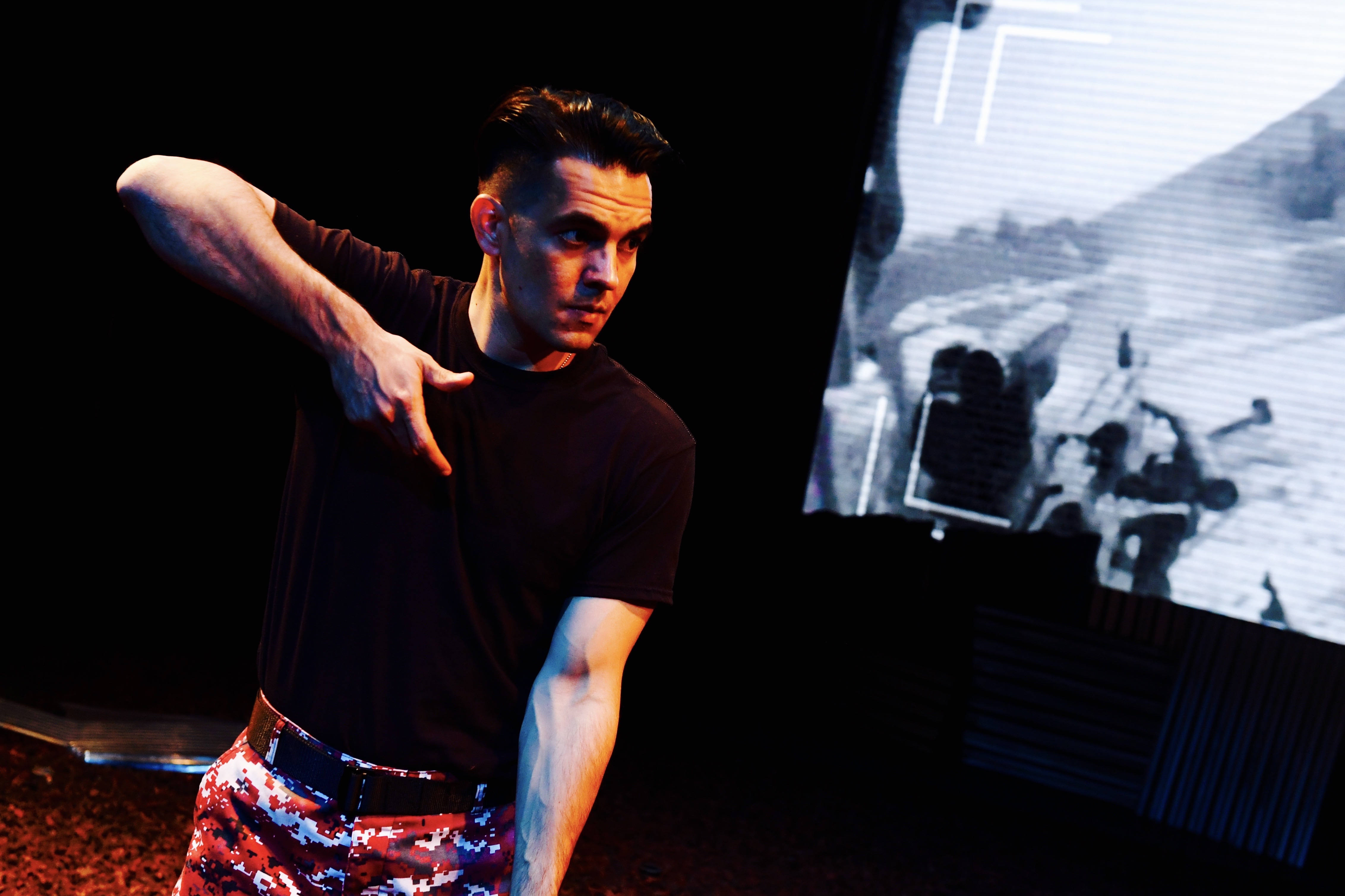 Playwright Donal O’Kelly refuses to shy away from political debate. In fact, he barrels toward issues like a historian scorned, and aggressively takes us along for the ride. It’s a bumpy ride, at times. The road he takes us down is more thematic than narrative.

Three soldiers, two men, one woman, are stationed at a U.S. Army base in Kandahar, Afghanistan. By claiming a small fraction of Native American heritage, the two male soldiers finagle permission to build a traditional sweat lodge on the American base. They construct a placid retreat from the war zone. Inside the sweat lodge’s protective walls, they bring forth—each in turn as the others listen—images and stories of war, resistance, sacrifice, and betrayal.

Seth digs deep enough to find that one-eighth of his genes come from the Choctaw tribe; so he can merrily join the sweat lodge idea. Once inside, Jack steers the discussion, peering through the lens of history to reveal arguments for his viewpoints about past rebellions and present conflicts. A backstory reveals Jack’s secret recordings in the war zone, on a USB thumb drive—the memory stick—which he intends to take home. But he is not the only one surreptitiously recording events, creating a deeper level of mystery.

These U.S. soldiers have some issues to wrestle: the morality of resistance, the oppressiveness of the surveillance state, and the need to rise up against authority. They aim at fulfilling the precept of James Connolly—a martyr of the Irish 1916 Easter Uprising—who said: “I will say a prayer for all brave men who do their duty according to their lights.” The soldiers tell tales that return time and again to those who act, with defiance and courage, “according to their lights.”

Kail, Lewis and Valdez are evocative storytellers, touching on subjects far ranging yet deeply intertwined: Custer’s last stand, the aforementioned Rising of 1916, Wounded Knee, Abu Graib, and Chelsea Manning. Their minds travel freely, far and wide, through time and space, as in a dream. They remember and speak of events that soldiers have no time to dwell on, events as dangerous as the bullets and bombs at Kandahar.

The set, like its spiritual space, spans time and space from the dark echoing memories of the sweat lodge, to Kandahar airport, to all the horrors these soldiers remember. The costumes convincingly evoke soldiers in the field, keeping us anchored in the Army Base, even as they travel the world in their visions.

Multimedia is used to good effect, when a screen behind them occasionally bursts into light with video and text. At one time a child’s face stares out at us, as if listening to the tale being told. At another we see two soldiers escorting a prisoner past a bleak barrier. Intermittently, text flows across the screen, revealing that the soldiers may have a bigger audience than just themselves.

The swirl of time and history and the universal struggle between power brokers and the people form the heart and soul of “The Memory Stick.”  Donal O’Kelly’s play tries to  reveal what makes us human—and what inhibits our humanity.