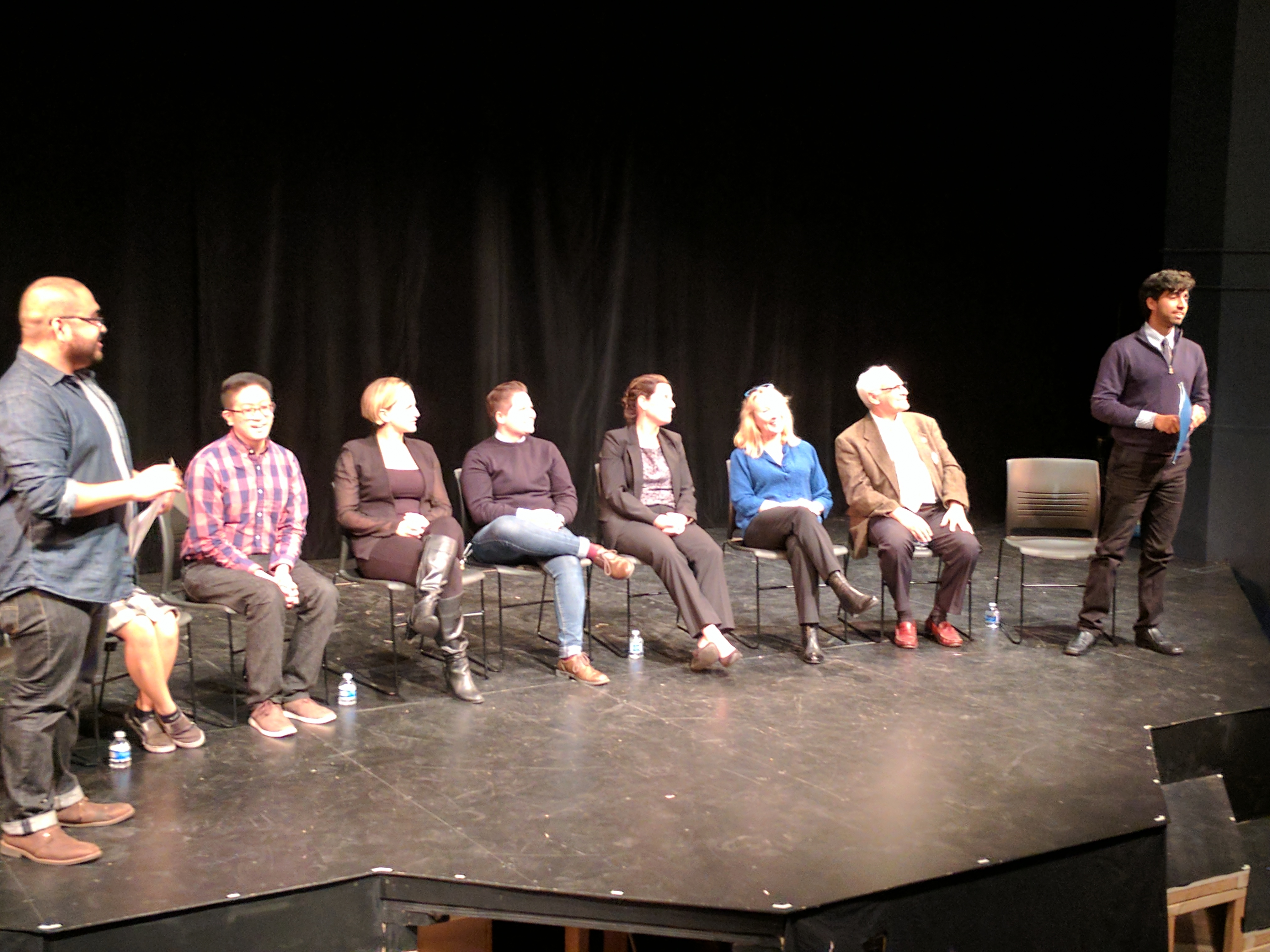 On Thursday, March 16, the U.C. Berkeley Department of Theater, Dance and Performance Studies offered its 2017 Alumni Panel to inspire students during a Q. and A. session between current students and theater professionals. When I entered the intimate and homey Durham Studio Theater at CAL, Berkeley, students are talking as they pick out seats in the small theater with a curved proscenium stage. About 40 students and faculty members have gathered to hear a panel featuring alumni from film, theater, journalism, opera, and theater administration. There are actors, writers, directors, and critics among the eight panel member gathered on the stage.

The stage lights come on and two current students, and six alumni members introduce themselves. The student moderators were Suraj Ramrakhyani and Julian Marenco.Among the panelists, the most recent graduation date is 2011 and the earliest in the 1970s. Actors, technicians, businesspersons, and professors share their success stories. The panelists are: Jonathan Amores, who co-ordinates marketing for  SHN Theatres in San Francisco; Beryl Baker, Operations Manager at Bay Area Children’s Theatre; Lori Holt, a leading actor in S.F. since acting in the first production of Angels in America; Barry David Horwitz, retired English professor, now Editor of Theatrius; Elkhanah Pulitzer, Opera and Theater Director, from L.A. Opera; Joy Regullano, actor in L.A. and creator of You Tube’s “White Fetish”; and Lauren Selman, who brought green consciousness to Hollywood and currently is Logistics Manager for the Oscars Awards.

“I remember learning how to show up and be consistent,” says Beryl Baker, Operations Manager of Bay Area Children’s Theatre, when asked what she remembers most of about the theatre program at CAL.

Suraj Ramrakhyani, student moderator, asked, “What should we Berkeley students doing outside of school?” The response from the panelists was unanimous: “Internships!” they all agree. Apply for internships during the summers, or if you have time during class sessions. “You have to date the job” says Lauren Selman, award winning director. She is actually the Logistics Manager for the Academy Awards.

Jonathan Amores, Digital Marketing Coordinator at SHN Theatres, tells how he obtained a full time marketing position from an internship after only one day on the job. “Oh and write thank you letters too!” chimes Selman. During the internships and other facets of life we should pay attention to how we network.

Julian Marenco, student moderator, asks,”How can you turn your passion into a sustainable career?

“Theatrius Founder and Editor Barry David Horwitz replies, ” You’ve got to jujitsu your career … try surprising people with your ideas. Make what you want to do into a new job for yourself. Make the job uniquely your own.”

Horwitz is also a retired English and Drama Professor with former students from all over the world, including U.C. Berkeley.

“Be your own best representative” advises actress and writer Joy Regullano, who has her own YouTube channel. Panelists agree that although social media is important, we should remember to put our best foot forward even electronically. “Edit all of your emails,” adds Amores, explaining that people judge you by what you post–so be careful.

Panelists with all different backgrounds talk about the freedom and hands on experience U.C., Berkeley allows with its rehearsal and performance studios. They go on to explain how faculty members advise and encourage students to create their own work

The delicious Mediterranean dinner provided by TDPS ended just in time to head over to the Zellerbach  Playhouse Studio to catch “Love and Pride,” a brand new musical written, directed and choreographed by TDPS’s Sy Bocalbos Jordan, featuring an original electronic score.

“Love and Pride” follows six inter-connected characters through San Francisco’s landmark festivals and celebrations as they learn to respect and appreciate all expressions of sexuality and identity. Jordan, a theater and gender studies major, conducted interviews in order to create characters who portray struggles on the gender spectrum. The original music is as diverse as the characters, ranging from rock opera to electronic to hip hop. The musical leaves us pondering our own locations on that spectrum.

“Love and Pride” represents a hint of the varied talents of CAL Berkeley’s TDPS program. All you have to do is jujitsu your way.