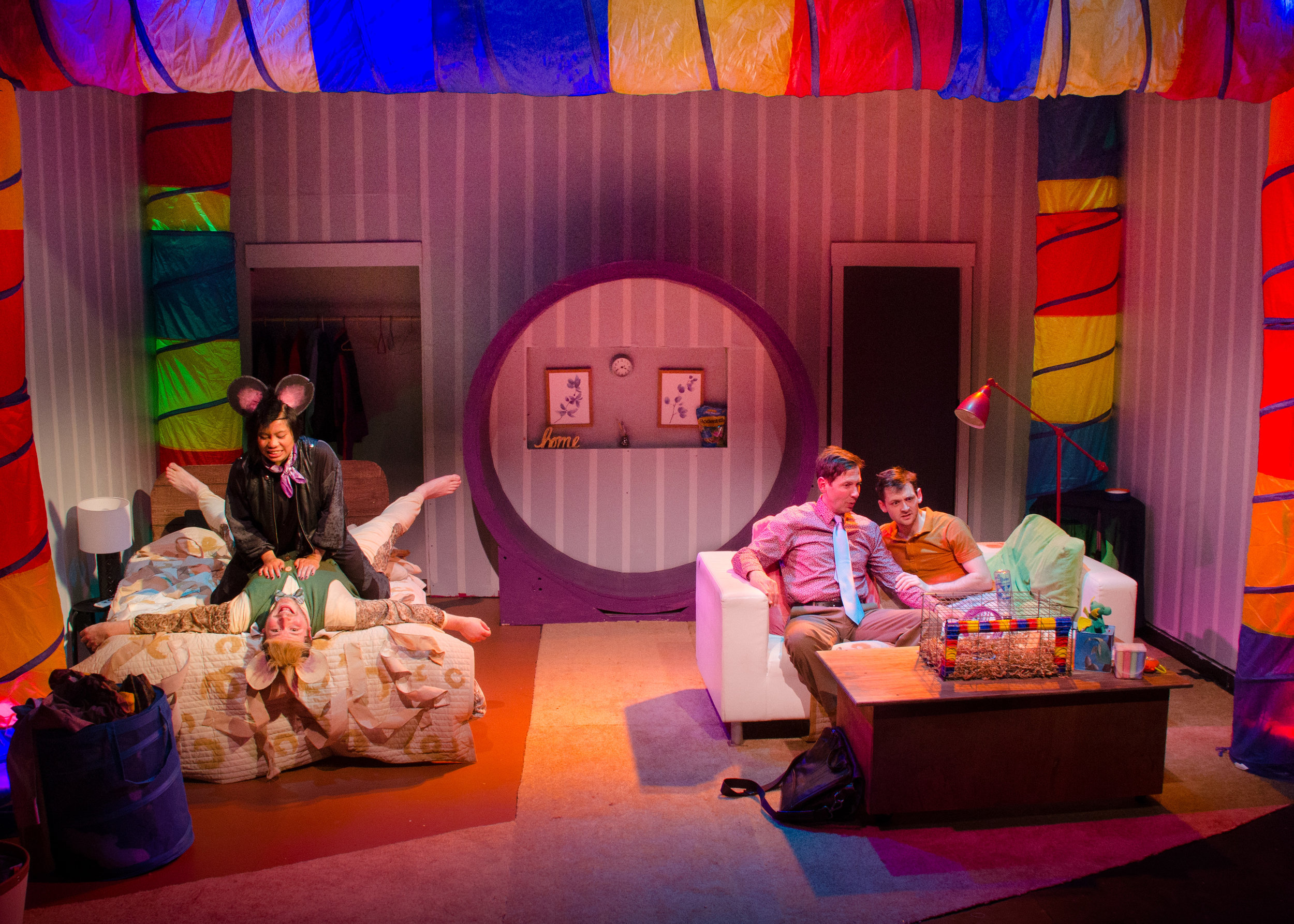 Playwright Dan Giles presents “Breeders,” still warm and throbbing, full of love, passion, queerness, and quarrels at the FaultLine Theater, in San Francisco’s PianoFight. The set is rainbow colored, cartoon-like, and astutely designed. The main stage mirrors a hamster cage that sits on the table in the living room. What seems like a piece of modern furniture turns out to be a fully functioning human-scale hamster wheel. The wallpaper is made up of simple vertical lines—which mimic the bars of the hamster cage.

Gay lovers Dean (Sam Bertken) and Mike (Ryan Hayes) have been dating since high school. They are expecting a baby soon—and Dean’s having second thoughts. Their intimate time spent together as a couple has been wavering—they don’t show each other much affection, these days.

Dean, a more sensitive guy, longs for the attention that Mike no longer provides—so he looks for attention elsewhere. Mike, a work-focused, logical young man with a rigid schedule, spends a lot of time acting empathetic for other people. The two cycle through conflicts about the coming baby, about Dean’s interactions with other men, and nighttime fights about work. They also argue about the two hamsters on their living room table.

In a real-time parallel world, the two rodents, Jason and Tyson (Neil Higgins and Nikki Meñez), are also busy fighting—again. They recently found out that Tyson is actually a female—through sex, of course—and are expecting nine little pups anytime now. Jason, a terminally delightful chubby guy relies on optimism as his go-to feeling. Jason is head over heels in love with Tyson and the idea of their hamster babies. Tyson, on the other hand, a cynical, dry rodent, doesn’t give “a rat’s ass” about Jason and the pups—she just wants to live her life (a total of 2-3 more years) without annoyances.

Interactions arise from rapid dialogue between the characters—dialogue that overlaps between the two pairs of characters, making their arguments both realistic and larger than life. Their debates parallel everyday couple’s fights, adding to our ability to sympathize with both sides. Mike and Dean play the gay couple quite well, although a few times it seems that Mike is uneasy when he comforts Dean after a quarrel.

Tyson and Jason, our domestic hamsters, have a stellar dynamic—their actions flow from each other, rhythmically. Tyson’s facial expressions are EVERYTHING–particularly when she interacts with Jason. We see the disgust on her face as soon as Jason raises an objection to the babies.

This mash-up of realities and species makes “Breeders” a real treat—with super-duper hamsterized high jinks—better have a good laugh, and see it before the big wheel turns.