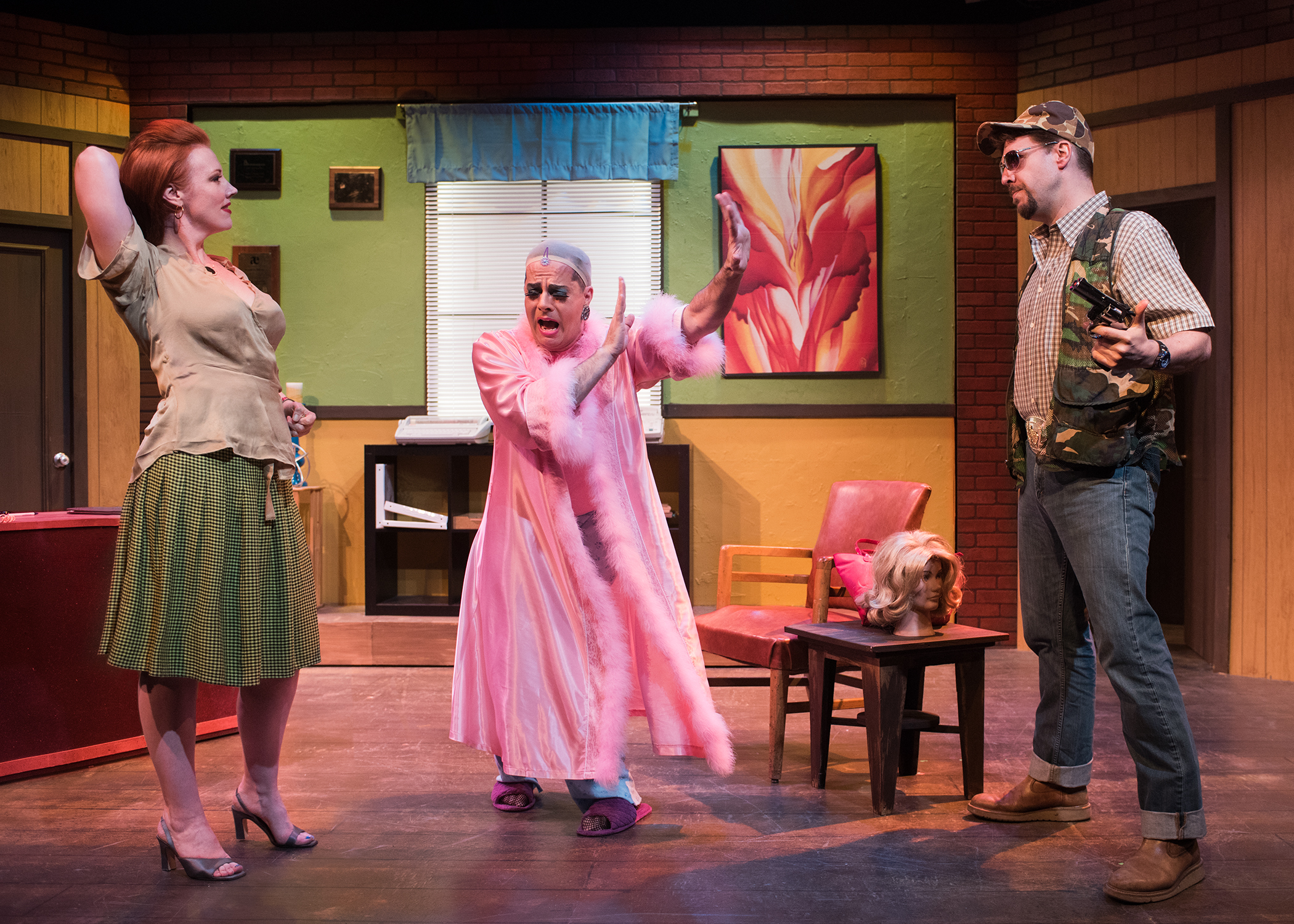 “Sordid Lives” has been a movie, but now it’s live, onstage at NCTC, and you want to be there for the fun and for the revenge on all those families who never understood the value of their sons or daughters.

In “Sordid Lives,” you will find rich helpings of gay nostalgia, depression, and drag. Writer Del Shores camps up a sensational satire of Texas attitudes, on fabulous display at the New Conservatory Theatre Center. Maybe you think gay folks got out of the closet decades ago. Wrong! Turns out that anti-gay feelings are flourishing. Homophobia is alive and well in the crotch of the Lone Star State—among other places.

Young and talented Luke Brady stands out as Ty Williamson, who has fled Texas, and is now a gay actor in New York City. He has fled his over-the-top family in Winters, Texas; he has run through 27 therapists in three years! Shores gives us three pithy scenes of Ty talking to his analyst (actually at us), explaining why he had to leave the South and his family—a familiar and funny story.

Luke’s therapy sessions are charming, and they punctuate the Four Chapters of “Sordid Lives”:  One, “Nicotine Fit”; Two, “Two Wooden Legs”; Three, “The De-Homosexualization of Brother Boy”; and Four, “All Laid Out (in a Mink Stole).” Each scene builds on the Texas family’s fear of their gay sons.

In Chapter One, Sissy Hickey (the inventive, talented Michaela Greeley), Luke’s aunt, flounces around in her wonderfully tacky Texas home, snapping a rubber band to fight cigarette smoking. She is preparing her sister Big Mama’s funeral.

You see, Mama died in a cheap motel when she tripped over the wooden legs of her lover, GW. GW’s wife Noleta (a side-splitting Shannon Kase) comes over to apologize for her husband, but mainly consumes mass quantities of fried chicken and valium.

Sissy wrangles her nieces, La Vonda (a forceful Catherine Luedtke) and LaTrelle (a biting Marie O’Donnell) as they fight about burying Mama in her mink stole with the glass eyes—in the Texas heat. Greeley is a delight to watch as she tries to make peace in an impossible, feuding family.

Chapter Three, my favorite, finds Dr. Eve Bolinger (the brilliant Melissa O’Keefe) in her office, trying to “de-homosexualize” Brother Boy in the loony-bin at Big Spring, TX.  O’Keefe’s career-obsessed pseudo-therapist shakes her boobs at poor Brother Boy. Scott Cox reacts hilariously, as he tries to protect himself from the predatory psychologist—two actors at the top of their game.

In Chapter Four, artful Director Dennis Lickteig, gives us Mama’s startling funeral, where all and sundry assemble to have a say. Brother Boy, fresh out of Big Spring and in full drag, finally takes a stand. It’s a love fest and gay celebration, all round. Honesty finally breaks out, giving us a fine model for fun, acceptance, and love.