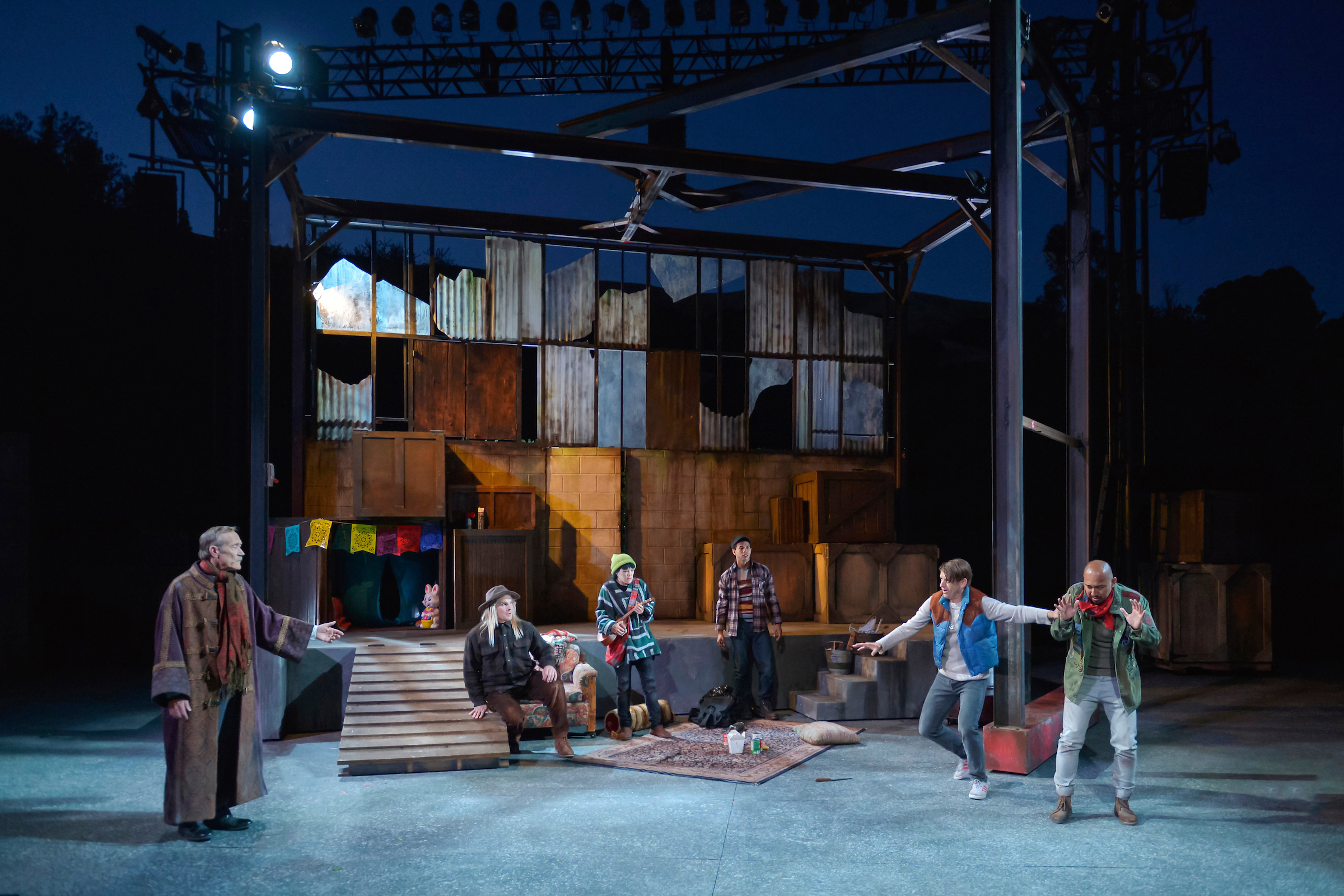 For Shakespeare’s pastoral comedy “As You Like It,” Director Desdemona Chiang has placed the evil Duke’s Court in the green and leafy suburbs; but she has created the Forest of Arden in an abandoned warehouse in Oakland. Nina Ball’s great green vision of hedges in Act One transforms itself into the gritty homeless camp in a flash. Cal Shakes has given us a lot to see and ponder.

Once we leave the pampered, cruel court of Duke Frederick (versatile James Carpenter), we wander with Rosalind (elegant Jessika D. Williams), who is banished to the homeless encampment of Arden, where she disguises herself as a boy. With her cousin Celia (witty Maryssa Wanlass), Rosalind relishes her boy-role as Ganymede. Other members of the cast are cross-gendered, too, and each is seeking both identity and family in the wilds of Oakland. The city holds answers for this rag-tag group of “outsiders,” and not the country.

In this topsy-turvy world, we find a diverse, talented group of artists discovering new family when they exile themselves from the evils and competition of the court. Craig Marker plays a demanding, autocratic, and thin-skinned Oliver, the evil brother, embodying the worst of our time. The seekers represent a rainbow of ages, genders, trans—making a new self-created world away from the demands of success and habits. As a boy, Rosalind convinces her love Orlando to court her and praise her, to “cure” his love-sickness. How do they pull this off?

Well, by invoking the poverty of young folks living together in collaboration, by opposing traditional rules, and dressing in bits and pieces of thrift-store fripperie, Director Chiang creates a blessed Forest of Arden (named after Shakepeare’s Mum, Mary Arden) in the urban camp.  There they “sport it as they did in the Golden Age,” trying to re-create remembered or lost Beauty. They dream of love and utopia from the “lower depths.”

The Bruns Amphitheater offers the most beautiful outdoor setting for The Bard for miles around—there, you are in touch with the trees, the air, the sky—a poet’s retreat in itself. And in Cal Shakes’ “As You Like It,” some text has been compressed and cut, to give us time to contemplate the concept of city, now the symbol for creativity.

Chiang’s idea works, thanks to Nina Ball’s set, the realities around us, and the sharp acting on all sides. Williams’ Rosalind, barely disguised as a boy, endears herself to us, in any get-up. Her clarity, eloquence, and forthrightness carry the day, male or female.

As her boyfriend, Orlando, Russell plays against her with a skittishness and anxiety that make him appealing and affecting. He is the rejected kid who tries to find love and a new self in the sheltering shards of the city. Rosalind holds all the cards, even when disguised as Ganymede, and Orlando wrestles her to the ground. The boy on ‘boy’ action brings down the house.

Add to this extraordinary Arden, Celia’s charming coquetterie, Audrey (wonderful, comical Patty Gallagher) and Silvius (irrepressible, charming William Thomas Hodgson), and you have the makings of a subtle and thoughtful comedy.

Jomar Tagetec makes a deep-thinking Jaques, a show in himself. Warren David Keith a philosophical Touchstone, and Craig Marker does double duty—showing how he can delineate each role—another pleasure to watch.

So many polished performances, here—the words “fall trippingly from the tongue”—that we anticipate a tour de force of modern perspectives on The Bard. The mysteriously muted finale, and the modern music and costumes leave us thinking about the separation between Shakespeare’s imagined world and our own.

And we think about how this comedy bridges the gap between Suburb and City, between races, gender, and mind-bending assumptions about romance. “As You Like It” at Cal Shakes celebrates change and adaptation, wherever it may lead. Join in for seductive song, lavish love, and modern marvels—as you like it.