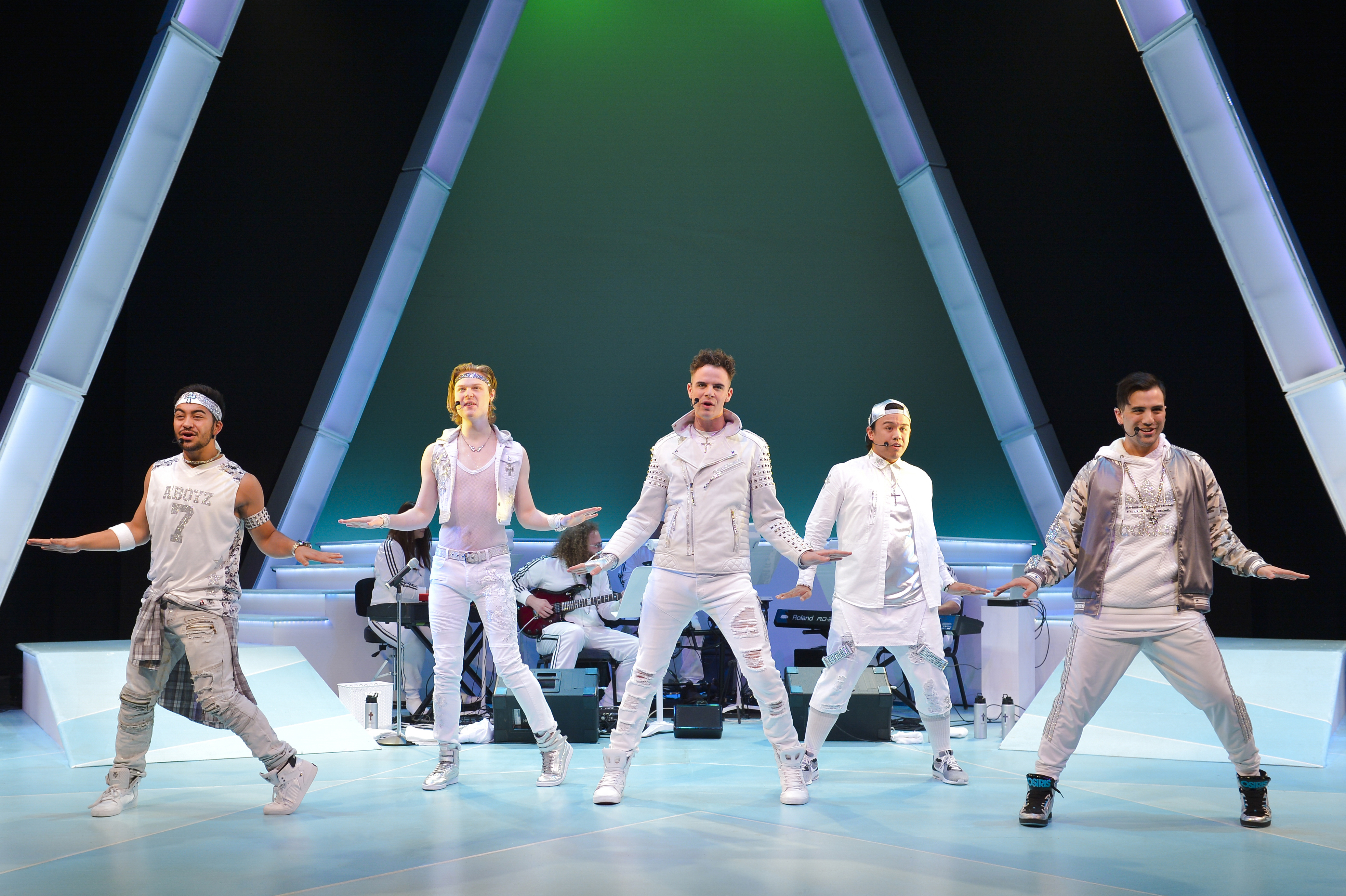 Let me give you the backstory of the 2004 award-winning musical “Altar Boyz”: a Christian boy band is performing its last concert on a national tour. Matt, Mark, Luke, Juan, and Abraham blast onto the stage in true boy band fashion, sporting gleaming white costumes emblazoned with silver sparkles. The Boyz dance tightly choreographed moves, and belt their theme song, proclaiming: “We are the Altar Boyz, and we’ll alter your mind!”

While there are no mind-altering revelations in this whirlwind satirical musical, the fantastic romp will have you giggling in your seat like a Catholic fan-girl tipsy on stolen Communion wine. Once the singer/actors find their rhythm (the first number felt more like a warm-up), they perform like a well-oiled machine. Quickly, each of the five Apostles emerge as full-blown characters.

Named after the Apostle Matthew, Matt (Sean Okuniewicz), a natural leader, has a strong singing voice. He evokes Nick Carter of the “Backstreet Boys” with his perfected cross between a nasal whine and a clear croon.

Another of Jesus’ Apostles, Mark (played by the vibrant Tyce) acts as the band’s cheerleader, and he has a secret ‘crush’ on Matt.  Tyce works his voice like an acrobat, jumping octaves, flipping genres and leaping into vocal embellishments with the spirit of a skydiver. Combined with his talent for physical comedy, he is a riot to watch.

Then there’s Apostle Juan (Josh Ditto), who was abandoned at a church as a baby. He’s a scatterbrained, sweet, ladies man, who makes break dancing look easy. Juan admits his Spanish accent is put on. And he occasionally needs to be steered away from sexual innuendos–directed at the audience.

Finally, the new guy, Abraham (William Hoshida), still Jewish, is embraced by the rest because he writes heavenly lyrics, like “Girl, you make me want to wait. At least until our wedding date. So till then, I’ll master… (long pause here, with Matt on bended knee, staring up at a girl he just dragged onstage)…. My own faith.” This could be the funniest moment of “Altar Boyz.”

For a musical in “real time,” the last concert of their tour, the Boyz are also on a mission—to save every burdened soul in the audience. They tackle the task with the help of a machine called the “Soul Sensor DX-12.” At the beginning of the concert, nearly 300 souls are in need of help. By the end, even after pulling out an emergency song and battling terrifying invisible demons, the Boyz are still “saving souls.”

There are surprises, and these boys find some heavy souls lurking. We see the genesis of the Altar Boyz from the perspective and the past of each quirky Apostle. A bolt of lightning and the voice of God commands the Boyz to write songs that praise Him—but work in the shower or on the road, too.

They must “bind their loins in pleather” and spread His word. After a long buildup, Mark finally seems ready to admit being gay: “I just want to say— I’m—” he gazes out into the audience, shifts his weight, draws a deep breath, and then sternly sings “a Christian!”

The songs are backed by a wonderful live band that doesn’t miss one beat. These folks are in the background on stage, but they deserve a lot of credit. And so do the book writer, lyricist, directors and choreographer. In this particular production, the Boyz easily slide from ballad to pop to rap—even a salsa, varying their choreography to match each genre. The energy is high from start to finish, working up to sweat pouring off the actors in the final numbers.

“They must be exhausted,” a woman in front of me confided in her friend, as we left the theater. No doubt, after such an all-in performance. We come away a little exhausted too, because “Altar Boyz” keeps you from blinking, should you miss an antic, a sweet dance move, or a joke embedded in the lyrics or dialogue.

“Altar Boyz” at Center Rep feels like a 90 minute high-speed train trip, super-charged! “Altar Boyz” provides a night of fun the whole family can enjoy, no matter your spiritual beliefs—so long as you pack your sense of humor.