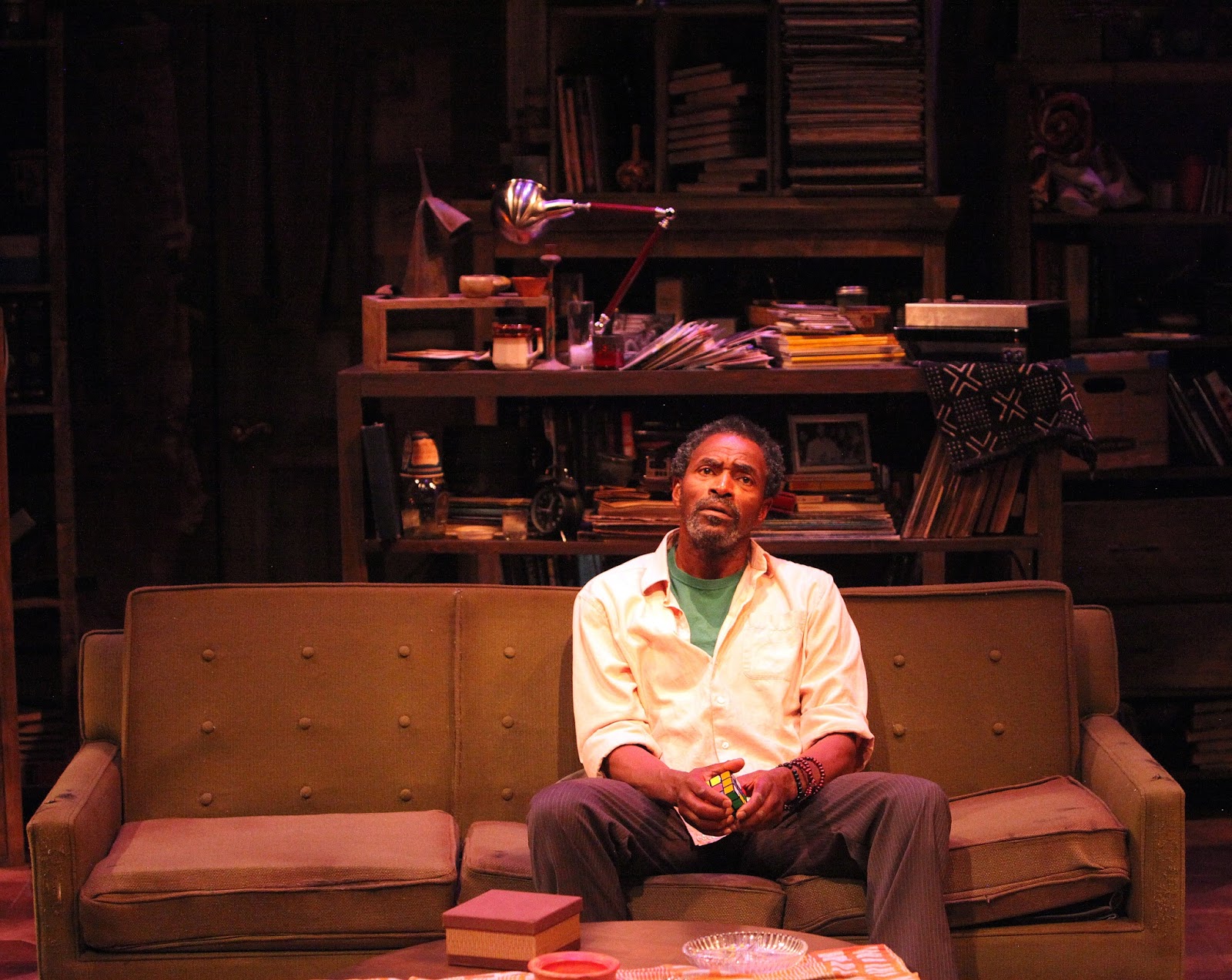 The title of Han Ong’s play “Grandeur” must be ironic, since the setting in a dimly-lit Harlem apartment is anything but grand. Ong has penned an imagined encounter between the pioneering performance poet, Gil Scott-Heron (a superb Carl Lumbly), and a young journalist from The New York Review of Books, Steve Barron (an earnest Rafael Jordan). The play shows us Scott-Heron past his prime, living with a younger woman, Miss Julie (electric Safiya Fredericks), who plays ‘mother hen’ to him.

And this is the man who wrote and performed “The Revolution Will Not Be Televised” in 1970, inspiring later politically-conscious Hip-Hop artists, like Kanye West.

As Gil Scott-Heron, Carl Lumbly subtly portrays a man who used to have a message. Scott-Heron keeps his cluttered apartment in darkness,  like a dragon in a cave—who needs a crack pipe to rekindle his fire. In his book and record-filled living room, Scott-Heron shouts at the inquisitive young journalist. The singer/poet embodies all the resentments of his Black heroes–James Baldwin, Willy Mays, Mohammed Ali. He knows that “everything is a division of People magazine,” a conspiracy to suppress Black culture. He wants to address the murder of black men.

Lumbly gives us the sense that Scott-Heron can control his demons. He looks like an older man waiting for five o’clock to have his first drink of the day. He manipulates Barron, tantalizing the eager young man with stories from his singing and writing career.

Steve Barron parries the attacks of his hero. Rather than being intimidated, Barron goes head to head with Scott-Heron. Director Loretta Greco has tapped into the poetic riffs of the script, slowing and speeding up the pace, rhythmically. Like an old prize-fighter or a child, he needs an opponent.

The singer claims that his crack pipe that will ensure his legacy, as he says,  “Crack will make sure I stick in the mind. …We always go towards the sad ones. They have the lasting power over us.”

Miss Julie lives with Gil and plays his scold and advocate, protecting his waning strength. Julie defends Heron’s legacy, claiming him as another Bob Dylan. With his new and successful album, “I’m New Here,” in 2010, Gil has resurfaced after 16 years of obscurity. She complains that the New York Review waited forty years to interview “The Godfather of Modern Hip-Hop.” Miss Julie is fearsome at times, bearing her resentments proudly.

She is an imposing presence, with her bright dress, and her hair piled up, making her appear even taller. When Miss Julie grabs the precious drug from Barron’s hand, Gil snaps, “She’s going to her room and smoke that rock right up!” No hero here! Barron wants to be a writer like Gil, and Julie is trying, futiley, to get a degree at Columbia University. Ultimately, both are hiding behind Gil Scott-Heron.

As for Heron, we already know he flirts with the devil. The beauty of this play is that there is no Hollywood ending, no redemption song. Despite his despair, Heron is playing a game. Lumbly has captured Ong’s inspiration here, to show a shadow-side of an artist. Lumbly deftly delivers the witty lyrical lines constructed by the novelist/playwright Ong.

Did Gil Scott-Heron get cheated, as Miss Julie claims?  If he were Caucasian, would he be Dylan? Mr. Heron refuses to surrender his dignity. Is he a genius, or a man who has done his thing? Playwright Han Ong is announcing that “The Revolution Will Not Be Televised,” showing again that newspapers and TV shows cannot tell us what to do, only we can take action.