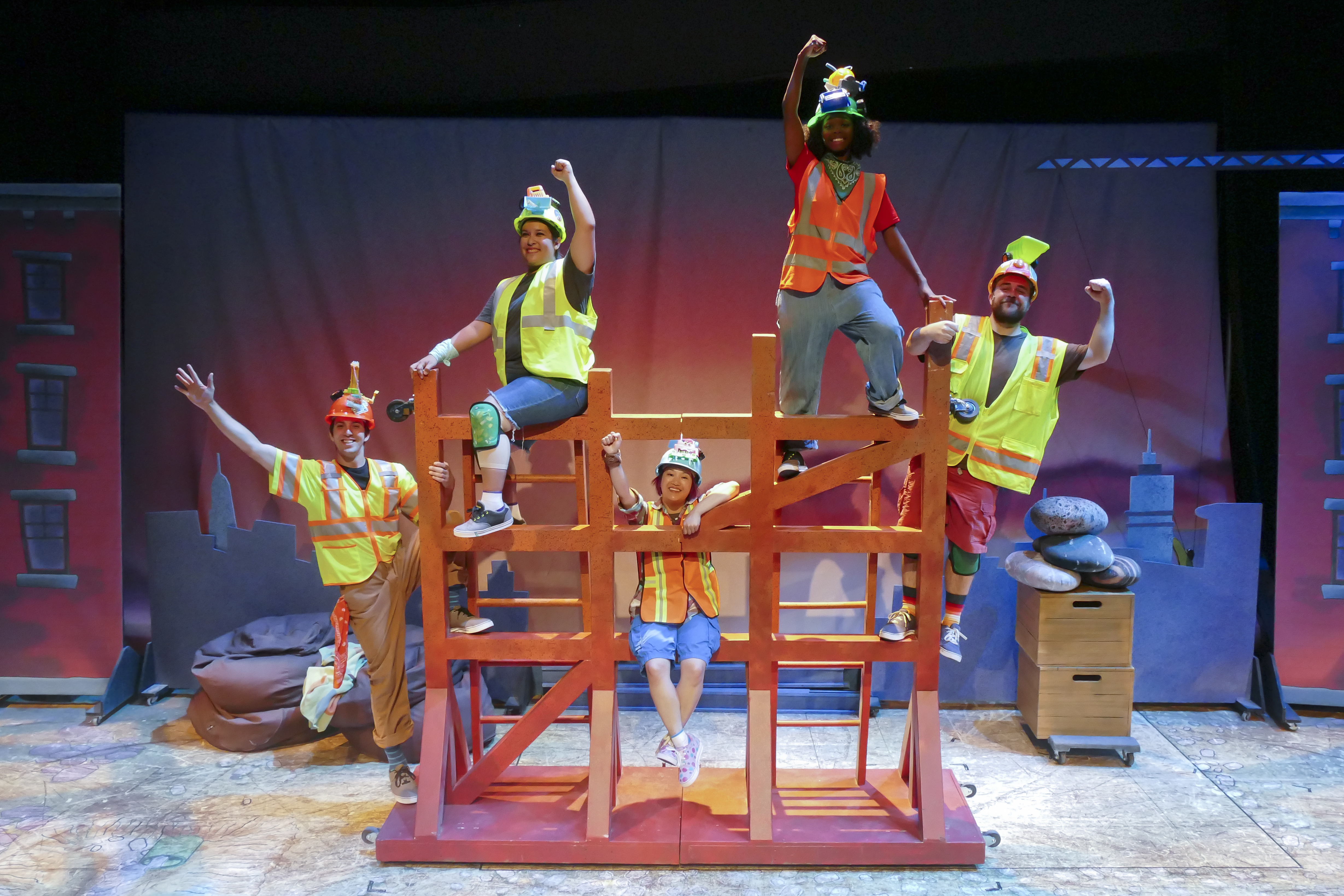 My 18-month-old daughter is obsessed with trucks, especially garbage trucks. She hears them from blocks away, runs to the window, points and shouts “truck!” and then gets quite upset when they roar past. There was no question in my mind she would like the latest musical from Bay Area Children’s Theater, which is hosting “Goodnight, Goodnight, Construction Site” in its new, permanent home in downtown Berkeley.

From the moment the actors zoomed onto the stage—with the help of shoes with wheels in the heels—and started singing about the exciting work they do all day “down in the big construction site,” my daughter was hooked. The bright costumes—orange vests and hard hats with miniature vehicles glued on top—wow the kids.

Combined with creative props, fun choreography, and expertly-woven dialogue, you can hardly peel  your eyes away, especially if you’re a toddler who keeps hearing one of her favorite words. At the imaginary construction site, characters are called Crane Truck, Mixer, Bulldozer, Excavator and Dump Truck. Each has a clear, vibrant personality that increasingly resembles a child or a parent as bedtime draws near. As strange as it sounds, Bulldozer (Jack Sale) is a stern father figure, obsessed with getting work done, while Excavator (Isabel Anne To) is maternal in the way she guides the other trucks toward bath time and a bedtime story.

Cement Mixer (energetic soprano Anne Norland) is a hyperactive, fun-loving character with a wild imagination. Dump Truck (Simon Trumble, with  a flair for physical comedy), portrays a well-meaning young truck with a healthy sense of humor and dramatic anxiety about falling asleep.

Last but not least, Crane Truck (Andrew Mondello) is sensitive and serious. At the end of the day, tired and frustrated and having a conniption fit, the others treat Crane Truck like a volcano  about to blow. An entire song is dedicated to walking a cranky Crane back from the edge of a meltdown. This song brings knowing smiles to the parents’ faces. We’ve all been there, and we recognize the warning signs.

If you’re looking for a plot to “Goodnight, Goodnight Construction Site,” based on books by Sherri Duskey Rinker, you won’t find one. We follow the trucks as they work, as they make mistakes and solve problems, and as they go through a bedtime routine. But the lack of story is not a problem. The music, the characters, the action, and the dialogue are more than enough to keep young audiences engaged in this 45-minute whirlwind show. Austin Zumbro’s writing shines through, expertly guided by director Nina Meehan, and the actors are a very strong team, firing off lines on each other’s heels with ease, like the well-oiled machines they represent. It’s not surprising the musical has won six major Theatre Bay Area Awards, including Outstanding World Premiere Musical.

Kids watch the stage, spellbound, until bubbles pour from the ceiling. Tiny hands shoot up, gasps of amazement fill the room, and parents crane to watch their children’s  delighted faces. When the actors move through the audience, shaking hands and giving high fives during a song about family and love and support, you feel the glow of a charming, ridiculous, and entertaining trip to the theater.

And the trip goes on when the actors take a bow. Instead, they invite you across the hall, where they pass out child-size yellow construction hats, pose for pictures, and set tables with crayons and paper. It’s just another example of Bay Area Children’s Theater going above and beyond.