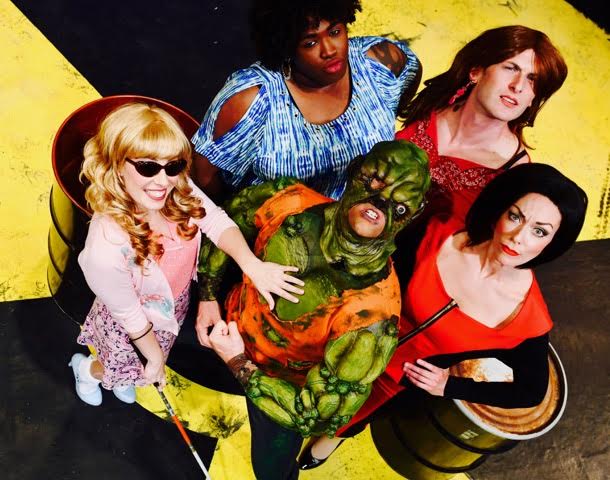 “The Toxic Avenger” musical centers around Melvin Ferd III (Will Springhorn, Jr.) who is thrown into a vat of radioactive nuclear waste, because he stands up to Tromaville’s corrupt Mayor Babs Belgoody (Allison F. Rich). The Mayor wants to make a profit off of the most polluted town in New Jersey.  Remind you of anyone? Melvin emerges from the glowing goo as the super strong Toxic Avenger. He is ready to stop global warming…and his eyeball from falling out of its socket.

Fighting justice with your own hands can be stressful, especially when you have an evil red-suited tyrant leading a lynch mob your way. But our Toxie is not alone. He has a ride-or-die blind librarian girlfriend (Courtney Hatcher) who is quite promiscuous, while acting like an innocent virgin. She asks to feel his face, and grabs a handful of something else by “mistake.”

We relish the ridiculous antics and corny comic book zingers with spurts of laughter. I may have spit out my beer each time the two ensemble members dashed across the stage quick changing their costumes.  White Man (Joshua Marx) and Black Man (Branden Noel Thomas) cross-dress frantically from women in dresses to doctors in lab coats. Later, they transform in front of our eyes from uniformed cops to rock stars in rags.

The songs are a sexy rock funk that has us clapping along, wishing we knew the words. During intermission, you can hear people singing “Bitch/Slut/Liar/Whore,” the “duet” sung by Allison F. Rich, portraying both Mayor Babs and Toxie’s mother—at the same time! Scenic Designer Michael Palumbo uses the intimate stage to spill the set into the audience. The set is a bright green dump oozing radioactive goop, embellished with yellow warning signs. The backdrop is an ever-moving animated projection, telling the story along with the actors. It’s a cross between a live graphic novel and a 90s video game.

Why is there radioactive waste in New Jersey? There isn’t any in Manhattan. The upper class gets the goods and the lower-class gets the slop. Unfortunately, that seems to be the standard in the U.S. Never fear, the brawny hero goes to extremes to level the climate and control pollution. “Toxic Avenger” lightheartedly pokes fun at giant corporations and their puppets while using humor to call on all citizens to fight the power plants that produce endless nuclear radiation. Toxic Avenger takes on all the issues of pollution that threaten our Earth.

Hey, Evil in Red! The Toxic Avenger is coming for you.