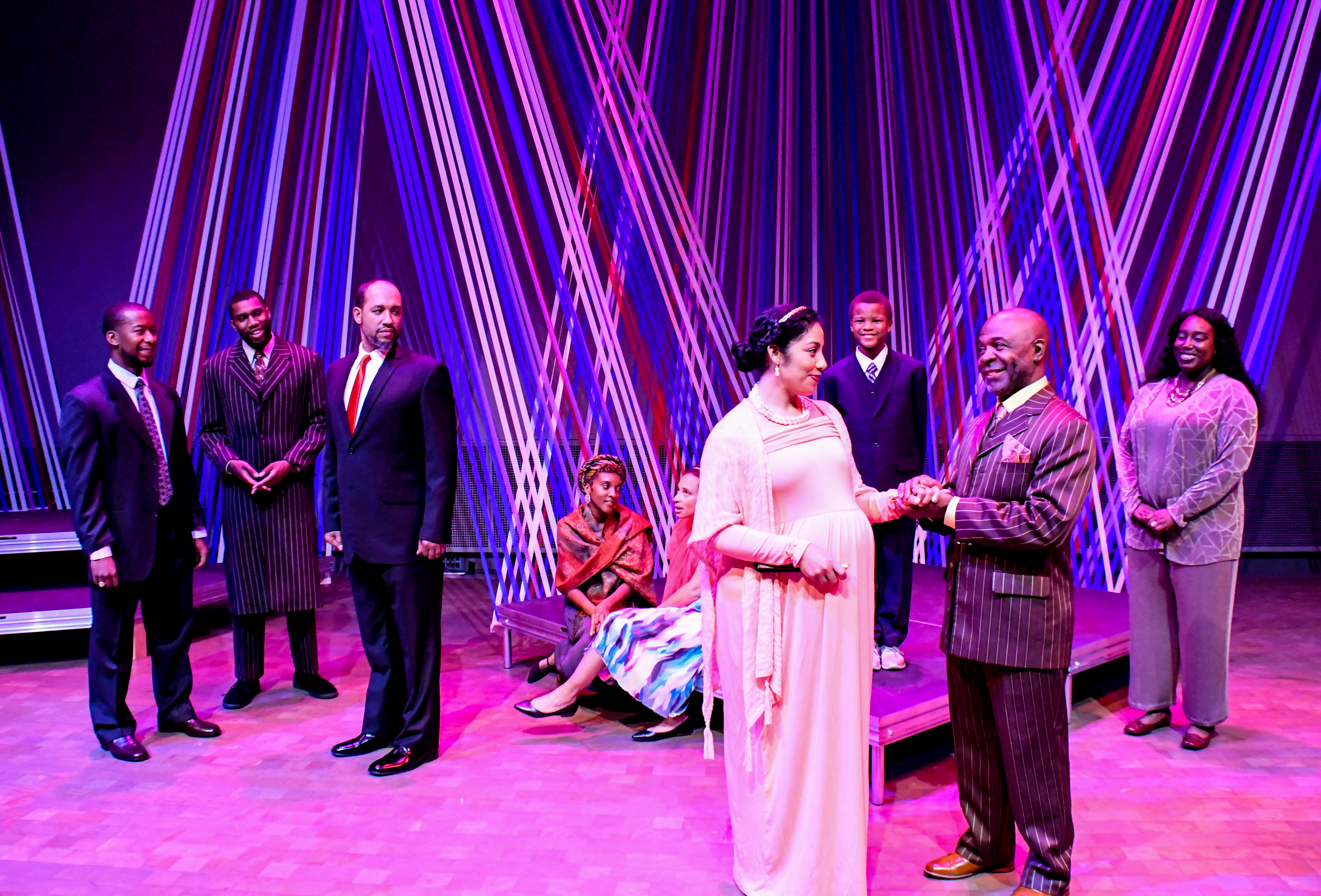 An angry man puts his wife on trial, convinced she is pregnant by his best friend. The man is a king, adultery means treason. His wife forthrightly proclaims her honesty and virtue. The man writhes in his chair as he listens to her, seething, tortured, he embodies restrained fury.

He seems to believe her for a moment, but then his certainty of her betrayal floods back. Eric Reid as Leontes twisting in that chair is splendid in the African-American Shakespeare Company’s modern vision of Shakespeare’s fantasy romance “The Winter’s Tale.”

As the accused Queen Hermione, Regina Morones gives a calm, certain testimony that convinces everyone but her mad husband of her virtue. Morones’ Hermione remains dignified and ardent as she sinks into a hopeless situation. Regal, she will not be cowed, even facing death. Her friend Paulina observes,

Set in modern times, Set Designer Kevin August Landesman gives us a simple but inspired background of long, angled, vertical ribbons (in red, white, and blue) crossing against one another—perfect symbols for the tormented lines of truth opposed by mad resentments.

“The Winter’s Tale” has a tragic opening, following jealous King Leontes’ descent into a madness that shatters his family. He loses his wife and his son. And he abandons his new born daughter to the farthest wilds. Even the divine Delphic Oracle’s pronouncements cannot shake him. His bitter realization of error comes only after destroying all he loves.

Paulina (Brittany Nicole Sims) is he only courtier with the guts to stand up to Leontes in his madness, and she proves to be one tough soul. Paulina fearlessly speaks Truth to Power: Sims makes sure that Paulina’s moral and physical presence cannot be ignored.

Camillo (the smooth, appealing Edward Neville Ewell), advisor to kings, portrays a more familiar sort of courtier.  Camillo is smart and honest, but he is quite willing to engage in deceit to support his interests.

The second part of the play occurs in more bucolic surroundings, represented by a change in lighting from the chilly blue court to green and golden country fields. The falsely maligned friend, King Polixenes, escapes home to Bohemia where he reigns.

Although Polixenes is  innocent of adultery, he also proves also be a bit of a tyrant. He threatens torture and death to the woman his son loves—and her family. ShawnJ West’s Polixenes displays an irrepressible devilish charm, whether dealing with Leontes’ false accusations or screwing up his own family.

As Polixenes’ son Florizel (spirited Jacob Williams) and his beloved Perdita (sweet Jasmine Milan Williams), the young couple dance, embrace, and caper in the beautiful country setting. Florizel and Perdita are utterly convincing as the embodiment of youthful, reckless infatuation.

In this lighter environment we have clowns. Titus VanHook plays the rogue Autolycus as a happy rascal, reveling in his felonies. Wide-eyed Marlo Sue’s shepherd Clown always amuses with never-ending cheerful dimness. But the Old Shepherd (versatile Awele Makeba) wins some wonderful comical moments too. Stumbling on the basket holding the abandoned baby Perdita, the Old Shepherd begins challenging audience members—“Is this yours?  No, is it yours?  Yours then?”

I always look forward to the African-American Shakespeare Company’s sound effects, from the pre-show background music to the play’s melodies and songs. Here we have bits of Michael Jackson, Looney Tunes, Monty Python, and more—but trust me, it works.

“The Winter’s Tale” is an odd bird, opening with great tragedy, but ending in redemption and happy marriages. Some characters thought lost are recovered, but Leontes’ first born son, Mamillius, is lost forever. Director L. Peter Callender has Mamillius ever-present. Alive, he watches as his family disintegrates. After death, as a ghost, he remains—observing, supporting, and trying to restore his family.

“The Winter’s Tale” is story of repentance and forgiveness, even renewal. But I cannot not help but think that politically, it comes off as timely. If only every nation had a Delphic Oracle to correct the lies, rumors, and alternate truths of misguided leaders.

The African-American Shakespeare Company is always interesting. Come see this production and support a most worthy San Francisco arts organization.

“The Winter’s Tale” by William Shakespeare, directed by L. Peter Callender, by the African- American Shakespeare Company, at the Taube Atrium Theater in San Francisco, through Sunday, June 18.  Info:  african-americanshakes.org