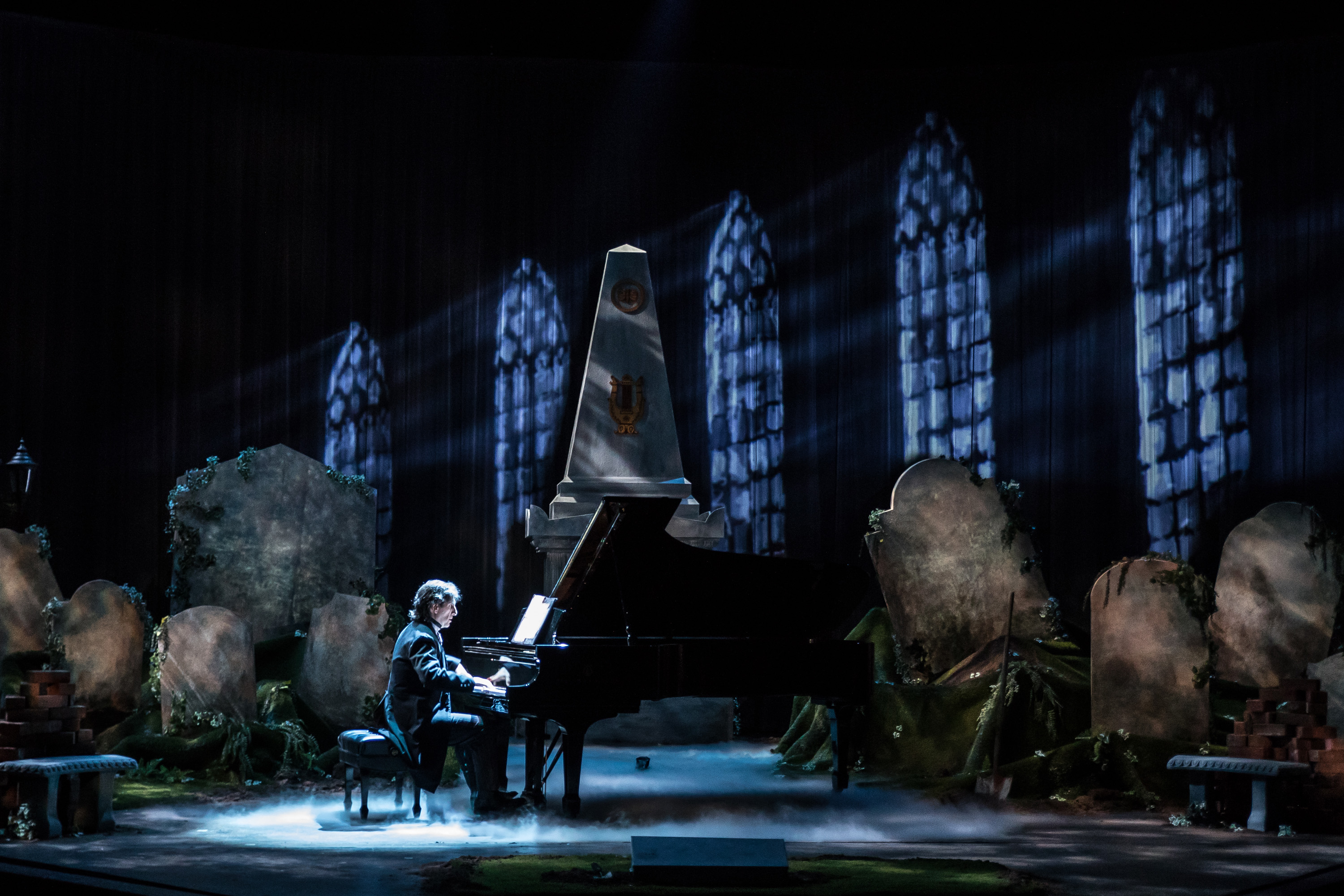 The time has come to acknowledge that Hershey Felder has created an art form with his one-man shows where he becomes Chopin or Bernstein or Beethoven, while he plays and tells their life stories at the grand piano, center stage. Currently, at TheatreWorks, Felder, dressed as the composer in a long black period coat, makes you feel like you are speaking with The Master, himself.

Felder plays the Master’s immortal music magnificently on the piano, and also tells the story of B’s life at the same time. He takes on several other characters as well, giving us a stirring play written by Felder, himself.  He even does the set designs!

In fact, Hershey Felder—gifted writer, concert pianist, and superb storyteller—creates a portrait of Beethoven, you can find only on the stage. We see the young Beethoven, abused by his cruel father, rejected by friends, but going on to amaze audiences with ideas that revolutionize music. We see him taking a few simple notes and making them into unique pieces, even as a child. We feel like we are there at the dawn of Beethoven’s genius.

When you are doing Beethoven, his few loyal friends, and his unruly family, you better have done your homework—and Felder has honed his art of portraiture and piano genius for many years. He conducts us slowly through the painful years of Beethoven’s childhood and his apprenticeship with Mozart—with refrains from the “Pathetique” and Mozart’s “Requiem.” We leave TheatreWorks with a greater understanding of Beethoven’s music—and how he parlayed three or four notes into themes for his prodigious symphonies.

I have thrilled to Felder’s other works: his “Monsieur Chopin,” his “Maestro Bernstein,” and his “Children of Willesden Lane.” Now, he plays Ludwig von Beethoven, with great restraint and power, with excerpts from “Moonlight Sonata,” the Symphonies, Sonatas, and a bit of his master Mozart’s “Requiem” mass.

The enraptured audience at TheatreWorks in Mountain View’s Performing Arts Center is breathless and quiet, our attentions are riveted  on Felder who also plays Beethoven’s friend,Dr. Gerhard von Breuning, who was only six when he met the composer. Breuning’s father took pity on their neighbor, the isolated and tempestuous Beethoven, and invited him over for dinner. The composer was alone, and constantly at war with his own difficult family—an abusive father, a hostile brother, and an ungrateful nephew. Few people got as close to the composer as did this boy, who tries to help the infirm and increasingly deaf Beethoven.

But here, amidst shadowy tombstones and elegant 18th Century furnishings, bookshelves, and a sprinkling of stars—Hershey Felder brings us the love that Dr. Breuning feels for his older friend.  The good doctor looks at the surviving bones from the inner ear of the composer, after his death, and wonders if we will ever understand the mystery of B’s deafness, and the misery that afflicted him.

We are swept up in the composer’s attempts to do the right thing—always rebuffed and misunderstood by his mean-spirited family. Felder’s script brings to life the axiom: “No good deed goes unpunished.” B was hard to get along with because he is pursued by demons and cannot express himself to others, including his family and his adoring fans.

We feel sympathy for the composer as folks desert or attack him—and we wonder whom we may be shunning because we refuse to understand them. Felder’s docu-drama with Beethoven’s exquisitely performed works mingle heights of empathy and musicianship that mere mortals rarely achieve. Felder makes us feel at home with genius.

Hershey Felder as Ludwig von Beethoven, and his friends makes believers and admirers of anyone lucky enough to hear him act and play at TheatreWorks.  All I can say: Be There for Beethoven and Felder: The Greatest! Cast: Hershey Felder as Beethoven and others.