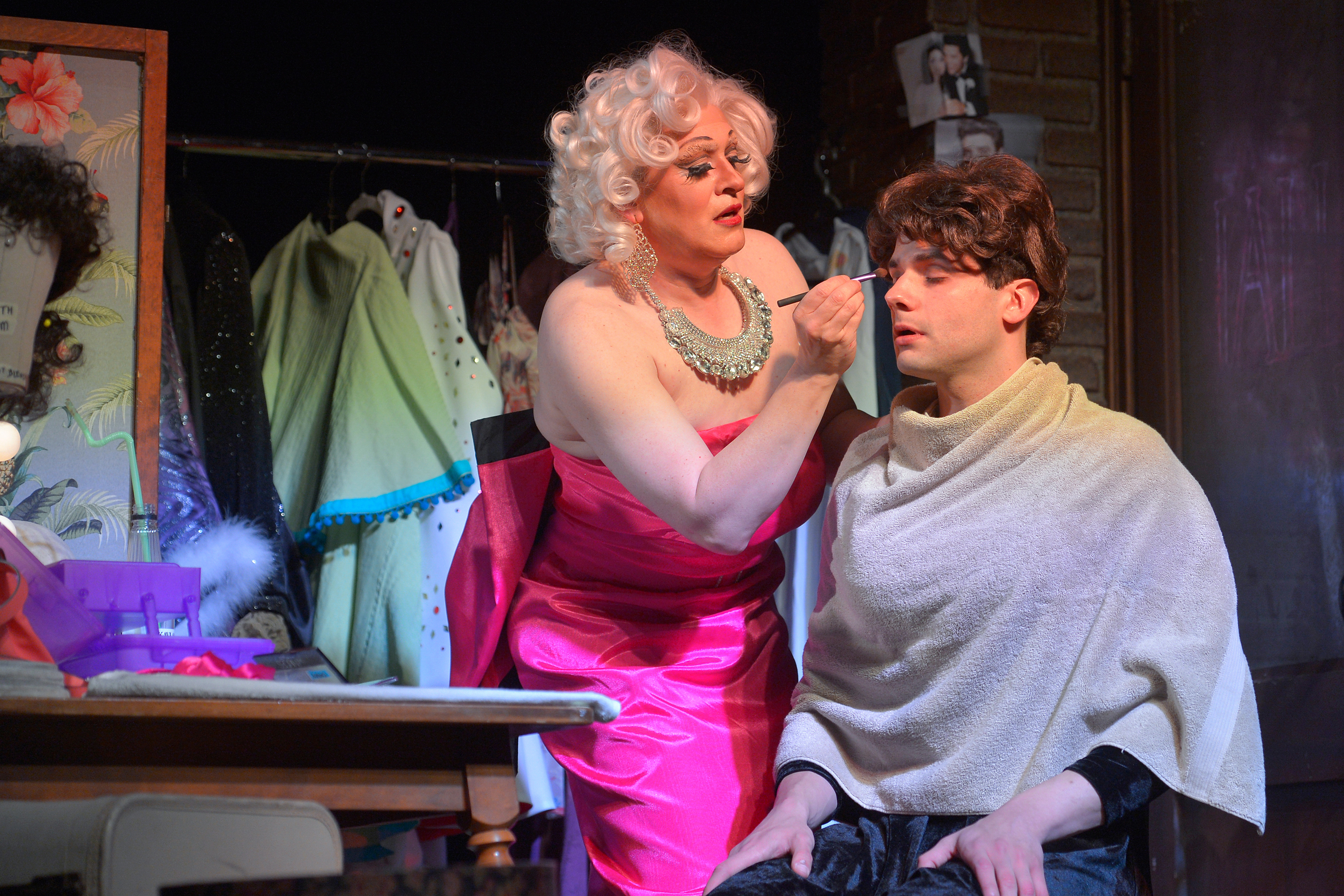 You know how hard it is to make a living these days as an Elvis impersonator, right? Even if you work in a small dive bar in Panama City, Florida. That’s what Casey (amped up Adam Magill) finds out, at the same time his wife Jo (fetching Tatiana Wechsler) reveals that she’s pregnant.  When Casey loses his job at Leo’s Bar, he is forced to dress up as Edith Piaf and lip-syc just to make ends meet.

When you really love being an Elvis impersonator, and you have just bought a white silk suit with red flaring slit-linings, it’s hard to change to drag. Clueless Casey is flying blind when it comes to show business or fatherhood.  He cannot even pay the rent on their tiny apartment, while his wife works at the corner market. They are the cutest young couple, but he’s as innocent as a babe in the woods. Country bumpkin Casey is tall, lean, supple, and romantic. He just manages to keep his wife out of the loop about taking on the drag job at the bar.

“The Legend of Georgia McBride” by Matthew Lopez, currently at Marin Theatre Company, goes for broke in every department: fabulous drag costumes, great wild staging, and delightful lip-syncing as Casey learns how to impersonate a Diva.

Thanks to Miss Tracy Mills (wise-cracking, loveable Kraig Swartz), Casey is forced into Drag. The powerful Miss Mills makes him put on panty-hose, and mouth “watermelon-motherfucker” to cover for his ignorance of the words to Piaf’s song. Every twist and turn of his straight boy indoctrination into make-up, hair-do, and other drag mysteries brings him closer to his true performing self. Elvis bites the dust—for a while.

The truly spectacular parts of this coming-into-drag story are the sparkling, sizzling numbers on the stage of the Leo Club, under the watchful eye of house manager Eddie (a pitch-perfect John R. Lewis). We watch Casey becoming unafraid to be a Drag Queen and open himself to change.  And we see Tracy Mills and her sometime protégé Miss Anorexia Nervosa (a joyful, fab Jason Kapoor) imposing their city ways on their country cousins.

Because Rexy is usually spaced out on booze and pills, Casey has to take over as Drag Queen of the hour—and a Star is Born! Casey’s wide-eyed naivete is delightful as he deliciously tries to squeeze his lanky frame into womanly gear, topped by a bewitching wig. He makes an awkward and hilarious woman, at first—and we relish his discomfort and his growing love for drag as a calling and an art form.

The three Queens, Casey, Tracy, and Rexy, do outrageous numbers in brilliant costumes, exploring the primary color palette, as they burst onto stage in bright yellow rain-gear, cut up to the thigh. Costumer Kara Harmon makes them three naughty girls with transparent umbrellas who sing “It’s Raining Men.” They belt out “Express Yourself,” with wild abandon.

Their make-up, their hair, their costumes are worth the price of admission. Each guy has a different degree of expertise with Drag, making their imitations of the great Ladies so much fun to watch. In their star turns, they cover all the Divas: Judy, Edith, Aretha, Diana, Amy, Madonna, Marilyn, you name ‘em—they bring down the house!

Finally, the play is a comic inquiry into the meaning of cross-dressing, queer-identity, and queer/straight drag in the U.S. Tracy tells us it’s a serious way of life that only the Queens can understand. It’s a not-so-secret society that takes a lot of work to join. Drag destroys standard ideas about masculinity, and hyper-idealizes womanly beauty. After all, the Drag Queens were the ones who revolted at the Stonewall Bar in New York, to kick-start Gay Liberation.

What’s a straight Elvis impersonator to do—why, I guess he has to shed his inhibitions, explain to his wife why he’s become a legendary drag queen, and change the face of the U.S. from Elvis to his own deep-seated artistry. He’s not gay, maybe he’s a bit queer, who knows—but for playwright Matthew Lopez, Casey’s gender flexibility holds hope for our future.

Perhaps we all have to embrace our opposite selves to understand ourselves?  “The Legend of Georgia McBride” demonstrates these mysteries, on stage, in drag, with lipstick, short skirts, and lots of Fabulous Fun.