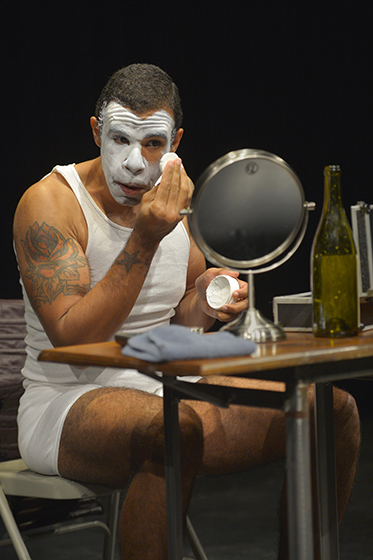 There’s a masterpiece stalking the streets of Berkeley, and it’s called “An Octoroon” by Branden Jacobs-Jenkins. Jenkins won the Best Off-Broadway Play Award (The Obie) with this play three years ago. Last year he won the MacArthur “Genius” award for playwriting. Mr. Jenkins is a force in contemporary U.S. theater, and Director Eric Ting has staged this powerful satire with flash and dash for Berkeley Repertory Theatre. This is a HOT ticket, friends.

“An Octoroon” is studded with spectacular set designs, witty costumes, and precise sound that includes bursts of rap music and the calming rush of crickets. Ting’s rendition of “An Octoroon” will leave you breathless, deconstructing race in America for yourself, and rethinking how an artist operates.

Centuries of conflict converge in “An Octoroon,” as the modern playwright, called BJJ, converses—first with us, and then with Dion Boucicault, the writer of “The Octoroon,” a wildly popular play of 1859.  BJJ (talented, inventive Lance Gardner) tells us about Boucicault’s play, invokes booming rap music, and plays two more roles in his own play. The startling staging—from cotton balls that fall from the sky, to the piano-playing Br’er Rabbit (Lisa Quoresimo), to the actor’s Assistant (Amir Talai) who performs in blackface—everything will enthrall you.

If that’s not enough, BJJ becomes an evil slave master called M’Closky, as well as an idealized, “benevolent” southern slave-owner called George. Gardner masters all three roles, playing M’Closky and George in whiteface. He literally wrestles with himself, as hero versus villain. Gardner vaults to the top tier of S.F. actors with his multi-dimensional, engaging work in BJJ’s play. He brings wit, stagecraft, and presence to all three roles.

The play begins by taking us into BJJ’s private life, where the playwright questions why everything he writes is treated by others as a deconstruction of race in the U.S. Dressed in his underwear, BJJ acts out a supposed conversation with his shrink. BJJ decides to directly address race in America by adapting Boucicault’s exaggerated Civil War era melodrama. Or—does he really have a shrink? Can he afford one?

As George, inside of the Civil War melodrama, he falls in love with Zoe (the charming Sydney Morton), who finds just the right touch of innocence and irony for the beauty of the Octoroon. Zoe is the perfect woman. But her supposed one-eighth African American heritage disqualifies her from marrying George under southern law. To heighten the comedy, Dora (hilarious Jennifer Regan) pursues George, playing a silly southern belle. These antiquated and explicitly racist categories are blown apart by plot and players, past and present. Racial categories and colors are dissed with wild abandon.

With the brilliant Ray Porter as Playwright Dion Boucicault returned from the dead, Berkeley Rep bodies forth the complexities of Jacobs-Jenkins’ fiery adaptation of “The Octoroon,” retitled “An Octoroon.” When Porter puts on “Redface” to imitate Wahnotee, a Native American accused of murder, we get into black-white-red in risky, revealing stage business.

The twists and layers of the play surface when the modern playwright finds it impossible to locate a white actor to play the white slave master. The white casting problem leads BJJ to play the evil M’Closky, as well as the love-struck George. To pull off this feat of villain and hero played by himself, he slathers on a heavy dose of whiteface, a wig, and a twirling moustache. Gardner works wonders with that stache.

Branden Jacobs-Jenkins has melded our past with our present. In the conversations between slaves, he highlights the humanity of African Americans. We get to share hilarious talk between house and field slaves, told in a lingo that leaps from old jargon to modern street talk.

Minnie (sprightly Afi Bijou) refuses to take orders; while her friend Dido (commanding Jasmine Bracey) points out the dangers of freedom. When presented with the idea of escape, Dido comments: “What you gonna do once you free? You just gonna walk up in somebody house and be like, ‘Hey. I’m a slave. Help me?’” Dido’s real-life warnings contrast vitally with the sentiments of Zoe and George, who live in the past.

Playwright Jacobs-Jenkins sets the 1859 play in an updated present. His new play flows back and forth in time, so that writing and acting styles form a center of attention. The question of how to make us feel what slavery was like culminates with a shocking display of an horrific photograph. In the minutes the photograph hangs, we are taken out of the old melodrama and the new satire. We are forced to connect with the real crimes against African Americans. Shocking, stirring, sensational! A Must See.