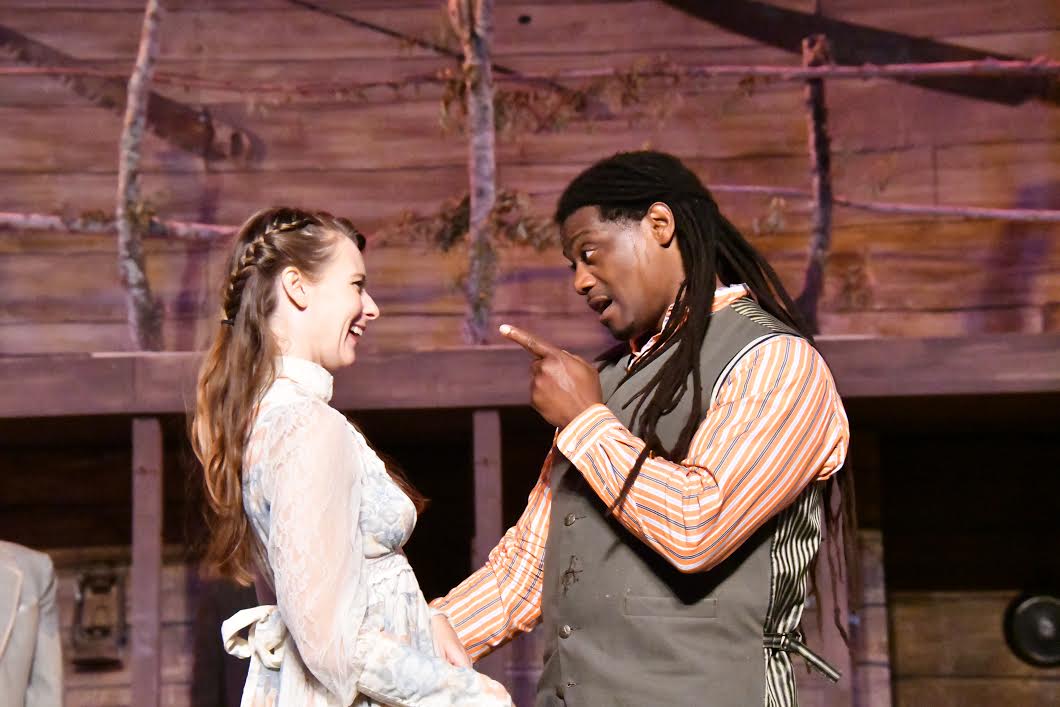 A moonshine swillin’, cigar smokin’, spittoon hawkin’ bachelorette as a member of a feuding clan in Appalachia?  This is Beatrice?  This is Shakespeare?  While Marin Shakes is among the most conservative of the 10 or so “Shakespeare theater companies” in the Bay Area (yes, you read that correctly—10 or so), they’ve broken the mold with a hilarious hillbilly version of “Much Ado About Nothing,” replete with backwoods patois and bluegrass music.  As incongruous as it seems, it works like a charm.

The play is originally set in Messina, Sicily.  Except for retaining the Italian character names, director Robert Currier’s delightful “Much Ado” is transported to the bare clapboard, hardscrabble world of the Hatfields and McCoys—the border lands of Kentucky and West Virginia. The set is crude, the costumes are peasant-style, and the language an admixture of Shakespearean eloquence with down home Southern earthiness.

For readers concerned with spoilers, don’t read on.  But let it be said that for most theater goers, surprise is not an important element in appreciating a Shakespeare play—and certainly not one seen for the umpty-umpth time.  “Much Ado” is one of the brightest comedies in the canon, but structurally, it is odd.  The central plot sequence concerns the coming wedding of Claudio and Hero; the false accusation of Hero’s infidelity at the altar; her pretended death; her exoneration; and the shotgun wedding in which Claudio thinks he is marrying her cousin, but it is actually Hero.

Despite the complex plot machinations about Claudio and Hero, who are the dominant characters?  Why, they are Benedick and Beatrice—in whom Shakespeare has favored the most witty, humorous, contentious repartee imaginable between declared enemies who are doomed to marry.  Or, as anticipated by Leonato: “If they were but a week married, they would talk themselves mad.”  Hurling epithets and insults with glee, they even bicker their long-delayed declaration of love in a shouting match.

The cast chews up the scenery with great enthusiasm.  Elena Wright as Beatrice carries herself with great aplomb as she sachets about and rips off sassy, condescending digs.  She also pulls off some physical comedy involving tumbling and getting whacked in the face by a rake handle.  Benedick equals her challenge in the “merry war.”  In that role, Dameion Brown also commands the stage and even eggs the audience on a bit to induce more laughter.  Joshua Hollister and Nicole Apostol Bruno bring brightness and earnestness to their roles as the other lovers.  In a smaller part that some other actors fail to endow with enough energy, Clay David’s evil John is a hissing, growling menace, well played.

A special element that is particularly fitting with this production is Billie Cox’s original music—comprised of several solo and ensemble vocals accompanied by a bluegrass instrumental quartet.  Although the songs create breaks in the action, they do enhance situations and characterizations, as with John’s “Am I bad … Am I nasty?” and Claudio’s “I am a soldier.”  Joshua Hollister deserves particular recognition for his beautiful voice and technique, though at times the volume was inadequate despite his operatic training.  And though Benedick’s brief singing was supposed to be bad, it was beyond the necessary.

“Much Ado” resonates for its clever dialogue and its overall good nature.   Rich with themes and morality consistent with its time, it exhibits matters of grace, honor, and deception.  In Beatrice, Shakespeare has crafted one of his strongest women, yet one who reveals complexity, with tenderness and vulnerability.

One dissonance modern audiences may find surrounds Hero’s purported infidelity and subsequent marriage.  She is quickly dismissed and abused by the men in her life with total disregard for her word or her integrity.  And then she agrees to marry Claudio with the deceit of presuming to be her cousin, but without his demonstrating contrition to her.  Well, gender relationships were little different 600 years ago, and we have to cut the Bard some slack on that one.  It’s an important work, and this is a highly entertaining production.

Incidentally, the sub-head grabber that opens this review refers to the fact that the titles of Shakespeare’s histories and tragedies are strongly grounded to the story by the central character’s name(s), whereas, in the minds of many modern observers, the titles of several comedies do not connect so clearly to their respective plots.