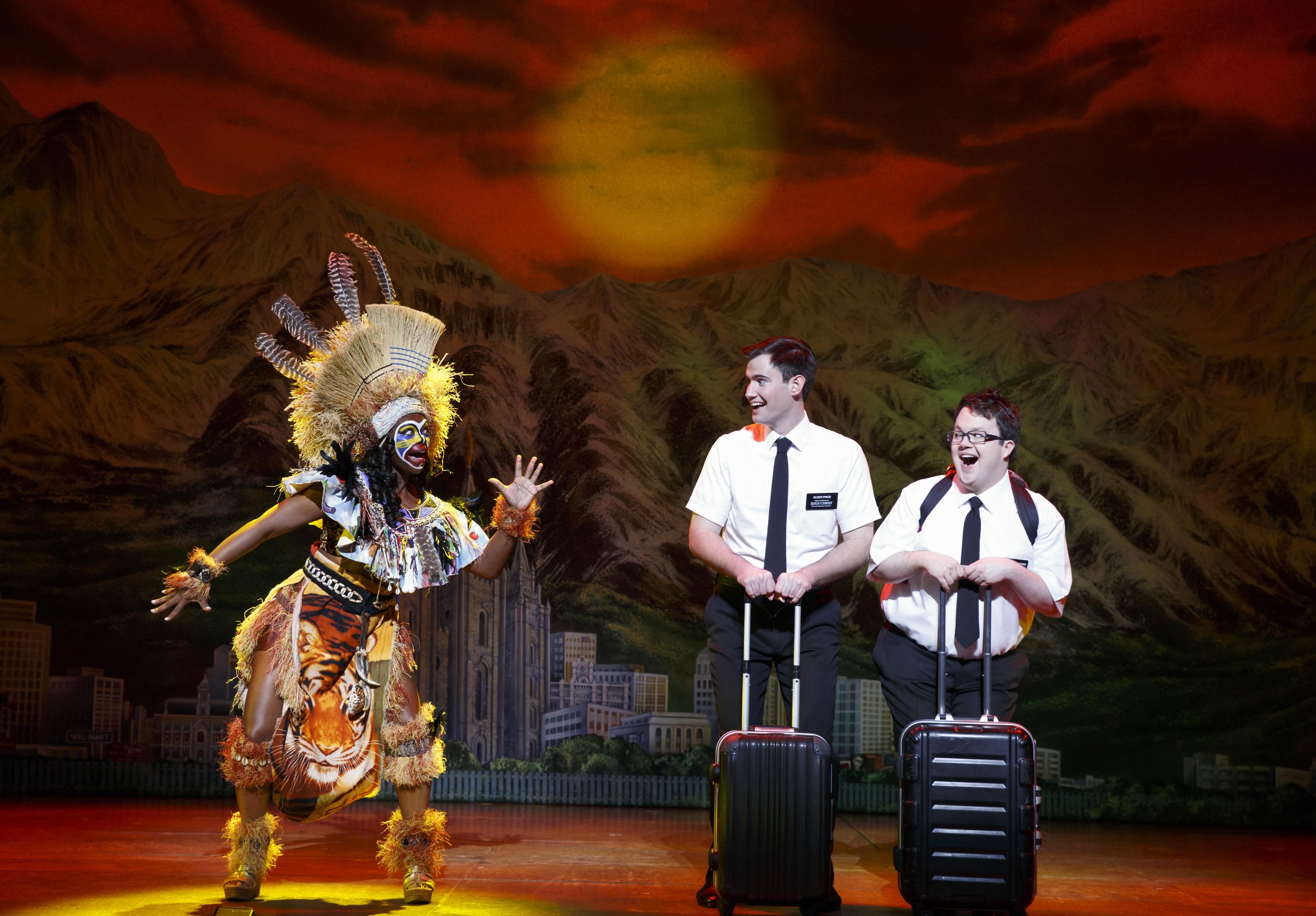 “The Book of Mormon” opens with the hit song “Hello,” in which one young man rings a doorbell, enthusiastically introduces himself, and offers a free copy of “the most amazing book.” Before long there is a cacophony of doorbells and the stage is full of beaming young men going door to door, reciting a cheery script, until Elder Cunningham (the fantastically funny Conner Peirson) ruins the groove, taking liberties with the approved selling points.

The short, stocky Cunningham, in thick glasses, clearly does not fit in with his peers at the Mormon Training Center. He’s a sci-fi nerd, a cloying tag-along, and a pathological liar. We squirm with Elder Price (stellar Gabe Gibbs, direct from Broadway), when he is paired with Cunningham for the next two years, in Uganda of all places. (Price was hoping for Orlando.)

Two by two, the missionaries set off across the globe to spread their most glorious of religions— Mormonism. When the ill-matched Price and Cunningham reach Uganda, we are greeted with an amazing set change from airport to dusty African village. The town spreads out before us, complete with thatch roofed huts, half buried bones, a cast of colorful characters—and the dismally out of place Mormon missionary office.

The situation seems dire until the villagers share a saying meant to lift the boys’ spirits. When someone catches AIDS or gets murdered or has their clitoris cut off by marauding warlords, the villagers throw up their hands and declare: “Hasa Diga Eebowai.” It’s all well and good until the boys ask what it means. Turns out the translation is “fuck you, God!”

Perhaps that’s why the Mormons have yet to win a single convert. The task seems impossible until, after a fight with Price, Cunningham gives in to his urge to lie when the Africans ask what the hell the Book of Mormon has to do with them.  His answers result in absolute hilarity.

Interspersed with the current story line are animated wacky “biblical” scenes, showing how the Mormon faith came to be. These scenes are narrated by writers Matt Stone and Trey Parker. The South Park creators teamed up with Tony Award-winner and “Avenue Q” co-creator Robert Lopez to make this show, when they realized that they were all itching to do a musical centered on Mormons. While this production pokes a whole lot of fun at religion, the Mormon faith is never demonized. In fact, like Cunningham, religion comes out an unlikely hero.

Mormonism leads these villagers back to a sense of hope and self-worth. Granted, the villagers end up spreading a profoundly warped version of Mormonism, but no one loses faith in this play. They regain it, even if they need a trip to “Creepy Mormon Hell” to come around.

The Mormon church itself has a sense of humor about the show. They have taken out an ad in the playbill featuring a picture of the Mormon Bible and the words: “Our version is sliiiightly different.”

This production is flawless, living up to all the hype and beyond.  Every note is pitch perfect, every scene a masterpiece, each character expertly portrayed by the fabulous cast and ensemble. This is truly a must-see show, well-deserving its nine Tony Awards. For those squeamish about the show’s crude reputation and all that cursing, take heart. My mother, who is normally pretty uptight about these things, was hooting just as loud as everyone else, and she was quick to jump to her feet as the actors took their bows.

“The Book of Mormon” by Trey Parker, Robert Lopez, and Matt Stone, directed by Casey Nicholaw and Trey Parker, by Broadway San Jose, at San Jose  Center for the Performing Arts, through Sunday, July 23, 2017. Info: broadwaysanjose.com