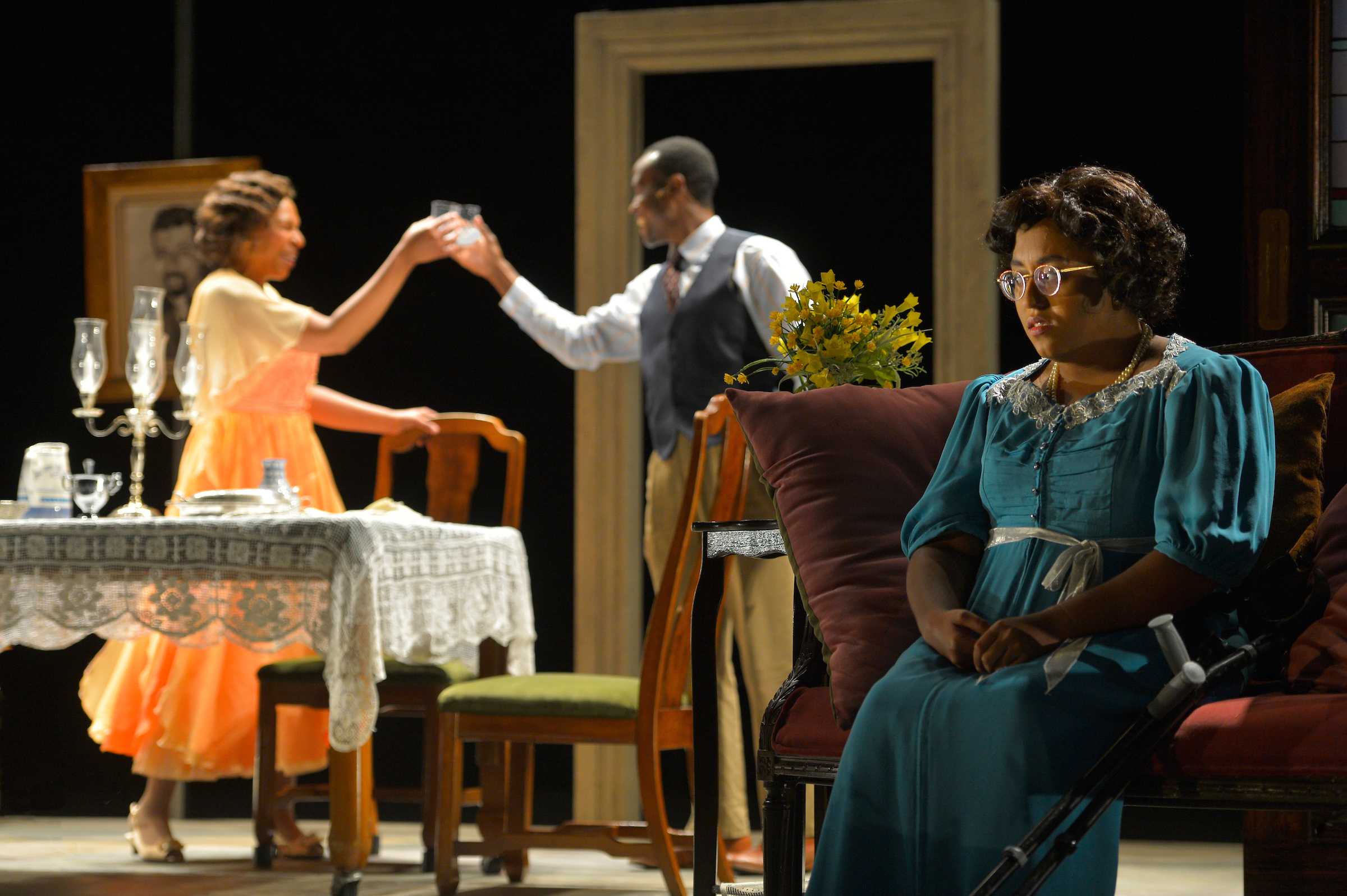 “The Glass Menagerie” opens with Tom Wingfield’s short, poetic monologue, explaining that he is both the narrator and a character in the play. We are entering his memory of a particular time of strife in his family.

At Cal Shakes, Tom (the fabulous, convincing Sean San Jose) delivers his monologue as the sun illuminates the East Bay hilltops behind him. His mother and sister sit still as statues on either side of the stage. Immediately, it is clear that Director Lisa Portes’ version of “The Glass Menagerie” has inverted a main component of Tennessee Williams’ most autobiographical play. This family is not white. This family represents a diverse America. And as soon as the action starts, we realize that Portes has also cast a disabled woman to play Laura. Phoebe Fico relies on crutches to move about the stage, lending a deep authenticity to her role.

From the moment their mother, Amanda (the riveting Karen Aldridge), calls Tom to the table and launches her diatribe about how he should eat his dinner, it’s clear that mother and son have perfected a specific repertoire. It’s a strained, loving relationship of disappointment and longing that unfolds beautifully due to the strength of these actors.

Aldridge is stellar as Amanda, with a voice that conveys the most complicated of emotions and a spirit that has the audience laughing out loud throughout the play. She rushes about the stage like the fading debutante she is, and uses every part of her body to inhabit this character, which Cal Shakes says is based on an upper-class black woman in the early 1900s.

In an article included in the program, the creative team explains that there was a tiny group of wealthy, upper class African Americans living in the south who held the same type of debutante-style balls that celebrated wealthy white girls’ coming of age. This explanation is unneeded, by the way. The original lines delivered by Amanda highlight American history, and the history of this play, set in the 30s, in an intriguing and thought-provoking way.

As Tom, San Jose guides us through the play with an earnest, raw, emotional performance. We watch him tenderly tending to his sister Laura, obediently fetching everything his mother wants—even a gentleman caller for Laura.  Tom often leaves the stage to appeal directly to the audience. At times he battles to hold the very set together—thrusting a coat stand onstage just as Amanda takes off her jacket, and stumbling to provide another dinner chair before the meal begins.

But just as Laura is devoted to her fragile collection of glass animals, there is a brittle aspect to this production. While Fico provides a rare physical authenticity to her character, her acting is inexperienced. However, there is a scene in which she shines. After Amanda sends high school crush Jim (talented Rafael Jordan) into the living room to check on her, Laura and Jim deliver a touching exchange that illuminates the heart of this play, both literally and figuratively.

Director Lisa Portes says one of the things she admires most about this play is that all of the characters are messy dreamers who fail to fit into the clean American Dream. It is a pleasure to see these dreamers collide, to briefly align, and to cleave apart, again, on the Cal Shakes stage.