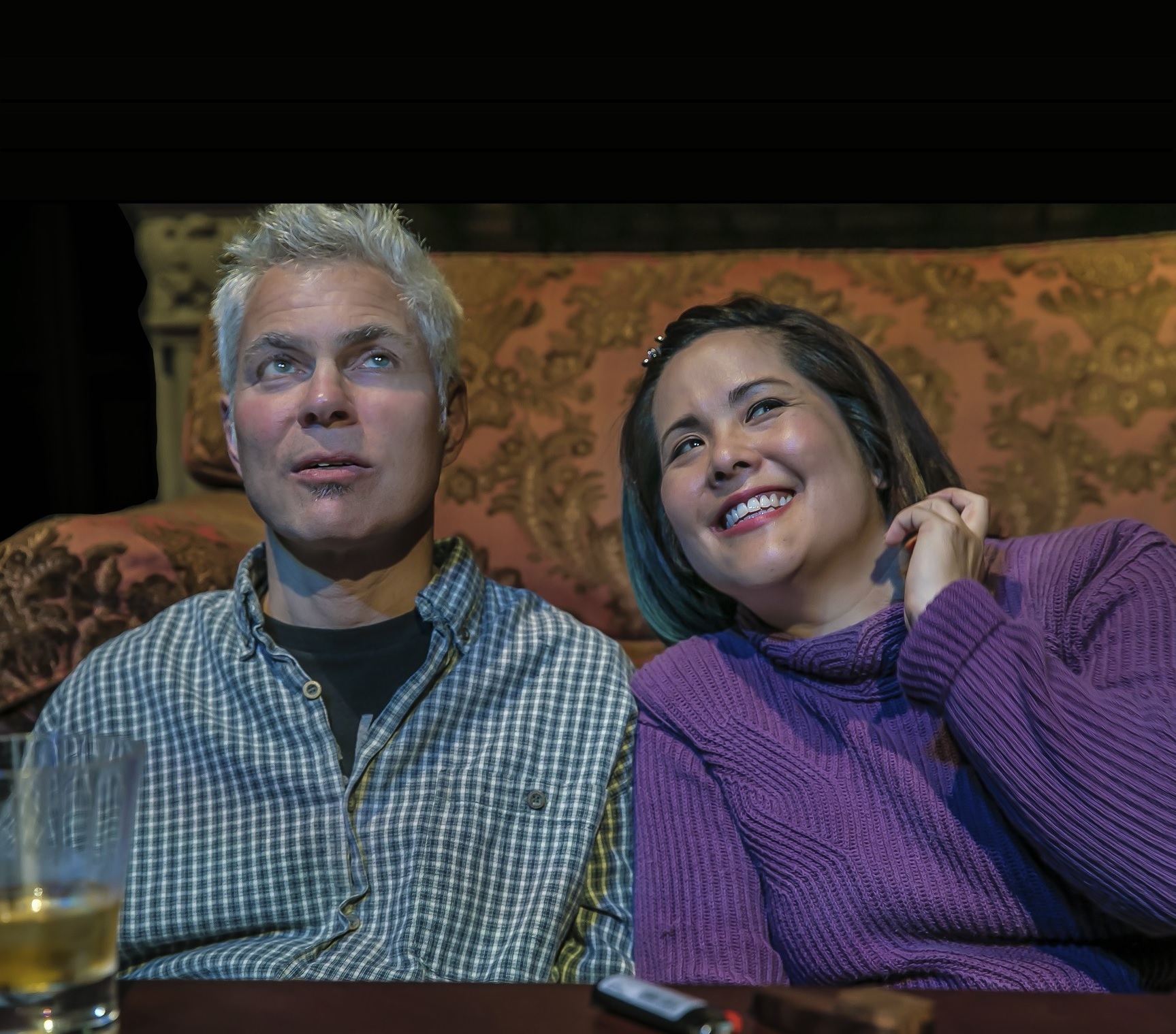 “The only philosophical question worth considering is suicide” –Albert Camus

“Winter” by Julie Jenson offers a thought-provoking picture of a family facing a crisis, brought about by the mother’s cognitive decline, presumably due to Alzheimer’s disease.  “Winter” explores the conundrum of suicide and autonomy in a good marriage and a loving family.

Directed by Gary Graves, the play is set in the home of an affluent older couple, over the Thanksgiving holiday. Central Works uses the comfortable, plush living room at the Berkeley City Club, with its stone fireplace, to convey the atmosphere of an elegant and refined home. A wintry landscape hangs over the mantle.

The elderly couple seem to be preparing to move somewhere, but where?  Amid the packed up boxes, Robeck (a thoughtful Randall Nakano) busies himself with his  scientific research, working at home because the university has taken away his lab.

Annis, his wife (the impressive Phoebe Moyer) tries, unsuccessfully, to tell him how much her memory loss is distressing her. Robeck persists in denying that anything has changed, despite the fact that the university has put him out to pasture and despite his wife’s obvious decline. Robeck refuses to face the terrible truth:  Annis’ dementia is worsening.  He allows her to face the terror alone.

Annis, played brilliantly by Moyer, is terrified of what the future may hold. An accomplished writer, she is terribly distraught that her mind may be slipping away.  Annis is experiencing disorienting bouts of confusion, forgetting words, and remembering her mother’s last awful days. She implores Robeck to carry out their suicide pact with her.

Annis recalls the film The Ballad of Narayama, a story set in early Japan, where an old woman is taken up to the mountains to die of exposure, following the village’s custom. But Robeck feels that the time for death has not yet arrived for either of them.

Their elder son, Roddy (the dominating John Patrick Moore) and their younger son, Evan (the intriguing Steve Budd) arrive. The sons make up two more players in the conflict over what to do when people can no longer care for themselves.

Roddy is a driven man who has little time or tolerance for disorder. He wants to do the usual thing that adult children do, which is to pack the parents off to someplace where they will be cared for. He storms in, ready to call the moving van immediately. Roddy has little regard for his parents’ desires, although they are still well able to make decisions. He tries to pressure his younger brother, Evan, to move in with their parents.

Evan, the bohemian younger son, has his own life to live, and refuses to be forced into caring single-handedly for their parents. More concerned with the real lives of people than material things, Evan insists on his mother’s right to decide what is right for her. The struggle between the two brothers is powerful and potent in this production.

Determined to die alone if she must, Annis enlists the aid of her granddaughter LD (an irreverant Julie Kuwabara) who would dutifully take Annis up to the mountain.

“Winter”—a Rolling World Premiere by Central Works—is well worth watching closely, especially for those struggling with the dilemmas of aging or terminal illness, which sooner or later, will be most of us.