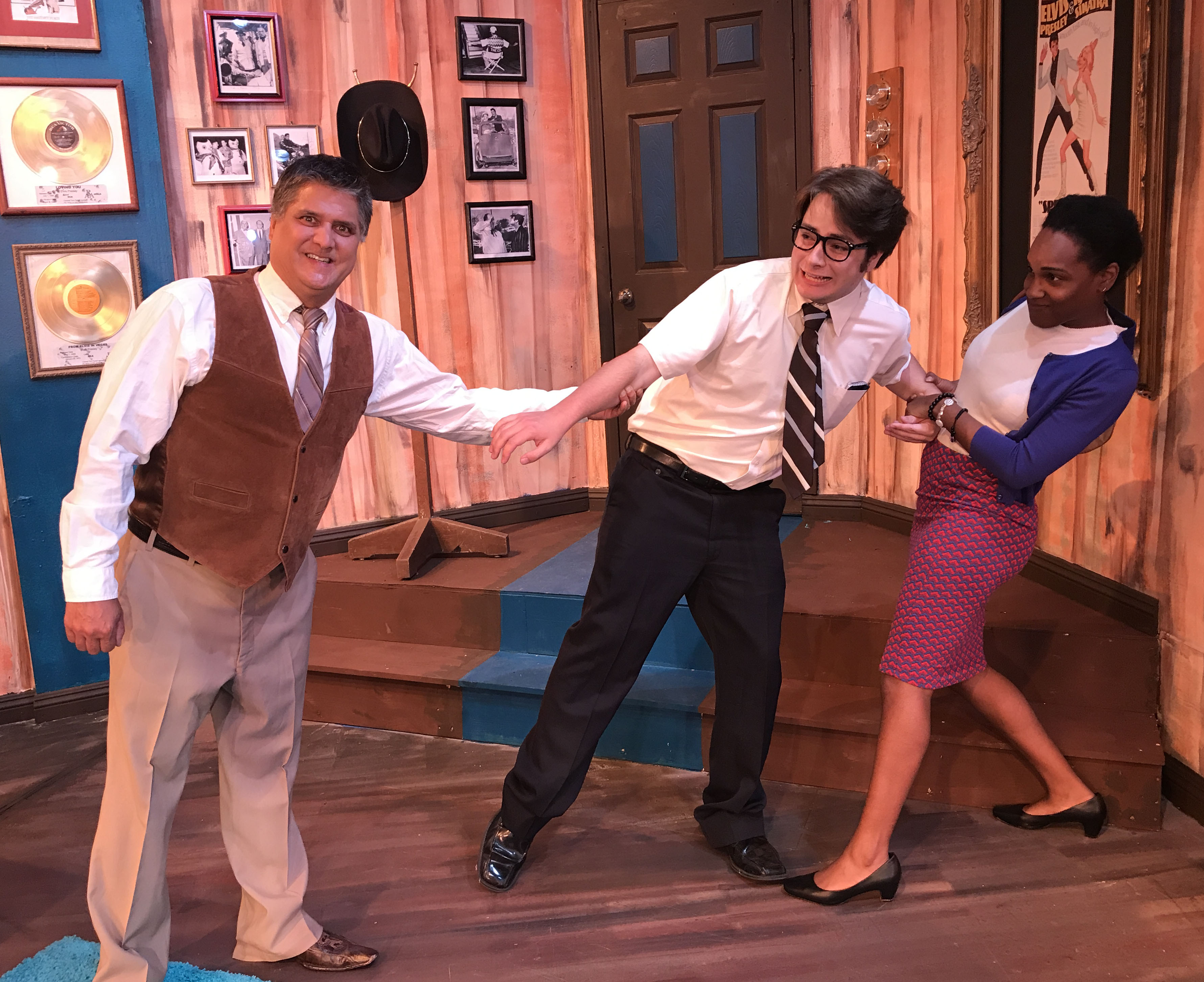 In the rollicking comedy “Elvis Has Left the Building,” Chanticleers Theatre features The Colonel, a blustering, self-centered huckster and con-artist who calls himself “The Snowman.” The Colonel can trick anybody into buying anything—except for the sharp reporter, Jill Tanner, who refuses to  buy his bullshit.

The Colonel, a loud-mouthed quasi-southern gentleman discovered Elvis Presley, but is losing control of The King. The intense confrontations between the sleazy Colonel (the blustery Jeffrey W. Tan) and the sharp-witted reporter (the astute Tyler Jeffreys) are a pleasure to behold. “Elvis Has Left the Building,” by V. Cate and Duke Ernsberger reminds us of the daily struggles between Drumpf and CNN. Jeffrey’s Jill Turner gives us an ideal reporter, rendered with gusto.

The play involves hypnotism, Elvis impersonators, and Mafia gambling debts. The Colonel, based on Col. Tom Parker who put Elvis on the map, needs one more show to pay-off his gambling debts. When the real Elvis goes missing, The Colonel takes advantage of his minions and gets himself into muddy waters.

How is the Colonel going to come up with Elvis for a show in one night? Perhaps his loyal but rigid German secretary Trudy (the precise Marsha Howard) can help?  Maybe the geeky office intern Roscoe (the quick-witted Will Mattingly) can imitate Elvis?

The Colonel’s only friend Candy, (the talented Jonathan A Gergen), exhibits perfect comic and musical timing. Candy also transforms himself from lanky hanger-on to fabulous faux-Elvis—by magic means which I will not reveal here. But they are hilarious!

The two Elvises are whacky—totally convinced they ARE the “real” Elvis. They take us out of our own reality and into a fully-realized 70s world, where trickery and shenanigans thrive. Director Jacob Russell-Snyder brings a fresh sit-com style and warm humor to make us love these two Elvisi.

There’s nostalgia galore for those who remember Elvis and the 70s: Audiences laugh out loud at the Elvis songs, the posters, the platinum records on the wall. Lots of laughs at the snarky references to Robert Goulet, “Return to Sender,” and glittery silk jump-suits with wild fringes flying.