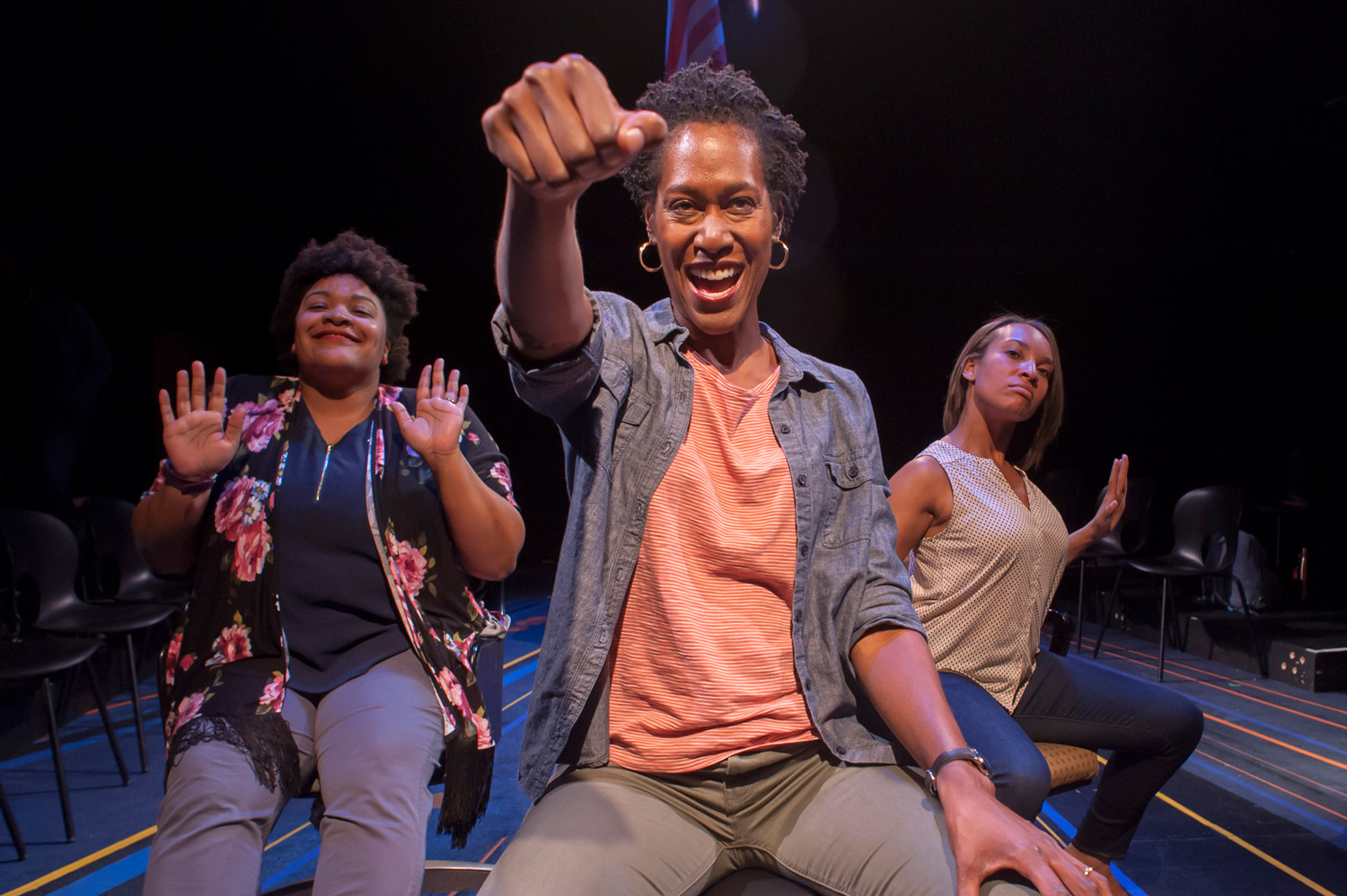 Finally, a Black American play that is not about being Black. “Zenith” by Kirsten Greenidge reminds us that Black Americans are normal citizens who deal with the same problems as everyone else. The problems in “Zenith” are not related to race. With a powerful mostly Black cast, Director Lauren English takes on the American Dream’s tyrannical conformity and our idea of “Perfection.”

With American culture comes the pressure to pay outlandish bills, monitor perfect children, and install flat screen TVs in your SUV.  The play depicts the delusions behind the American Dream. Angela (hypnotic Atim Udoffia) and her family enjoy lots of middle-class trappings. Angela believes she lives at the “Zenith” of American life, but they still cannot make ends meet, living paycheck to paycheck, and enchanted by “shopping.”

Because the advertised, commercialized concept of“Perfection” breeds intolerable pressure on her, the driven Angela  cannot take the time to relax. An American flag, tall and still, appears, prompting us to reflect on our culture’s role in Angela’s dangerous decline.

Angela, an educated, successful young woman, drives her car down the freeway, feeling exhilarated and liberated. But her euphoria is too good to be true. Scenic Designer Jacquelyn Scott has painted A.C.T.’s Costume Shop dark floor with fanciful, abstract traffic lanes on a highway at night. Yellow lines stand for the whir of speeding headlights and large red dots suggest myriad brake lights. Lighting designer Sophia Craven paints pinkish-orange sunshine on the highway as Angela drives, setting the scene for a climactic disaster.

Greenidge takes us into the lives of two couples, four over-worked Americans. Angela, the fun-loving aunt and mother is married to Chuck (agonized Adrian Roberts), a “nuts and bolts” type of guy. Angela’s brother, Timothy (sympathetic Khary L. Moye), is married to his Harvard sweetheart Hazel (sensitive Nia Fairweather). Yes, all these actors happen to be of African descent. They also represent typical working Americans struggling to raise small children on tight schedules and slim budgets.

Angela lives in her dream of utopia, while the others deal with the dregs, feeling the pull of danger to the middle class.

Director Lauren English has choreographed a rapid-fire sequence of startling yet engaging scenes in this Sandbox Series work-in-progress by S.F. Playhouse. We experience typical family quarrels, like Angela’s trying to convince Hazel to let her take all their children on an strange and forced camping trip. The outcome, based on a true news story, seems more a shocker than an earned event.

Angela takes dramatic deep breaths, as she readies herself for the drive. It seems like she is going into battle. She is cheerful to the point of being manic and self-righteous.

Greenidge uses documentary style flashbacks, with reporters interviewing Angela’s neighbors. Indiia Wilmott and Sally Dana deftly portray several striking characters who testify about what happens. The small, dark theatre feels brighter each time Wilmott steps into the spotlight. Her roles vary from a dance-deprived working mom to a sassy lady of the Caribbean. Each time she reveals a new bit of scandal, we learn that Angela’s life is far from “perfect.”

Chuck travels a full and touching story arc. He checked out on Angela years ago. After the terrible climax, Hazel attacks Chuck, saying, “You should have loved her!”As Hazel, Nia Fairweather travels a vast emotional journey that must be seen and savored.

The character of Angela shows that we all must ask for help before it is too late. These overworked Americans are being pushed to their limits. People will say she’s crazy, but in fact she and her family are victims of economic exploitation. Greenidge opens our eyes to how privilege and inequality affect the lives of everyday working people in America.

The flagpole and flag onstage startles and enlightens us, finally, suggesting there’s something terribly wrong with the lives we are living. When Lauren English’s superb cast run it up the flagpole, see if you salute. Get ready for an enlightening and emotional trip.