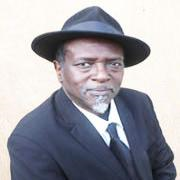 The lights come up on a room with two pictures on the wall: Martin Luther King, Jr. and Tiger Woods. We are in the office of earnest real-estate developer Hamond Wilks (Geoffrey Grier), in 1997. Wilks has partnered with preening banker Roosevelt Hicks (Gift Harris) on a deal. Wilks dreams like MLK, while Hicks maneuvers like Tiger. Later, one of these portraits will be ripped from the wall.

Multi-Ethnic Theater and S.F. Recovery Theater score with Wilson’s poetry and characters. Because wrong-headed urban “renewal” ruined the Hill decades before, Wilks wants to awaken the blighted Hill neighborhood with a new shopping and apartments. He has Whole Foods, Barnes & Noble, and Starbucks in the bag: “We’re going to bring the Hill back. We’re going to rebuild the whole Neighborhood.” When Wilks announces his candidacy for Pittsburgh mayor, warm-hearted Grier has us rooting for him.

In contrast, Roosevelt Hicks, a man-on-the-make, pursues money and power—and playing golf is his passion. When he is invited to play with the richest man in town, he blissfully feels like an insider: “Bernie Smith don’t play golf with just anybody. He play with millionaires. I ain’t there yet, but playing golf with people like Bernie Smith will get me there.”

Hicks has no problem being the Black façade for white businessmen who are seeking minority tax breaks. Harris plays Hicks as unapologetic, ambitious, and proud.

Wheeler-dealer Hicks sneers that many Black people lag behind, while others like himself succeed. He thinks the “losers” lack ambition and hard work, and they blame others for their failure. He challenges handyman Johnson: “Roosevelt Hicks got money … got a job …. You … kill me, blaming somebody else for your troubles. Get up off your ass … Oh, I see you can’t do that ’cause Roosevelt Hicks is holding you back.” With the assurance of a king—and Wilson’s magical words, Johnson witheringly schools Hicks on social class, and the sorry delusions of a Black man trying to be white.

Sweet, stalwart Elder Joseph Biglow (Kevin Johnson), an older man displaced by the rebuilding, meanders into the office, comically wise, and full of stories. Biglow lulls us with his idle talk—then suddenly, the story turns, and we are staggered.

Stylish, practical Mame (Nicole Harley), Wilks’ wife, puts her high-powered career on hold to work on her husband’s mayoral campaign. She fails to fathom his love for the old Hill District. When she sees the office he rents, her disappointment erupts: “So this is it? This isn’t anything like the way you described it. This ceiling’s what you were so excited about? Hamond, it looks raggedy.”

Hamond answers, “Look close. See the embossing on the tin. See those marks. It’s all hand-tooled.” The look in her eye and her posture tell us that she does not get it. Mame, a pragmatist, has her eye on a plum political post after the campaign. Like Roosevelt Hicks, she has places to go.

It’s tough for anyone to make it to the 1% and keep their decency. For a Black from the Hill, there are the added obstacles of racism—along with the danger of losing your history.

“Radio Golf” is less subtle in plot line, its characters more absolute, its manner more moralizing than most of Wilson’s plays. Wilson’s individualists wrestle with duty, betrayal, and love. In the Bay Area, we hear all the time about evictions of vulnerable old folks. We are living the horrors and hopes of “Radio Golf.”

August Wilson’s ending rocks. We find out if a man will trade his principles for success, cowed by big money. Will he stand defiant, and challenge the legacy of bigotry? Damn right, it’s good theater.