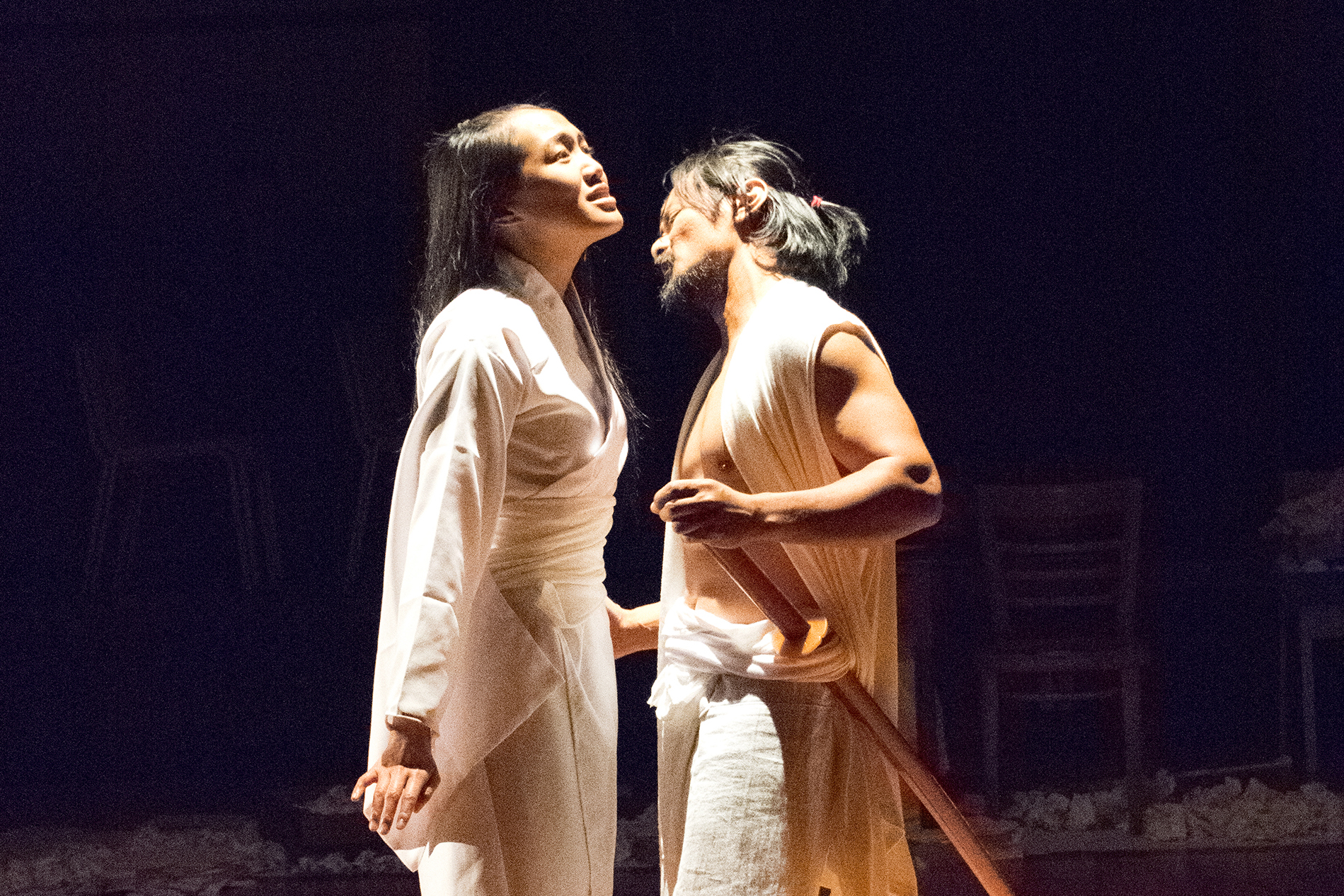 Say a lie long enough and loud enough, and it becomes the truth.  “Rashomon”

In Philip Kan Gotanda’s new adaptation of “Rashomon,” fake news and “alternative facts” take on a life of their own, as he presents us with contradictory accounts of a Samurai warrior’s violent death.

Gotanda uses Akutagawa as the name of his main actor, a writer. Akutagawa is also the name of the actual 1920s masterful writer of the short stories that inspire “Rashomon.”  In the opening scene, we meet Akutagawa (inspired Steven Ho), the writer, who is frustrated in his attempts to decipher the truth from several conflicting testimonies.

Before any words are spoken, three actors glide silently onto a sparse, darkened stage, taking ghostlike trajectories past the writer, who is seated at a typewriter. Like ephemeral thoughts, they struggle for dominance in Akutagawa’s brain.

As the stage brightens, an intricate shadow, like light filtered through a shoji screen, covers the stage. In the opening dialogue, a Priest (passionate Ogie Zulueta) laments the death of the Samurai, as well as his own tortured life, in a soliloquy that is both questioning and philosophical. Although Akutagawa appears innocent and confused, he later becomes an accomplice. He brings weapons to the actors, encouraging them to kill, or commit seppuku, ritual suicide. These weapons can be metaphors for a writer’s way of exerting power.

While Akutagawa wears 20s style casual dress, the rest of the cast wear traditional, flowing white Japanese karate attire.  By keeping them in the same costumes throughout, Gotanda intentionally blurs distinctions between the multiple characters.

Can we figure out who or what is responsible for the death of the Samurai (outstanding, multi-faceted Jomar Tagatac)? Each version of the dire event seems so plausible that we cannot fix on one solution. Paradoxically, all the actors are so committed to their versions of reality that they leave us momentarily convinced, and then uncertain about “the truth”—a delicious ambiguity.

The players are excellent and enthrall us with their skill and passion, as they portray contradictory characters. Christine Jamlig is scarily chilling as the Wigmaker who steals hair from recently dead corpses. Yet, when she plays the Lady, a widow, Jamlig tenderly elicits our sympathy at her loss of her husband.

We react with horror when the Lady is savagely raped by the Bandit. But later, she becomes the dominant player in the sexual encounter—under the gaze of her husband.  Is she a victim or a cause of the Samurai’s violent death?

As Priest and Bandit, Ogie Zulueta plays a strong counterweight to the Lady, as he delivers a powerful performance. He is threatening as the fearsome Bandit in one scene; but pitiable in another as an ineffectual buffoon who steals only to support his many children.

There are no easy answers in this play. Like the recent protests in Berkeley, your conclusion will depend on the lens you use. The play runs for an hour and 45 minutes, and some may be confounded by its twists and turns. Rather than the four points of view in the Kurosawa film and in the stories, Gotanda’s “Rashomon” offers seven or eight versions. Fewer scenes could raise the impact. The idea of the Samurai as a pedophile introduces yet another innovation.

Gotanda brings Akutagawa to life as his oracle, delivering ambiguous messages. The play is a jarring commentary on the turmoil in our world, and the rise of “alternative facts.” I highly recommend this fine offering by the Ubuntu Theater Project. They strike gold again in OakTown.