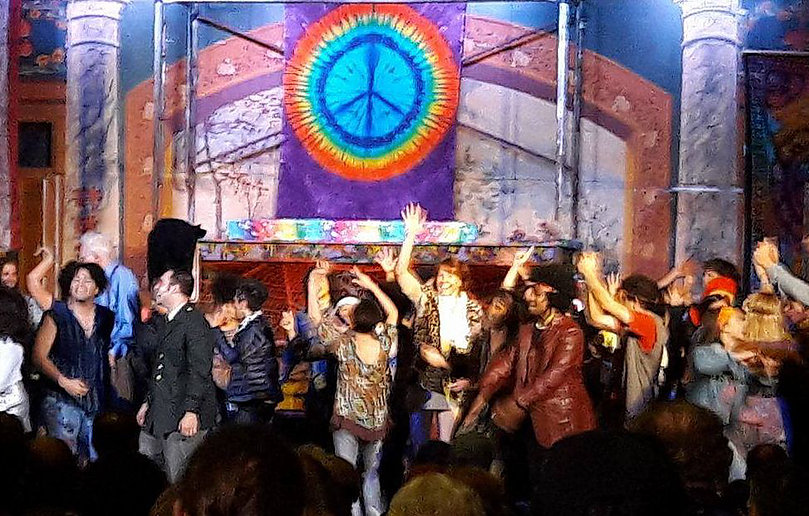 As the 50th Anniversary of the Summer of Love draws to a close in San Francisco, Landmark Musical Theater has revived the classic musical “Hair.” The tribal rock musical celebrates the hippie counterculture of the 60s, and the protests against the Vietnam War. “Hair,” of course, refers to the luscious locks that grace the head of nearly each cast member, a rejection of the 50s crew cuts. The show is known for its in-your-face exposure of sex in a time when talking about sex was taboo. And “Hair” brought nudity onstage front and center.

Fifty years later, the final sequence still punches us in the gut. The finale explodes with the touching death of Claude (brooding Domonic Tracy), a victim of the quagmire of Vietnam.  The audience is fully invested from start to finish. With strong performances from an eager, young cast, the 2017 version is still exciting, but showing its age. “Hair” is a great document of the 60s, but the out-dated sexism, racism, and homophobia of the original is out of synch with our current crisis.

At the Great Star Theatre, Director Jonathan Rosen uses great grungy grafitti and hippy fringes to take us back. You can feel the East Village vibe. Dave J Abrams as Hud and John Charles “JC” Quimpo as Margaret Mead run away with their hilarious scenes. Abrams’ voice shines and his performance breaks through the large cast. Quimpo’s drag version of Mead fools us, as we follow her hilarious honeymoon trip.

Because “Hair” is portraying Hippie life in 1963, the characters’ points of view are difficult to reconcile with our own.

Many of the women in “Hair” suffer from men’s emotional or physical violence. At one point, Sheila (clear-eyed Corrie Farbstein) gives Berger (bawdy David Erik Paterson) a yellow shirt. When Berger rips it up, she yells at him and Berger slaps her. Three women are slapped in this show, and they all forgive their abusers, immediately, or after a song extolling men who hit them!

Crissy (sensitive Jackie Bonsignore) sings a song pining for an unattainable man, with lyrics saying that she will do anything for his attention. Where are the noteable women of the 60s?  Where are the hippie counterculture and anti-war protesters, like Angela Davis, Gloria Steinem, and Jane Fonda?

While “Hair” makes space for black voices and roles, they are given very little to do. The song “Black Boys” is filled with shocking stereotypes from the 50s and earlier. Lyrics such as “chocolate flavored love,” “mocha mousse, hot fudge,” and “hot brown sugar daddies” dehumanize, making the black male characters nothing more than sexual objects.

“Hair” handles queerness awkwardly, leaving much to be desired.  Queer sex comes up sparingly. Instead, Queer antagonism is frequently aimed at Woof (waif-like Pablo Soriano) who espouses his love for Mick Jagger. Berger and Claude tease him about his sexual attraction to Jagger, which he denies.

Given the difficulties of coming out and the homophobia still present even in the Bay Area, “Hair” could use a trim.

“Hair” nicely wraps up the 50th anniversary of the Summer of Love, filled with the uncomfortable truths of the 60s. The musical reminds us how much further we still have to go to reach the world they imagined.