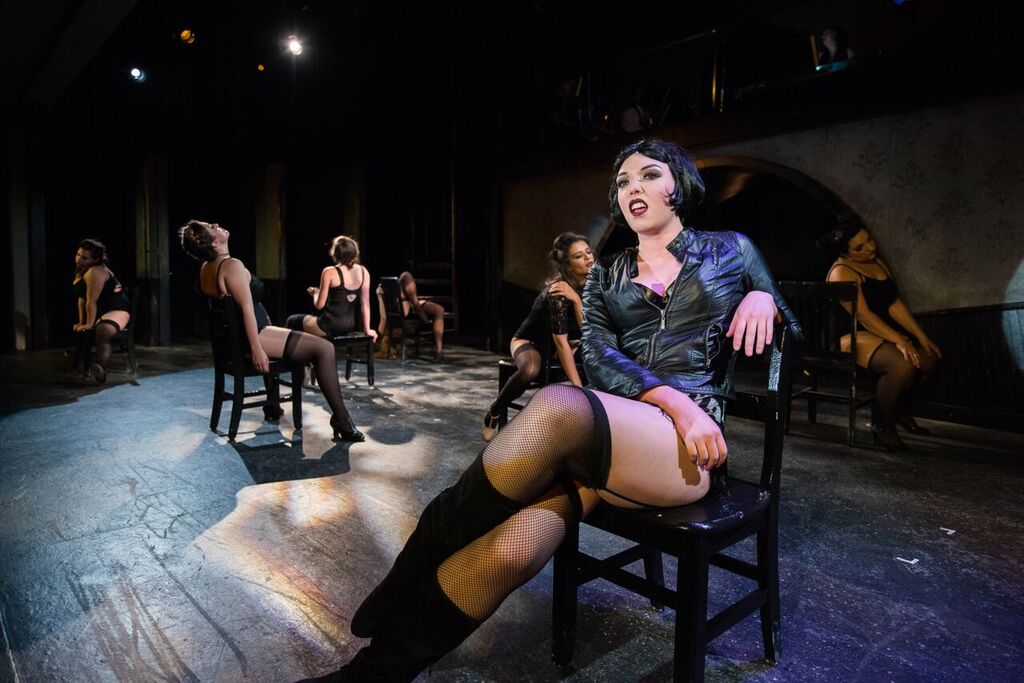 The alt-right has risen in the East Bay. And I’m not just talking about the seemingly unending parade of Milo Yiannopoulos, Anne Coulter, Ben Shapiro, and others on the far right claiming their right to speak at Berkeley.

Contra Costa Civic Theatre’s new production of “Cabaret” shows us just how terrifyingly relevant Kander and Ebb’s classic musical remains—especially in these days of returning “white supremacy” notions. Director Marilyn Langbehn reminds us what we’ve been learning too well lately: the creep of authority is slow, but steady.

The musical takes place between 1929 and 1930, in the German Weimar Republic, just before the rise of the Nazi Party.  Randy Wong-Westbrooke’s sparse set uses wooden ship-lap walls and peeling wall paper, to suggest the rundown Kit-Kat Klub and a poor German boarding house. We can feel and sense the decay, both physical and moral. Courtney Johnson’s lighting design makes sure that an ominous red invades the show, especially in the second act, reminding us that Hitler will be coming.  The specter of fascism creeps into scenes.

The magnetic Annika Bergman portrays an independent and savvy Sally Bowles, who in other productions often is reduced to a clueless waif. The British expat degrades herself by singing nightly at the seedy cabaret to scrape a meager living. Bergman never lets us forget that Sally has mastered the art controlling her own life.

But the Nazi walls start closing in on her. Even when she is emotionally vulnerable, she finds a way out, with a smirk. What a perfect counter to the alt-right’s attack on women.

Cameron La Brie stands out as the Emcee: he highlights the depravity that teeters on insanity. As we watch Germany and the Kit Kat Klub collapse around him, La Brie elicits our sympathy.

Director Marilyn Langbehn’s “Cabaret” plays with our expectations, brilliantly. In the song “If You Could See Her,” the Emcee dances with a gorilla while singing about being in love with her—if only you could see her through his rose-colored glasses. I have seen “Cabaret” multiple times but Langbehn brings us up short. When the Emcee sings: “If you could see her through my eyes, she wouldn’t look Jewish at all,” we are startled. The racial slur elicits a few nervous laughs. What a great reminder of “racial superiority” under the Nazis.

Langbehn writes in the Director’s Notes: “We see images of Nazis and Antifa clashing in our streets. Racist rhetoric is no longer hidden, but is alarmingly visible, even common.” As the show draws to a close, we see the slow march towards Nazism as inevitable. This production of “Cabaret” makes the connection between our country’s present and Germany’s past.

German fascism and Trumpism echo each other. The similarities between Red Nazi armbands and U.S. red baseball caps strike home. This “Cabaret” is made for now.

Contra Costa Civic Theatre’s “Cabaret” reminds us that we need to fight back—and harder. The writing is on the wall. The windows have been broken and fascism is rearing its ugly head, once more.  CCCT gives us a road-map, and this Sally Bowles, a resourceful and feisty woman, reminds us that resistance and survival are always on the agenda.