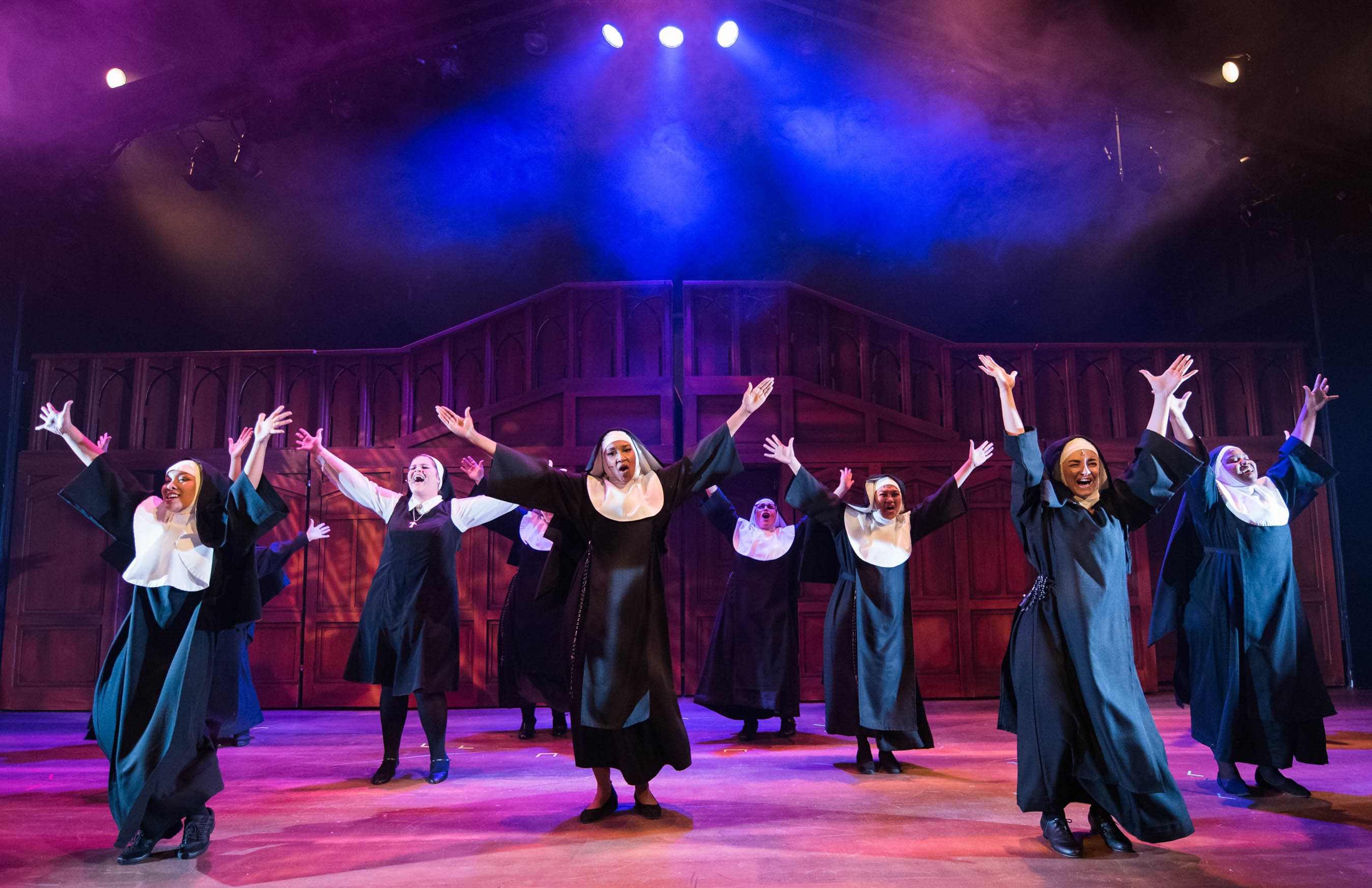 Alexis Lazear Gets Groovy with Nuns

What a great pleasure to watch a dazzling Disco Queen, inspired nuns, and insane bad guys,  grooving with us to great 70s tunes. “Sister Act: The Heavenly Musical Comedy” magically combines social justice with social crisis in the story of an African American singer who struggles to bring joy and survival to her community. When the nuns accept her as one of them, we see a vision of our possible sisterly future.

As we enter Julia Morgan’s redwood masterpiece, once a church and now the Berkeley Playhouse, we see disco lights and hear disco music. The funky beats of “Sister Act” take us back to the 70s and that pulsing beat.

The main character Deloris Van Cartier (multi-talented Elizabeth Jones) sashays onto the stage with her rockin’ back up singers. Together, they light up the room with their hot costumes and warm voices, transporting us to a downtown Disco Girls’ paradise!

Deloris is an aspiring disco queen, and her manager boyfriend, the husky Curtis Jackson (Anthone Jackson), is promising her that he will get her into show biz. Curtis and his gang of homeboys Joey (Chris Plank), TJ (Marcel Saunders), and Pablo (Jesse Cortez), are suave but rough around the edges. When Curtis stumbles into murder in front of Deloris, he embarks on a mission to kill her. DeLoris is on the run!

If Curtis Jackson’s misogynistic musical mantras don’t make you hate this villain, then I don’t know what will. Jackson hunts her down, while singing the diabolical song “When I Find My Baby.”  In the song, he reveals all the horrible things he will do to his “baby” for going to the cops—from choking to beating. This villain is big, bad, and plans to annihilate poor Deloris!

We see the stage transform from a nightclub with gangsters into a Catholic church full of nuns. Mother Superior (Heather Orth) is livid that the secular sexpot Deloris is impersonating a nun. When disco diva Deloris leads the nuns out to a nightclub, she is forced to join the Church Choir. as penance.

But resourceful Deloris builds tight bonds with the nuns as they sing and dance together. She even concocts a heavenly scheme to save the bankrupt Church. Thanks to Disco Queen DeLoris, everyone in the beautiful, soaring Berkeley Playhouse is rocking out to the gospel music. I can barely stay in my seat.

The show ends with a song from the ensemble titled “Spread the Love Around,” reminding us to love one another. The Choir rocks with their message: Regardless of religion, social class, or gender, Love remains the key to happiness and the path to solidarity. Watch the street scene and the church scene come together and show us how to create sisterhood—with a disco beat.