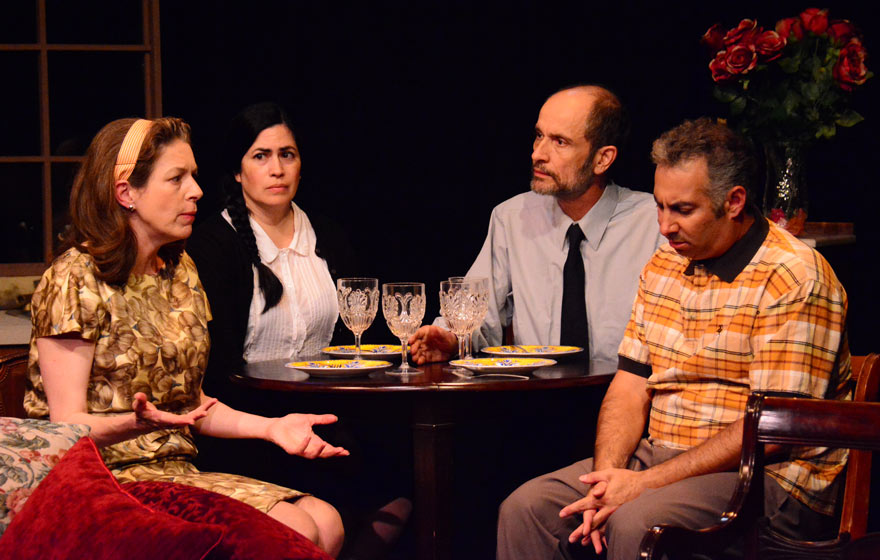 “The Unveiling” does a convincing and realistic job of getting across what a new immigrant in America must feel like. Once we are in the small apartment in post-WWII Brooklyn, we feel right at home with Linda Ayres-Frederick’s Rabinovitz family. In the ghetto, the Rabinovitz apartment offers a simple haven to Jewish immigrants, complete with Yiddish accents and intrusive reminders of the Nazi death camps.

But in that tiny Brooklyn apartment, a tempest is brewing. Herschel (elegant Richard Aiello), the father and a leader in the Synagogue, is protecting his two daughters, Sadie and Natalie from the hatred and fallout from the war. They form a loving but edgy, anxious Jewish enclave.

The skillful acting draws us into this tight-knit family set on edge by their father’s secret. Herschel escaped from a Nazi prison camp, but his wife did not make it out. Linda Ayres-Frederick plays on the gradual unveiling of Herschel’s long-lost history. Under the precise direction of Julie Dimas-Lockfeld, “The Unveiling” offers surprises every step of the way.

Into this intense mix comes Mrs. Goldfarb, surely a classic Yente, a Jewish gossip, played by the playwright with authentic humor and gusto. Mrs. Goldfarb brings hints of old world suffering and new world violence into the Rabinovitz’s tiny apartment. Ayres-Frederick has a wonderful ear for the rhythms of Yiddish, newcomers, and anxiety.

Each character contributes an essential piece of the Holocaust story. But Herschel’s younger brother-in-law, Shmuel Cohen (lively Evan Sokol) turns out to be the wild card in the deck. His sudden arrival from Israel unsettles the household as he tries to assimilate into American life.

These immigrants tread on shaky ground, half in the old world and half in the new. We all have been there or our ancestors have—we are a nation of immigrants, lest we forget.

In fact, “The Unveiling” takes place before, during, and after the war in Europe, using flashbacks to takes us to a train station platform at Bergen-Belsen and an escape tunnel from the Auschwitz death chamber. These haunting memories draw us into the dark secrets of Nazi horrors.

When the scene flashes back to Auschwitz, a Nazi guard (cocky Michael Shipley) makes a nefarious deal with Herschel. The results of Herschel’s pact haunt him until the final unveiling. “The Unveiling” presents an intense moral dilemma and an emotional script, exposing hard won truths through a profound visit to the past.