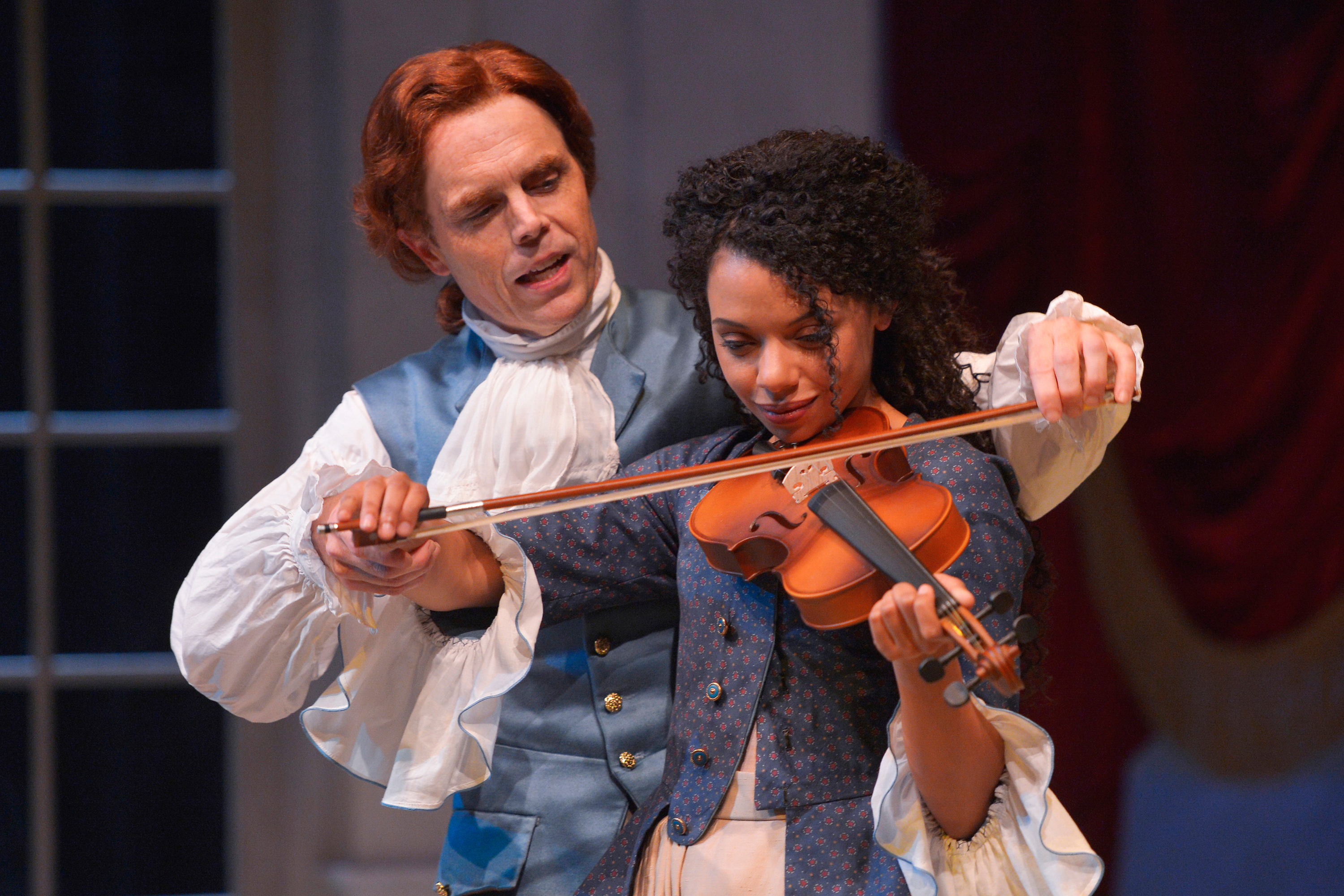 Thomas Bradshaw has stirred up a hornet’s nest. In “Thomas and Sally,” he is messing with Thomas Jefferson, and his long term sexual domination of his slave, Sally Hemings. In the play, Jefferson begins an “affair” with Hemings while he is Ambassador to France, when she is only 14 years old. After they return to Virginia and back to slavery, they have six children over thirty years. “Thomas and Sally” investigates sexual slavery during the Revolution, employing speculation and humor.

If you want to see the Founding Guy lampooned, satirized, and ridiculed, Thomas Bradshaw’s Jefferson will fit the bill. Can we enjoy this play while we are outraged at Jefferson’s hypocrisy? Well, yes, because these are characters in a play based on history, but also full of fiction and speculation by playwright Bradshaw. It’s a common practice to take the facts we know and then elaborate them to make a show—how about “Amadeus”?

Sean Fanning’s set, a towering colonnade, looms over the whole show, in a serio-comic comment on the modern and colonial proceedings. These words, from the Jefferson Memorial, are inscribed, high up, in magnificent marble:

HOSTILITY TOWARDS EVERY FORM OF TYRANNY OVER THE MIND

Jefferson’s words stare down at us in stone, highlighting the distance between his ideals and his practice. What better motto for the humor and the horror inherent in our founding ideals and his failure to live them?

Jefferson (keen, focused Mark Anderson Phillips) keeps claiming he is against slavery and argues with other Virginians against it.  But his actions, his condescending manners, and his lifelong slave-holding all betray his dilemma. It boils down to profit over people, as usual. But Bradshaw inserts a hint of love, here, too, which makes us shudder at the paradox.

We meet John Wyles (Sicular) who is Jefferson’s father-in-law and Hemings’ father. Wayles takes Betty Hemings (noble, elegant Charlette Speigner), a wise slave in his house, as his concubine. He has several children with her, bringing up questions about generations of Hemings/Jefferson intercourse. Here is the core of the play, focused on a supposedly warm relation between Wayles and Sally Hemings’ mother.

“Thomas and Sally” sparkles with great roles, including the subtle portrayal of Sally Hemings by Tara Pacheco, who brings individuality, reflection, and grace to the role. Her Sally deserves a play to herself, as do her talented brothers. The play offers a cornucopia of rich characters, lovingly played by the first-rate cast. Minadakis goes for broke, flushing out fresh speculation and wit at a wicked pace.

Peter Callender plays Jupiter Evans and a French tailor, each role filled with his acting genius. His Jupiter, a slighted slave, carries power and authority, when Jefferson cruelly spurns him for a younger slave. Jefferson, himself, as played by Mark Anderson Phillips, flaunts an aristocratic grandeur betrayed by every downward glance upon the people he calls his “servants.” With Jefferson’s efforts to rationalize slavery by being a “good” slave owner, Bradshaw gives us rich irony and food for debate.

So many stories at work here, and so many fruitful contradictions, too, that I want to see the play a second time—for the fun and for the ironies that must have been hard to bear for both Thomas and Sally, master and slave, father and mother, our true Founding Family. Can we ever know what passed between these two in that skewed relation, even as Jefferson spouts “equality”? In trying to revise history, Bradshaw fills in one missing story of our family. Bradshaw’s brilliant satire is finally touching and moving—and can even bring a tear to your eye.