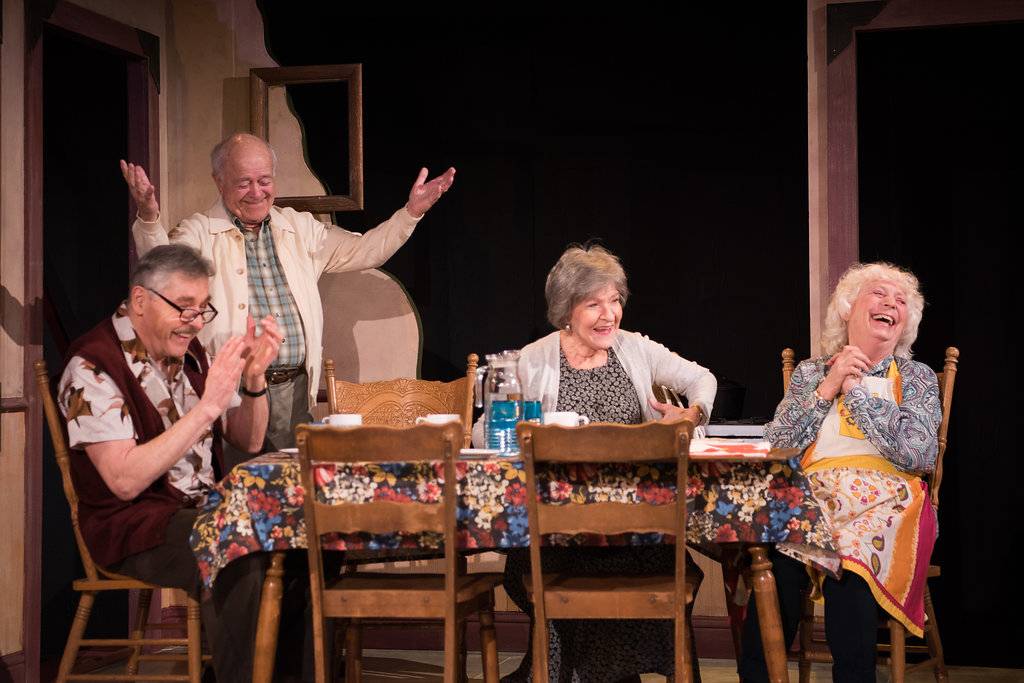 If you’re going to grandmother’s house for the Holidays, take in “Over the River and through the Woods” at Contra Costa Civic Theatre in El Cerrito, first. Joe DiPietro’s play will prepare you to appreciate annoying relatives, excessive feasting, and possible blind dates. You may get to know your grandma, your auntie, or uncle a little bit better.

“Over the River,” taking it title from the Christmasy song “to grandmothers house, we go,” depicts an Italian family in Hoboken, New Jersey.  The show has remarkable reach into each of our lives. Director Mike Reynolds tells us that “the show…is a memory play,” told from the point of view of Nick Cristano (exasperated Ben Knoll). Nick’s memories of his grandparents in New Jersey remind us of all our families and the new families we have made for ourselves.

Nick’s grandparents, Frank Gianelli (no nonsense Keith Jefferds) and Aida Gianelli (inspired mama-mia Lynne Hollander) offer him “family, faith, and food” to solve all life’s problems. Frank teaches Nick: “Tengo famiglia!”—I have family!—and tries to keep him close to Hoboken. Aida’s solutions are more practical: “You look like you need something to eat? How about some lasagna?”  These doting and lovely folks from Italy want to keep him safe—and close to home.

Of course their own daughter and son-in-law, Nick’s parents, have already moved to Florida—abandoning the siren song of New Jersey.

Frank and Aida have simple solutions for all problems, and like many old-time immigrant families—they refuse to listen very much to Nick’s modern problems. So, is family enough, for the agonized, gentrified Nick?

We are touched by his two sets of grandparents—he is lucky enough to have four. The elder Cristanos live near-by: Nunzio (lively Tom Flynn) and Emma (thoughtful Christine Macomber). They join in for the Sunday dinners, when Nick comes up for a few hours from New York City. The four grandparents are scheming to keep Nick local—can they accomplish it against all the U.S. cultural odds, these days?

Nick has an important announcement to make—he’s got a great job offer in Seattle—but he knows the four old-school Italians want to keep him near-by. And hence, ensues family comedy, hi-jinks, and one-sided lectures. Conversation is pretty unknown—the old folks expect to be honored—Tengo famiglia!—and that’s that, they see only their side of the debate. Sound familiar?

Maybe there’s a change afoot in this stage set that looks like the 50s or 60s. Maybe their values are not so out of date as first appears. Each family member gets to have a selfie of her/his memories, and each is heartfelt and honest. Yet, they are trapped in a “glass menagerie” of their own. They want the best for their grandson, but the new values are so elusive to them: maybe they gave their kids too much, maybe they gave up their lives on a bad bet? And are these mobile wandering young folks really happy? Or, are they on a treadmill to oblivion?

The charming blind date Caitlin O’Haire (Courtney Shaffer), a sweet, smart nurse, comes to dinner and charms the wayward grandson, but their little meeting goes off the rails quickly. Each member of the family and dear Caitlin, they all try to hold out hope that wayward Nick will stay near Jersey.

But America has changed. Famiglia has given way to ambition and selfish individuality—great for a lot of laughs, but what can it lead to?  Seattle? Or, maybe some self-realization. Hang on for a wild ride to enlightenment—just in time for the Holidays.

“Over the River and through the Woods” by Joe DiPietro, directed by Mike Reynolds, at Contra Costa Civic Theatre, El Cerrito, California, through Sunday, December 10, 2017. Info: http://ccct.org