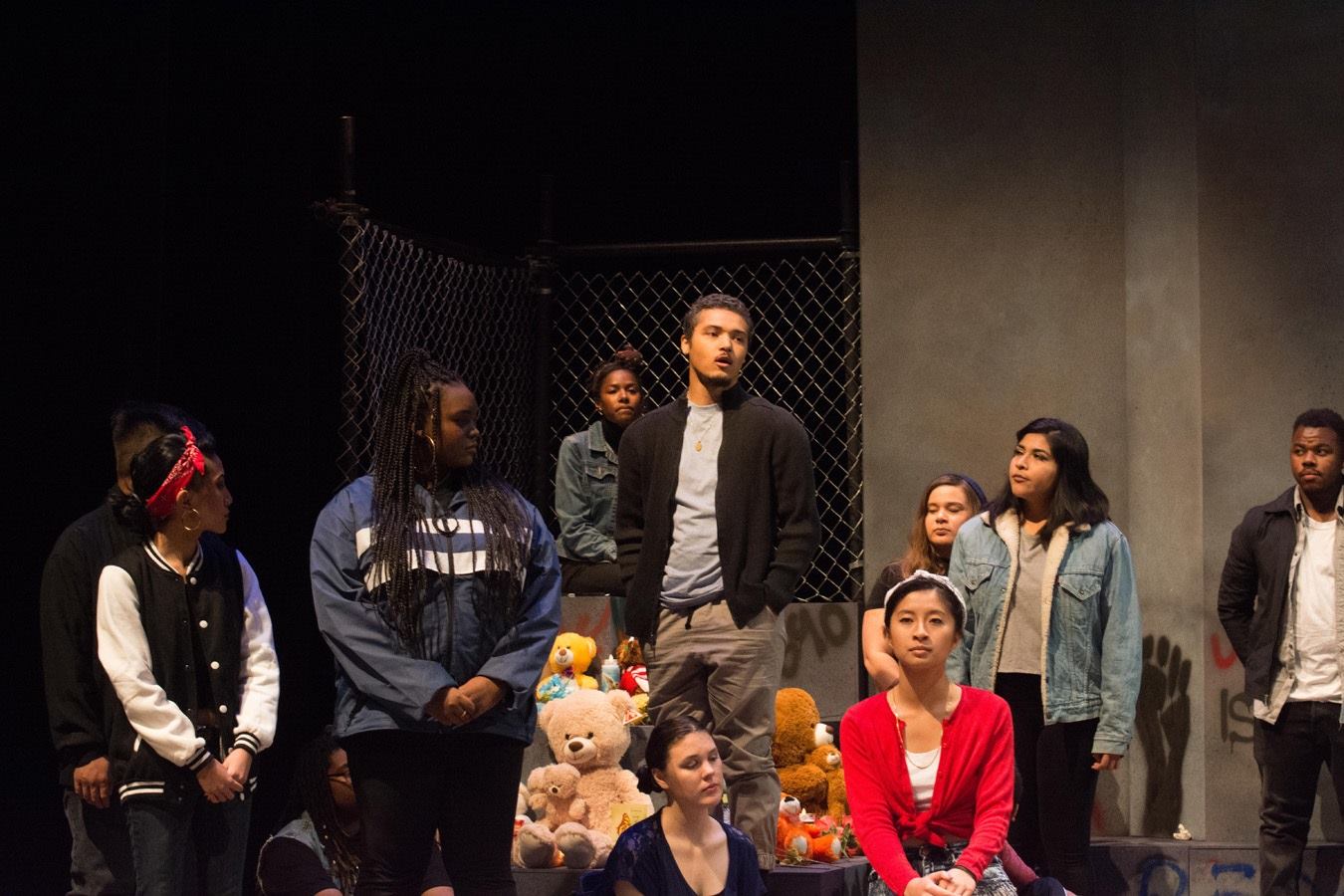 Over the course of “CSU Ferguson,” at Cal State, East Bay, thirty college students have a chance to tell their stories of suffering and injustice. The stories range across systemic racism, illegal immigration, mental disability, and hate speech.

Even the stage manager, Grace Ortega, wheelchair bound, comes front and center to tell her story. The girl, always needing help, ever the charity case, decides she’s had enough. No longer is she going to accept that she cannot be center stage. Her chair and her attitude, free her to go places. In “CSU Ferguson,” Ortega takes the spotlight.

With a set lightly resembling a BART Station complete with graffiti, yellow danger lines, and a bus stop bench, the play is driven by the players, their experiences, and passion.

Even though the choreography sometimes stumbles and a few props malfunction, these small opening night jitters give way to intense emotional impact. The play had me crying, frustrated, joyous, impatient, confounded, and feeling a great sense of welcoming and understanding.

“CSU Ferguson” begins as a collection of loosely related scenes with a heavy slam poetry influence. Despite the title, the shootings at Ferguson play a minor role. We get to see the heartfelt personal stories of the players themselves, many written by the performers. As the actors draw us in, the show becomes much more.

“CSU Ferguson” provides a stage for those oppressed, those looked down upon, and those ignored. On the CSU East Bay stage, they share their stories, their pain, and their inner lives.

We hear three mothers lamenting the pain of not knowing whether their children will come home tonight. We watch April Helen Ballesteros and Alejandra Rosales, Mexican immigrants, decide whether they would rather be shot by I.C.E. agents or be slaughtered in their home country. Kimane Juneau asks us to hold our hands in the air until they are sore, in order to identify with the Black man held at gun point by a cop.

Nekia Prescott pitches a movie that begins with a little Black boy playing on a bus with a toy brontosaurus. Although a pterodactyl poops on a police car and dinosaurs roam the streets, the little boy survives, avoiding a familiar fate. And, in an eloquent poem, Jalen Francis and Sid warn us against Black culture’s frequent use of racial slurs . These personal touches provide us with an invitation into the souls of people who have experienced a pain foreign to many of us.

If we choose to accept the students’ invitations, our hearts will open and help us understand the pain of modern America.

“CSU Ferguson” gives us the impression that everyone is welcome, all races, sexual orientations, and abilities. The actors ask us to look around at the few uncomfortable white people in the crowd. For myself, the play elicits a guilt for crimes of the past, even though I was born in Eastern Europe in poverty.

The annual production has expanded over the past few years from ten to over thirty players. People come to see the show and are so drawn to it that they feel they must join their voices to the chorus. CSU students’ stories carry us away—using dance, poetry, and dramatic scenes.