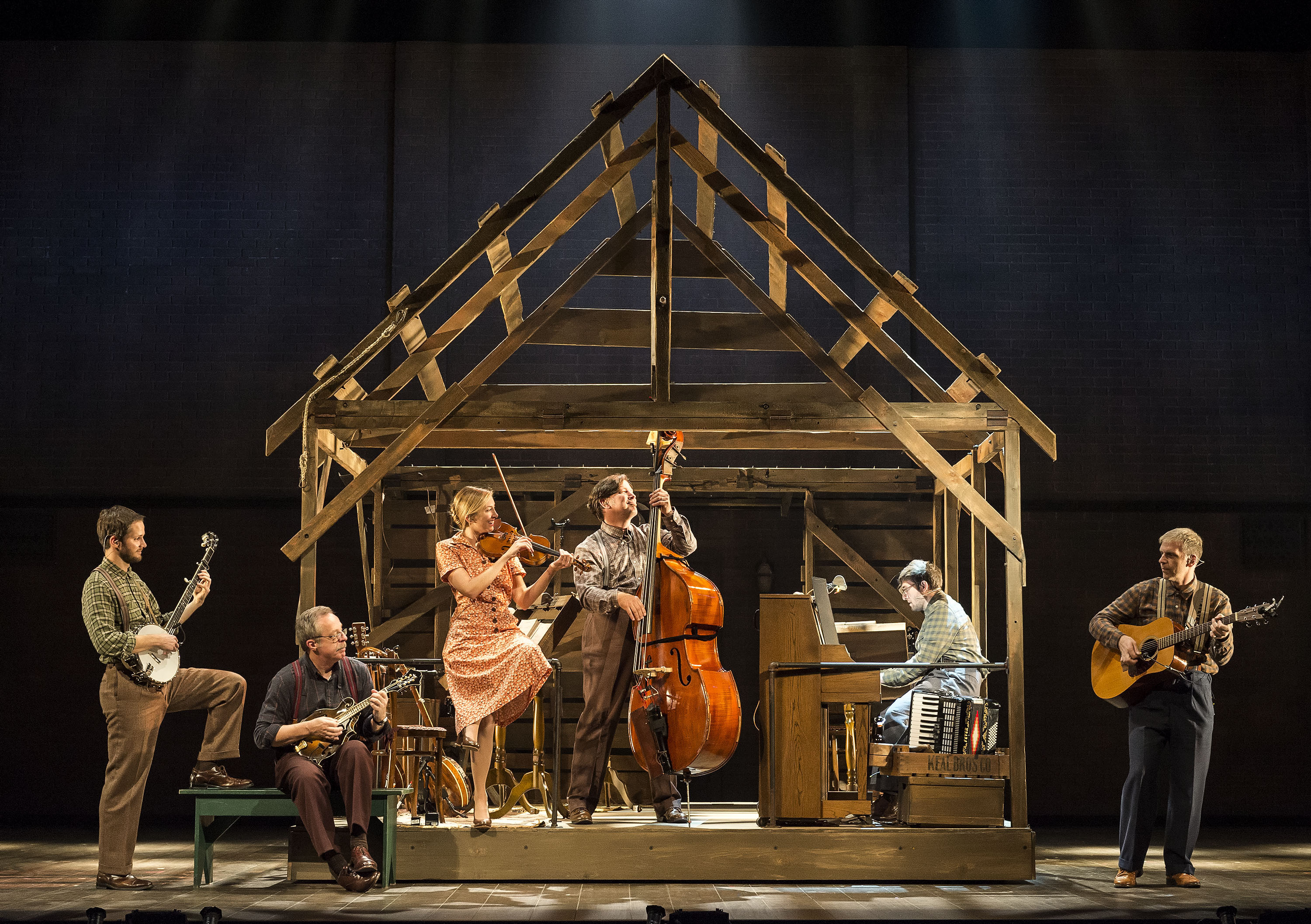 “Bright Star” celebrates U.S. pride in Deep South music and culture. The Tony-nominated musical, now at The Curran Theater, showcases Steve Martin’s playful comedic style with dynamic dialogue and love for the banjo. In this musical, the book outshines the music. The show begins with the whole company singing “If You Knew My Story.” Each character, intent on following her or his own bright star, seeks light in the midst of social cruelty and limitations.

Alice’s rigidity stems from “the worst day of her life,” 20 years ago.  Flashbacks to 1922, reveal Alice as a teen-aged girl, free spirited and in love with Jimmy Ray Dobbs (robust Patrick Cummings).  But their sweet romance comes to a screeching halt when Jimmy Ray’s father, Mayor Josiah Dobbs (devilish Jeff Austin), commits an unspeakable crime, reeling us into horror. My jaw dropped as the lights went up for intermission.

Edie Brickell’s lyrics capture the essence of country music in “Please Don’t Take Him.” And Jimmy Ray melts to the floor as he sings “Heart Breaker.” The skillful acting ensemble brings Brickell’s lyrics to new and thrilling life.

At first, Act One lacks high stakes and I hesitated to get on board. I figured Black people were probably being lynched on a tree an acre away. Instead, “Bright Star” gives us a microscopic point of view, zoning in on a small subset of the South. However, by the end of Act One, I realized that Mayor Dobbs’ oppression of the young lovers represents everyone’s struggle against unjust authority—then and now. Steve Martin’s ingenious word play and unique humor save the day.

By Act Two the musical compositions begin to sound similar, except for one. What’s a country musical without a song about alcohol? By the time newspaper worker Lucy Grant (sprightly Kaitlyn Davidson) sings “Another Round,” we feel like joining the Do-Si-Dos in the local bar. Lucy and the company dance beautifully across bar tables as they demand more whiskey.

Oh yes, I love the set changes! Even the changes have rhythm, as the ensemble gracefully sets down chairs and tables to the beat of the orchestra. Josh Rhodes brilliantly choreographs the transitions so that they enthrall and take us by surprise. Before we know it, a backdrop appears, taking us to another part of town. In one hypnotic scene, veteran Billy Cane and his crush Margo Crawford (melodic Maddie Shea Baldwin) freeze, while the rest of the cast physically rewinds them.

The Honky Tonk and Bluegrass music blow our minds. A tiny floating wooden cabin holds a six-person orchestra complete with  fiddle, guitar, and banjo. The music, pleasantly odd, had me slapping my knees and clapping along with the cast.

“Bright Star” tells a story of discovery because the characters are searching for a path to redemption. Adult Alice Murphy’s office henchman Darryl (sarcastic Jeff Blumenkrantz) charms us with dark, self-deprecating humor, something like Sheldon in Big Bang Theory.  When Darryl is asked if a guy is cute, he claims he cannot tell. We pause awkwardly before erupting with laughter at the shadow of gay repression from 1945. This obvious revelation strikes a funny bone, as we juggle three clashing time periods: the 20s, 40s, and the present day.

With high energy, superb acting, and witty dialogue, “Bright Star” calls upon us to remember our origins.