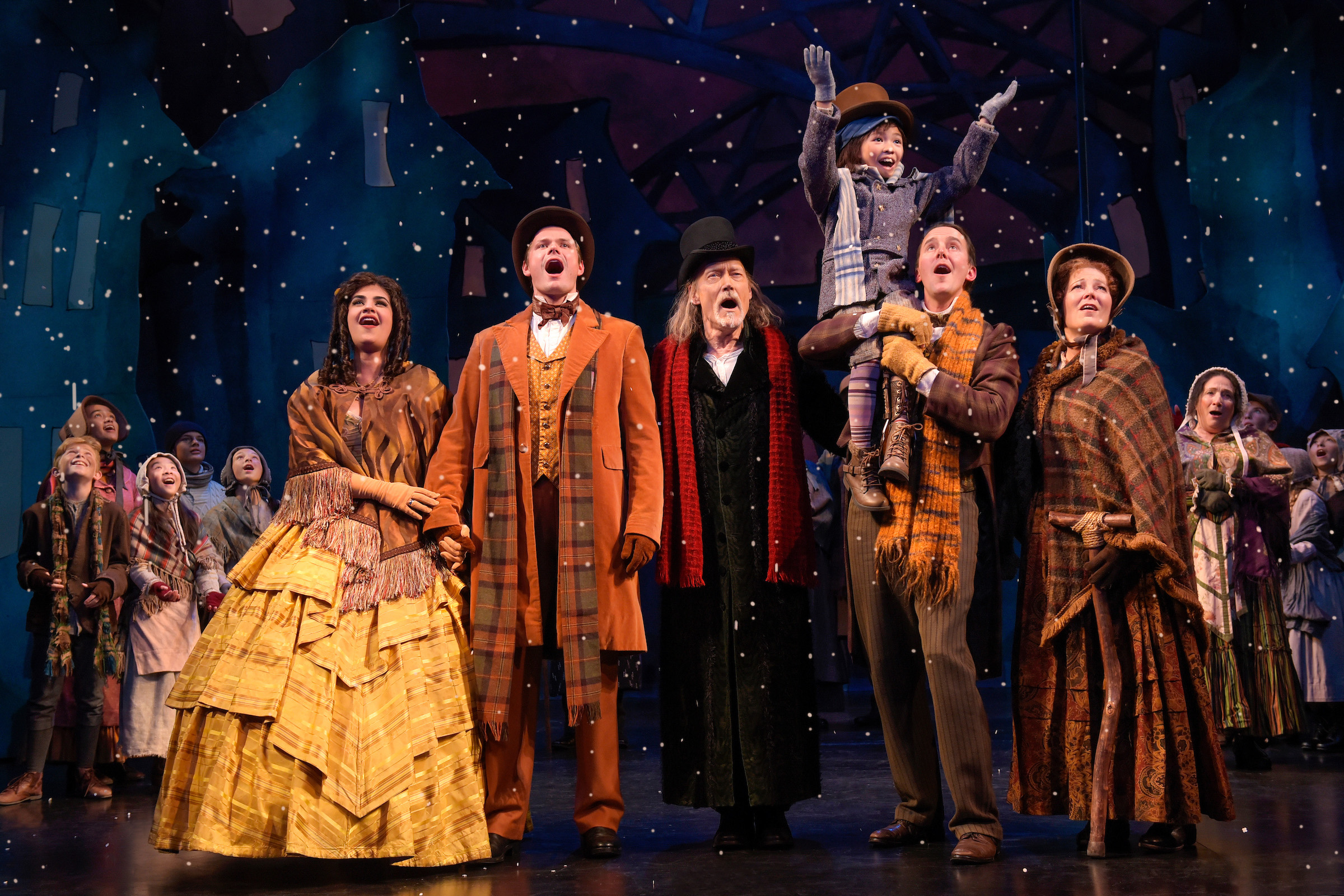 As San Franciscans talk more about mindfulness, “A Christmas Carol” comes to A.C.T. to remind us about Time and Ghosts and Empathy for others. Charles Dickens’ essentially mindful tale virtually creates the idea of Christmas.  Director Domenique Lozano depicts an ultimate change of consciousness in her moving production of Dickens’ classic.

When Victorian protesters and caroling children brandish signs saying, “Tax the Rich,” we must think about the Scrooge-like Tax Bill in Congress. Scrooge seems to be in charge in the U.S., as inequality keeps growing. We. too, are desperate for social justice, like Dickens’ England in the 1800s. San Franciscans would like a change of consciousness—like Scrooge’s slow realization onstage.

Time permeates Lozano’s production, with clocks and echoing chimes, as Scrooge and his partner, Jacob Marley look fondly at their watches. Time flies swiftly by, while Dickens’ transports us to Christmases Past, Future, and Present. As Scrooge, Carpenter shivers in the glacial chill of the miser’s bedroom. When the Ghosts come to visit him, Scrooge sees his life go by, in magnificent and spooky scenes that enchant us, magically.

The visiting Ghosts always show up at night, when we are more vulnerable. Scrooge, alone, stays angry with the people who want to give to the poor. Caught out off guard, Scrooge’s Ghosts come to awaken him to change and charity.

Scrooge refuses to give to charity. Mrs. Dilber (vivid Sharon Lockwood), Scrooge’s housekeeper, trembles, as she begs her boss for the day off.  But something changes when Scrooge sees her collecting his belongings. He realizes with a shock that has died!

Scrooge wants only “money, money, money,” repeated by the choir singing those words at him, a tune that remains with us for a long time. But can human beings change?  In the first part of the play, Scrooge is blind to the obvious, to love and feelings and generosity.

Ken Ruta, the Ghost of Jacob Marley, carries the heavy, oppressive chains that we build around ourselves. But later, the tour through his Past and Present stir up Scrooge’s hidden good nature. And we, in the audience, shift with him.

We also avoid seeing the suffering around us, in the streets of San Francisco. But at the end, Scrooge figures out how answer the question: “What do you do with your wealth?” He responds with generosity: the turkey he gives to the Cratchits, the raise in pay to Bob, the ring to Mary, the money to Mrs. Dilber, and Christmas Day off, and gifts to charity. The old story lifts us up, again.

Scrooge’s third Spirit does not talk. This Ghost roars with silence,  more powerful on the vast Geary Theater stage than mere words. Scrooge realizes his looming fate, and we see his change in James Carpenter’s face and body.

When Scrooge wakes up in joy, he is lost in a newfound realization. We wake up with him. Like the magnificent enlightenment onstage, we are inspired to reshape ourselves and our world. What a great gift to all of us.

As Tiny Tim Cratchit says, “God bless us, everyone.” “A Christmas Carol” is A.C.T.’s gift to San Francisco and the show is always new and moving—don’t miss it.