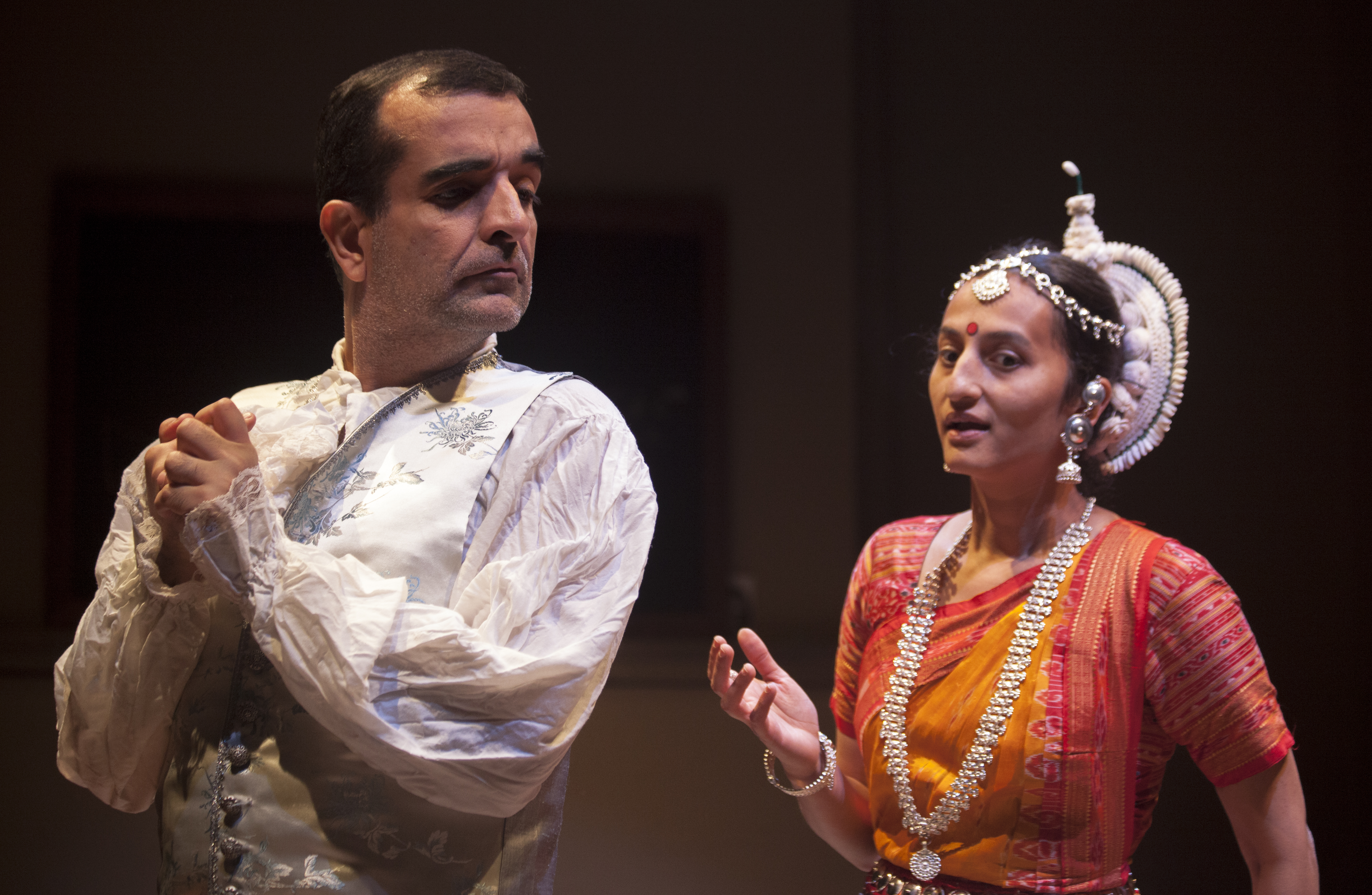 by Svea Vikander and Edward Boyda

“Partition” is not a play about math. Director Bruce Coughran has made mathematics into a language and a backdrop on which to tell the story of the relationship between the brilliant Indian mathematician Srinivasa Ramanujan (Heren Patel) and his mentor, British professor G. H. Hardy (Alan Coyne).  A shared obsession and tenderness draw the uptight Hardy and spiritual Ramanujan together, even as culture, colonial power, and mathematical method drive them apart. Their story brims with the energy and grief of a romance.

In 1913, the young Ramanujan writes to Hardy at Cambridge. Until that point the budding mathematician had passed in and out of Indian university life, tutoring and working as an accounting clerk. Hardy sees the brilliance in Ramanujan’s theorems, and arranges for him to travel to Cambridge.

“Partition” shifts us back and forth between Madras and Cambridge, and from dreams to apparitions. Installed in the Berkeley City Club’s chapel-like parlor, the simple set consists of two platforms, a desk, and a bench, on which Ramanujan sleeps in hopes of being visited by Namagiri, his goddess of numbers.

Namagiri (Avanthika Srinivasan) holds her own in brief interludes of dance and song, and then retreats to watch over the action with looks of maternal exasperation. She takes a liking to Ramanujan when he arrives at her shrine, dehydrated after days of walking. His self-sacrifice continues in Cambridge, driving him to the edges of physical and mental health. Although his persistence inspires her love, Namagiri chastises Ramanujan for needless self-neglect in the service of mathematical discovery.

As the only female character in the play, Namagiri receives both infantile supplication from Ramanujan and aggressive sexual desire from the ghost of Pierre de Fermat (Marco Aponte), the 17th Century mathematician. She tolerates Fermat’s harassment because she wants him to spill the secret to his final unproven theorem. It is dispiriting to see stereotyped French aggression played for laughs, but Namagiri maintains her equipoise.  The goddess is more grounded than any of the mathematicians.  She also wears excellent sparkles.

The level-headed goddess has a Cambridge counterpoint in Professor Billington (played with humanity by David Boyll).  In the play’s most compelling scenes, Billington calls his friend Hardy to task for his coldness and his sadistic drive for mathematical rectitude. Ramanujan works himself to sickly, skeletal form trying to please his exacting mentor.

Gazing at Ramanujan’s work, his trademark numerical identities scrawled on surfaces around the theater, we were struck by its outlandish quality.  Infinite series of fractions, each made up of successively longer products of evenly-stepped integers, magically add up to pi.  Other series, involving exponentials of pi times square roots of natural numbers, likewise lead to impossibly simple sums.

How or why would Ramanujan think to write these equalities, what intimations of structure set him on the path, what blind alleys caught him, what nuance of arithmetical form finally hinted the way through—all lie beyond the ken.