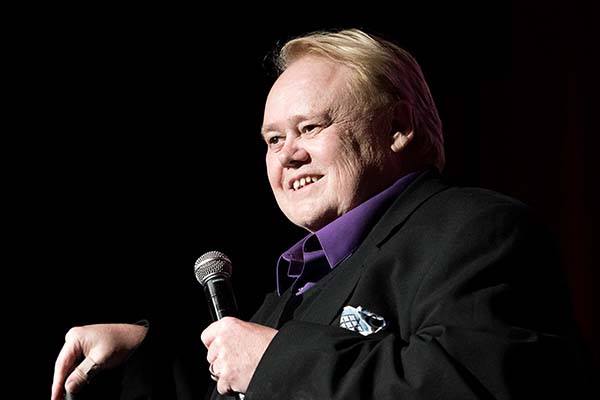 In his solo show “Dear Dad,” comic Louie Anderson, a two-time Emmy Award winner, uses his unhappy childhood as a call to action for America. The comedian gives a shout out to all ethnic and social classes. Ranging from his grunting alcoholic father who calls him a “lard ass” to a mother who compulsively steals, Anderson tells stories of his funny but poverty-stricken past: he grew up in the Projects of Saint Paul, Minnesota—number ten of eleven kids.

Living a pretty meager existence, Anderson recalls being thrown into jail for selling a stolen snowmobile, and dropping out of high school—always with humor and scary stories. With the help of his probation officer, he manages to graduate. But his father belittles him, accusing the boy of trying to be “a big shot.” Anderson’s wildly funnty stories—his father drives them into a snow-filled forest—calls upon us to create opportunities for those less fortunate. He emerges as an inspiring example of one who restructures his life for the better—with good humor.

Louie Anderson engages intimately with us while recollecting a challenging boyhood. After some sneezing in the audience, Anderson says, “Bless you” and “Hope you enjoy the show.” Even now, his childlike innocence encourages hearty laughter and empathy.

Anderson’s presence on stage and respect for his unfortunate family inspires respect for him. As a Filipino-American, family means everything to me and to see him express those same sentiments for his imperfect family demonstrates, with laughter, that family counts, no matter how dysfunctional. And a dash of humor and humility helps. His final remarks still resonate with me, when he tells us to spend lots of time with our loved ones before it is too late.  Like Anderson’s father, my mother suffered through a stroke, when I was 14 years old. Anderson reminds us all that life is too short to waste precious time.

The charismatic Anderson projects on his “Mom’s Rules to Live By” and his own “Rules of Survival” onto a big screen. Three statements stand out:

As a Cal student, the first two strike a deep chord. I have a hard time trying to balance living up to my parent’s expectations while pursuing my own interests. It’s difficult to acknowledge one’s own success and self-worth, as Anderson points out. With these insights from Anderson, onstage and in his book, we realize that resilience and strength help overcome the obstacles we face.

The deliciously expressive Anderson’s comedy convinces us that compassion can defeat selfishness, even under an administration that attacks its own people. Anderson shows that empathy helps struggling youth to see their self-worth, empowering him and others to offer love, freely. With humor on his side, Louie Anderson spreads the love that is so much needed.