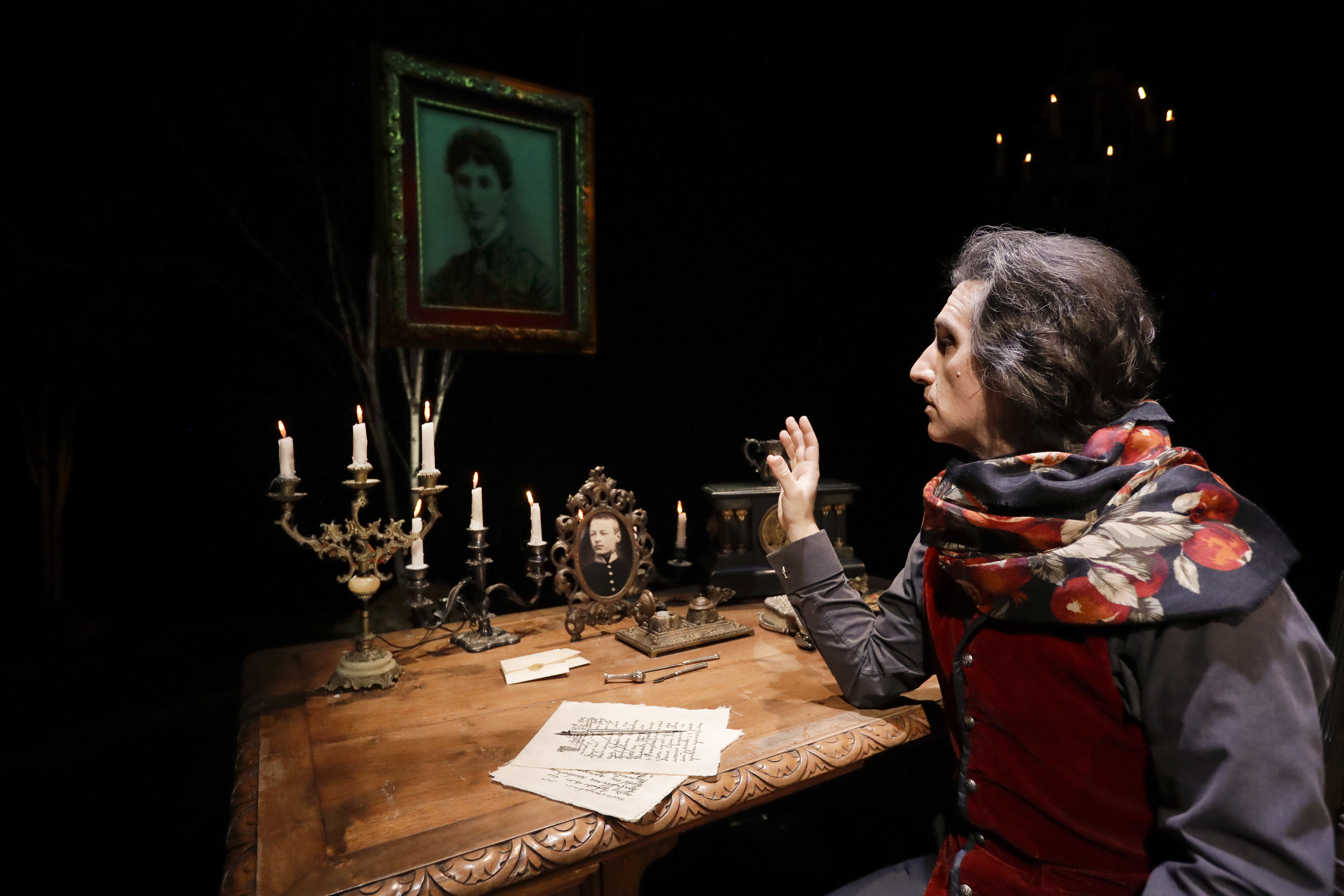 Hershey Felder has come to Theatreworks to embody Tchaikovsky. When Felder, as Tchaikovsky, plays for the Opening Night of Carnegie Hall in 1891—at the request of Andrew Carnegie—we feel a shiver of excitement. New York finally celebrates Tchaikovsky as a musical genius, even though he was scorned in Russia.

Under the Czars in the 1800s, Tchaikovsky was pursued, blackmailed, and threatened with prison, if word leaked out that he was gay. What a cruel irony that the Russian government, today, says that Tchaikovsky is their greatest artist. But they still refuse to admit he was gay.

Felder’s Tchaikovsky is shy and melancholic, as the isolated composer struggles with his “disposition.” Although Tchaikovsky never utters the word “homosexual,” he has a series of intimate friends, beginning at school. He has a special fondness for his brother, and for his nephew “Bob,” too. And the elegantly framed portrait over his desk changes the face from one friend to another. Felder re-enacts them all–teachers, patrons, brothers–with fluid ease.

Felder both acts and plays, showing how each piece arises from the composer’s life. Each musical work emerges from personal, political, and historical events. It’s a revelation to follow Tchaikovsky’s unfolding musical genius, as Felder re-lives them.

Hershey Felder, as the great composer, makes himself shy and sensitive to every insult that poor Piotr endures. Piotr Ilyich Tchaikovsky leads a secretive, repressed life, even as a child. His father forces him to go to law school, inflicting loneliness on the boy. But he finally gets admitted to the new Conservatoire de Musique, back in Saint Petersburg, where he thrives, their first and most important student.

For many years, the critics reject his groundbreaking music, but the public loves his forceful and bombastic style. “The 1812 Overture” becomes a people’s favorite, with its cannons and chimes—even though Tchaikovsky hates that piece.

At the beginning of the show, Felder reads us an invitation he recently received from the Russian government. It’s an amazing invitation, since Russia still denies their great composer was homosexual.

The show flies by like a dream, with magnificent projections that shift and move: from swaying birch forests with flying birds, to cathedrals and concert halls, to grand ballrooms and Russian parlors. And in the center, the beautifully costumed Felder portrays the touching life of the alienated genius in Czarist Russia.

Hershey Felder’s nimble hands fly over the keyboard. He plays excerpts from “Swan Lake,” “The Nutcracker Suite,” and “Sleeping Beauty,” embedded in the ongoing life story of the composer: a masterful performance.

Hershey Felder brings a whole world and a tragically short life to the stage, ending in the mysterious death of the composer—an unsolved mystery, at the height of his powers.

To witness Hershey Felder’s “music-drama” is both a thrill and an honor. We have seen his magnificent shows depicting Beethoven and Irving Berlin at TheatreWorks, as well. Felder never disappoints.