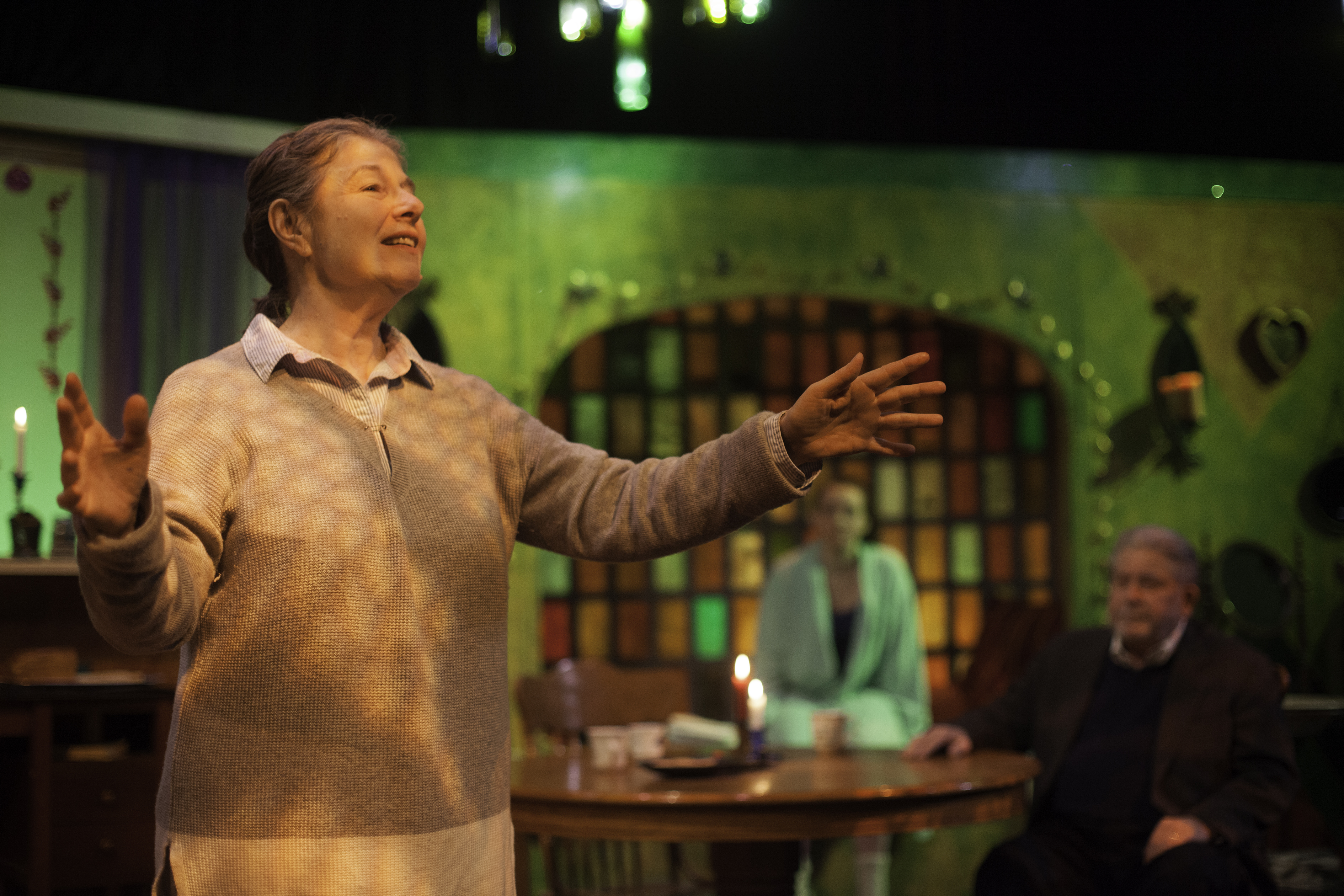 I couldn’t stop staring at the marvelous room on the stage as I waited for the play to begin. The vividly painted green and gold walls actually sparkle. Curious objects are scattered around, one small delight after another. The stage invites us in—not to an artist studio, but a home.

Elderly Helen Martins, an Afrikaner widow and artist, lives here in the remote South African desert, in 1974. Two people visit Helen: Elsa Barlow, a young teacher visiting from the city, and Marius Byleveld, the old Afrikaner reverend of the town. Helen, Elsa, and Marius relentlessly challenge one another and themselves, with their conflicts exploring: What nourishes an artist’s imagination? How do people of color and women find courage to face oppressors? Does aging oppress as much as authority? What is faith? How much does love depend on trust?

When young Elsa comes to visit Helen, a clash is inevitable. Elsa’s abrasive city ways, and her torment over South Africa’s toxic apartheid allows her no peace, even if her messy personal life was in order.  However, their impossible friendship thrives on shared values of independence and courage. The two women’s difficult and fascinating friendship proves to be both honorable and sweet, and a joy to witness.

Neither woman fits in. Helen’s provincial rural town expects a widow to draw the curtains and close the shutters. Instead, Helen becomes a sculptor, creating an astonishing world from her imagination. Her neighbors see her as eccentric, at best—or, a mad idolater, at worst. Elsa, an anti-apartheid feminist in the South Africa of 1974, faces ominous, bureaucratic enemies.

And the reverend Marius…is he, as Helen believes, a true friend, lovingly concerned for her welfare? Or is he, as Elsa believes, a dangerous schemer? Marius gradually opens up to the women, which surprises him as much as them. Playwright Athol Fugard provides no easy villains or answers.

Unerringly, Diane Tasca as Helen and Briana Mitchell as Elsa shape sharp characters who debate tough issues. Tasca, who founded the Pear Theatre in 2002, and recently retired as Artistic Director, creates an irresistible Helen. A complex, timid, and sensitive artist, when she finally proclaims  in joyous abandon the source of her art, she dazzles her visitors—and us.

Brash Elsa, with her predictable opinions, could easily lapse into a stock figure; but Mitchell keeps her human, and us caring about her. John Baldwin makes Marius formidable, an uncompromising preacher, ill at ease when forced to question his beliefs and personal feelings.

Fugard loosely bases the character of Helen on the real Helen Martins, whose home is now converted to a museum in South Africa. Scenic Designer Ting Na Wang manages to sneak in some of Helen Martin’s real designs on the floor through light and shadow. Remarkable.

Freedom feeds the artist. Fugard’s tale of one human spirit finding her path will nourish those who make the journey to Pear Theatre. That’s a special gift in these times of lies and bigotry.