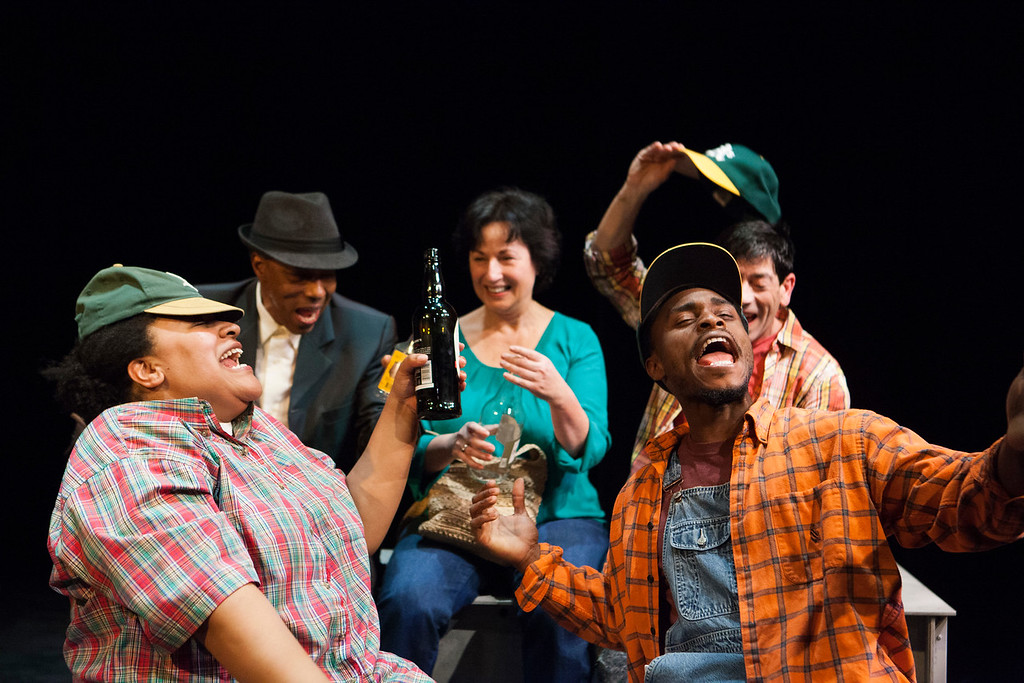 A Spellbinding Journey, Unadulterated and Moving

Ominous jazz music hints at danger, vaguely threatening figures creep in, bent over, shadowy, in a parade choreographed for menace not beauty. A woman asleep in the foreground wakes up, disoriented, then recognizes her surroundings: Detox Ward.

She, Carlotta (sardonic Jeri Lynn Cohen), proceeds to describe the Detox experience, honestly, brutally, hilariously. Since she is the only woman in the Detox Ward, Carlotta inspires gallantry. All the patients get Nembutal at night, so that’s something to look forward to, daily.

Cohen also plays Emergency Room clerk Lucille, who offers pointed comments about good versus bad suicides. Cohen also plays Mrs. Bevins, battling desperately to hold it together as a drunken mother of four. Later, she builds a sober life in Boulder, Colorado, and finally, teaches writing in a Los Angeles County jail to addicts and alcoholics. You don’t need to be an English major to figure out all these women are Lucia. After her death, one of Berlin’s sons said, “Ma wrote true stories, not necessarily autobiographical, but close enough for horseshoes.”

Seven ensemble actors ably bring her worlds to life; each playing many roles. Indiia Wilmott’s magnificently awful Migraine Marlene brings down the house; I just pray I am never behind Marlene in an ER line. Wilmott shocks us, later, with her portrayal of young women inmates who reveal the cruelties they survived.

Ryan Williams French plays CD, a handsome young inmate doomed by gang warfare, who breaks our hearts. Delia MacDougall’s unashamed Dixie, a woman who patiently waits to return to her life of crime, is a stand out.

Phil Wong has a wide reach: he plays honest, patient Officer Wong of the Oakland Police; an ailing Chinese matriarch Mme Y; and a Trans inmate. I love Officer Wong, it’s good to be reminded cops like him exist.

Berlin’s drunks are complete human beings, so it’s no surprise that Norman Gee’s sympathetic drunk sticks with me. Even more than Charles Bukowski, Lucia Berlin shows the camaraderie among street rummies. Despite the disorder in their lives, their world includes warmth and humanity. They prove worthy of respect.

San Francisco’s own Marcus Shelby, composer and bassist, composed a wonderful score to accompany these stories, well worthy of this fine production.

I saw “Lucia Berlin: Stories” with a friend who announced, passionately, she enjoyed the show. When she said nothing more, I asked, “Why?” She thought a moment, puzzled herself, and then decided, “She’s authentic.”