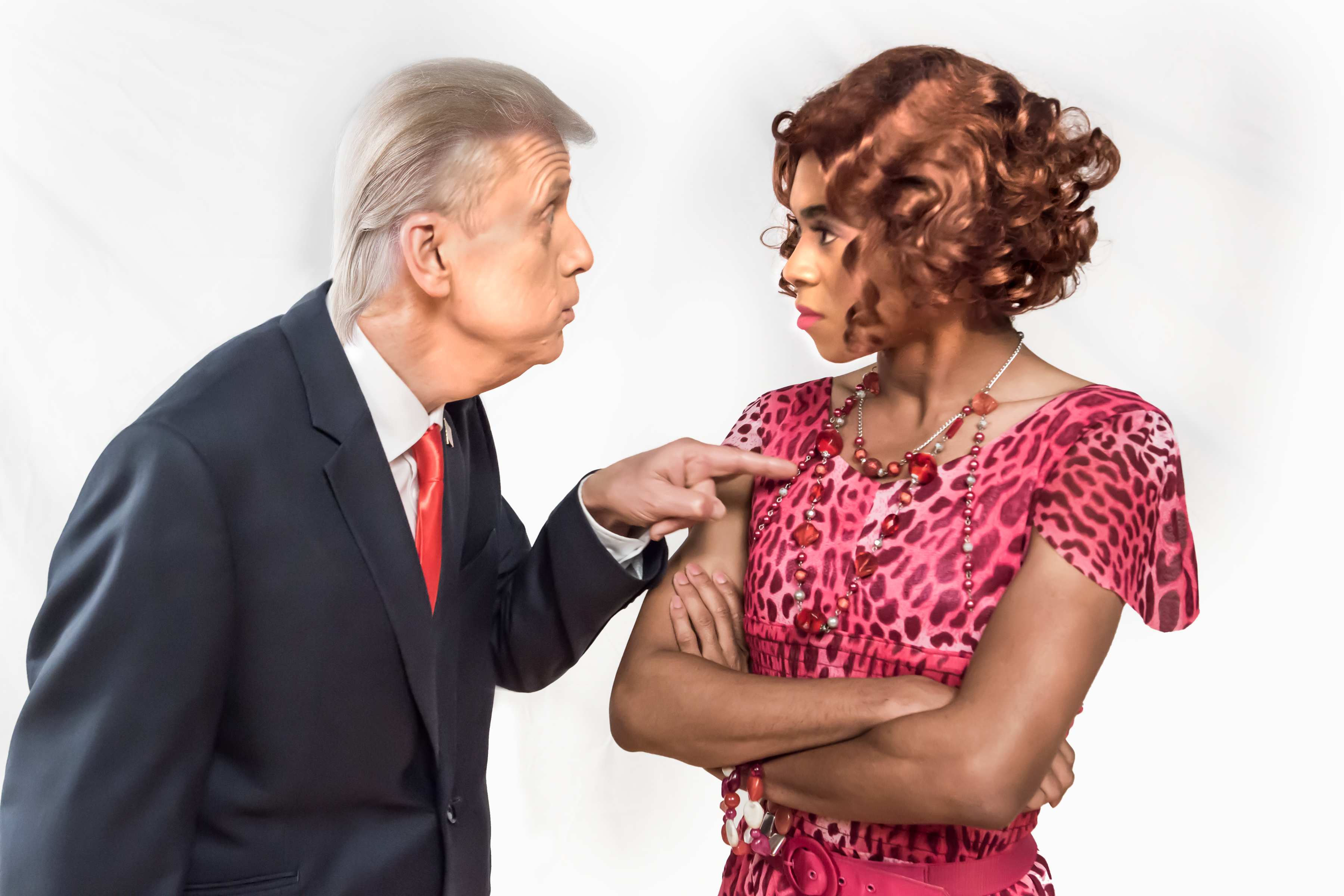 In John Fisher’s no-holds-barred political satire “Transitions,” disruption rules the day. Fisher, himself, always the supremely talented actor, plays three roles—including Drumpf and Putin. Fisher, in bathrobe and with cheeseburger, pouches out his cheeks and lips in delicious imitation of you know who. His body and movement embody the ridiculousness of our current Strangelovean Hell.

Each actor does brilliant double and triple duty to bring a Saturday Night Live touch to the soap opera that springs daily from the headlines. Fisher’s satirical take on U.S. antics strikes home, hitting the target with wit and wisdom.

Pretty soon, Ruby is on a plane to Moscow to represent the U.S.—on a spy mission for his doofus boyfriend in the White House. But first, he talks to Melania (seductive, brilliant Katie Rubin), and they become BFFs.

Fisher’s “Transitions” is peopled with hilarious characters like the rigid, forbidding White House assistant Dalanka, played by the versatile and mesmerizing Kathryn L. Wood. Whenever Wood is on the stage, she rivets our attention to her caricature of a scheming civil servant. Whether she’s playing an American toady or Russian boot-licker, Wood creates detailed characters with natural comic ease.

Among the other White House hangers-on, the irrepressible Katie Rubin plays Melania, hilariously, dressed in stylish white suits and Vogue fashions. Rubin steals scenes with her sexy Eastern European accent and a self-satisfied smirk. As Melania, she prances around her husband, swatting away his roving hands to avoid any sexual contact. We know who rules that roost.

Ruby sings great drag numbers with rare talent and verve. In her tight-fitting red dress with knee high red velvet boots, she brings down the house. In Moscow, Ruby gets literally tied up with Vladimir Putin, perfectly played by the irrepressible Fisher.

As Vladimir, Fisher make delightful fun of the cheerless, conspiratorial Russian, who constantly obsesses over his opponent Drumpf. And wouldn’t you know, Putin’s wife, Lyudmila, emerges as the voice of Russian reason and spycraft, played by the hypnotic Katie Rubin.

We leave the newly renamed Gateway Theatre with a lighter step, knowing that a sharp-edged comedy and satire like “Transitions” can launch laugh bombs high into the sky, raining joy and jokes over the wondering world.