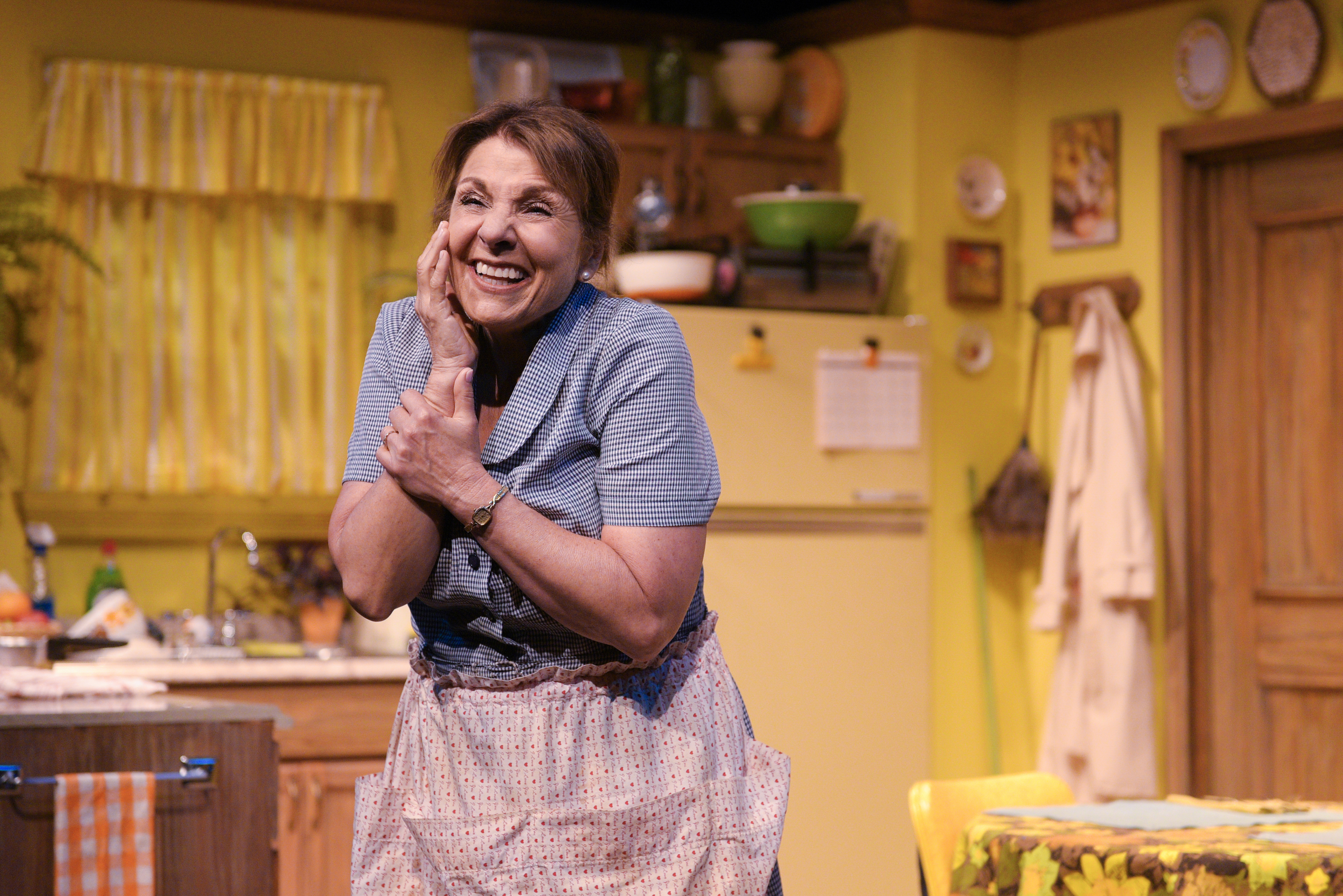 Shirley Valentine (delightful Kerri Shawn), a 52 year old Liverpool housewife, is facing an empty nest and talking to the wall. Every morning, she makes chips and eggs for her husband, cooking and cleaning until Joe comes home from work. She does the same chores every day, like clockwork, having raised two kids, who now live on their own. How would you feel?

In 1986, Willy Russell created a classic British housewife who feels she has completed her obligations as mother, and, yes, as wife, too. Kerri Shawn reprises her role at Center REPertory, under the brisk and witty direction of George MacGuire. Kerri brilliantly embodies a not-to-be missed Shirley for our time.

With so much life left, Shirley questions how this trivial rut has become her daily routine. Her marriage feels spiritless and dry; the organic love and chemistry that she used to feel with Joe is gone. Her husband is gone. Fights are predictable and unavoidable. Even the words “I love you” have become nothing more than an instinctual excuse, spoken just before causing harm.

Besieged with anxiety, Shirley announces,“Marriage is like the Middle East… there is no solution! You treat the problems as they flare up, but for the most part you just duck and cover and hope that the ceasefire holds!”

Her kids seem so hip! They have discovered 80s wonders: Keith Richards, marijuana, the clitoris, cafés, and Art School–those kids sure know how to live!

In her desperate, middle-aged desolation, Shirley Valentine can only fantasize about returning to her adventurous, punkish youthful days. She remembers fondly skipping classes, disobeying dress codes, and frustrating the headmaster.

She remembers grade school: “On me report card, me teachers said I wouldn’t venture very far, and based on me marks in Geography if I did, it’d be because I was lost!”

When an old friend unexpectedly invites Shirley for a two-week vacation in the Greek islands, Shirley’s anxieties run rampant.

What would the neighbors think? How would it look to her children? Would they think she’d left to have an affair? How would her husband survive without her cooking? Does Shirley DARE to go to Greece? This could very well be just the change she needs. Shirley leaps from her daily routine of selflessness to some well-deserved pleasure, enchanting us with her newfound spirit of adventure.

Shirley Valentine explores what it means to live your best life regardless of age, class, or gender. We all are given only so much life to live, so why not live it all? Shirley Valentine says, “Be careful, many of us quit livin’ long before we die!” She embarks on a journey of the body, mind and soul–and her wildest dreams are fulfilled.

Willy Russell has given us a comic masterpiece with the endearing charm to stand the test of time. Kerry Shawn beocmes Shirley Valentin–superbly, passionately, and with great humanity. Don’t miss Kerry–she’s a star in our firmament.