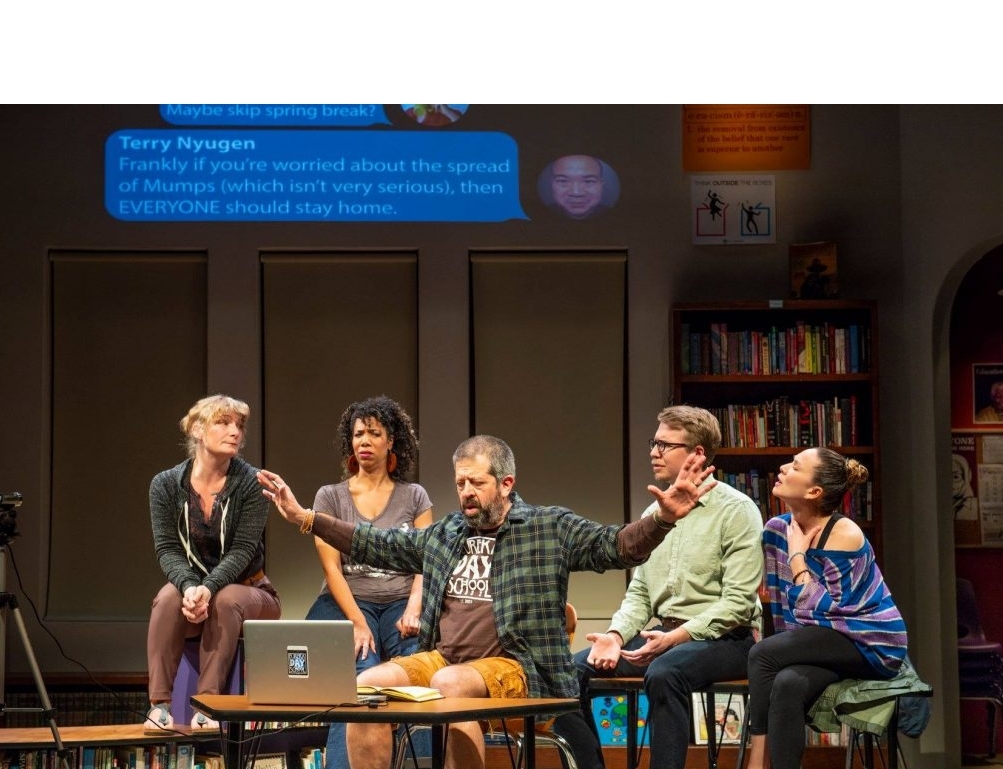 Every aspect of “Eureka Day,” performances, costumes, and visuals, shines like a new day. Audiences are laughing out loud at the incredible, artful scene of a Facebook discussion, involving all the school’s parents, as their pictures and comments are flashed on the walls of the intimate Aurora space. Hold on to your chair because those quips escalate like lightning and get nasty, fast. Funny as Hell!

That’s what happens when a bunch of super nice private school parents under threat of a mumps epidemic at swank Eureka Day School get embroiled in debate over mumps vaccination. Vaccination! The very word brings Anti-Vaccers, parents opposed to vaccinations, out of the woodwork. They are here, among us—I have met them, over in Temescal.

Yes, the Anti’s do invite kids over for Mumps Parties or Measles Parties to infect other kids. All because of lies about vaccination spread by a British doctor years ago, since disgraced. Yes, California laws have been passed recently, requiring vaccination for all public schools, to provide “herd immunity.”

At Eureka Day School, in a town not unlike Berkeley, parents try run their small, private school by an Exec Board of parents who make decisions by “consensus.”  You can imagine how that works when the mumps breaks out. We get to witness the Anti-Vaccer parent on the Board pitted against the pro-vaccination parents. Wonderful fun.

Director Josh Costello choreographs the five actors who play the parents on the Board.  Hapless bearded Head Teacher (enthusiastic Rolf Saxon) hilariously tries to squeeze “consensus” from his warring members. Turns out consensus is a code word for squelching other people’s arguments. Consensus, here, is comedy magic.

The Board meets at small tables and chairs, with elegant wide windows that show a magnificent Berkeley Hills view. The pinkey-bluey Bay sunset from the hills is on spectacular display, beautifully rendered.

All the actors brilliantly embody private school parents, each with a tight grip on brilliantly realized and amusing characters. Elizabeth Carter’s Carina, a new member, is touching and heartfelt—she walks on eggshells, ever so subtlely. Charisse Loriaux’s hesitant and needy Meiko has several irons in the fire, playing her hand, superbly, too.

Bouncy, intrusive Suzanne (passionate Lisa Anne Porter) squelches others with grand comic effect. And self-absorbed Eli (impressive Teddy Spencer) bursts out and cleverly lords it over the others. Each one is a hoot, and glorious to follow.

Director Josh Costello deserves a Tech in Comedy Award for composing a symphony of visual effects and perfect choregraphy that jibe perfectly with his spot-on actors. “Eureka Day” is a delight. Spector’s play tells us all about ourselves. “Eureka Day” is one play not to miss.