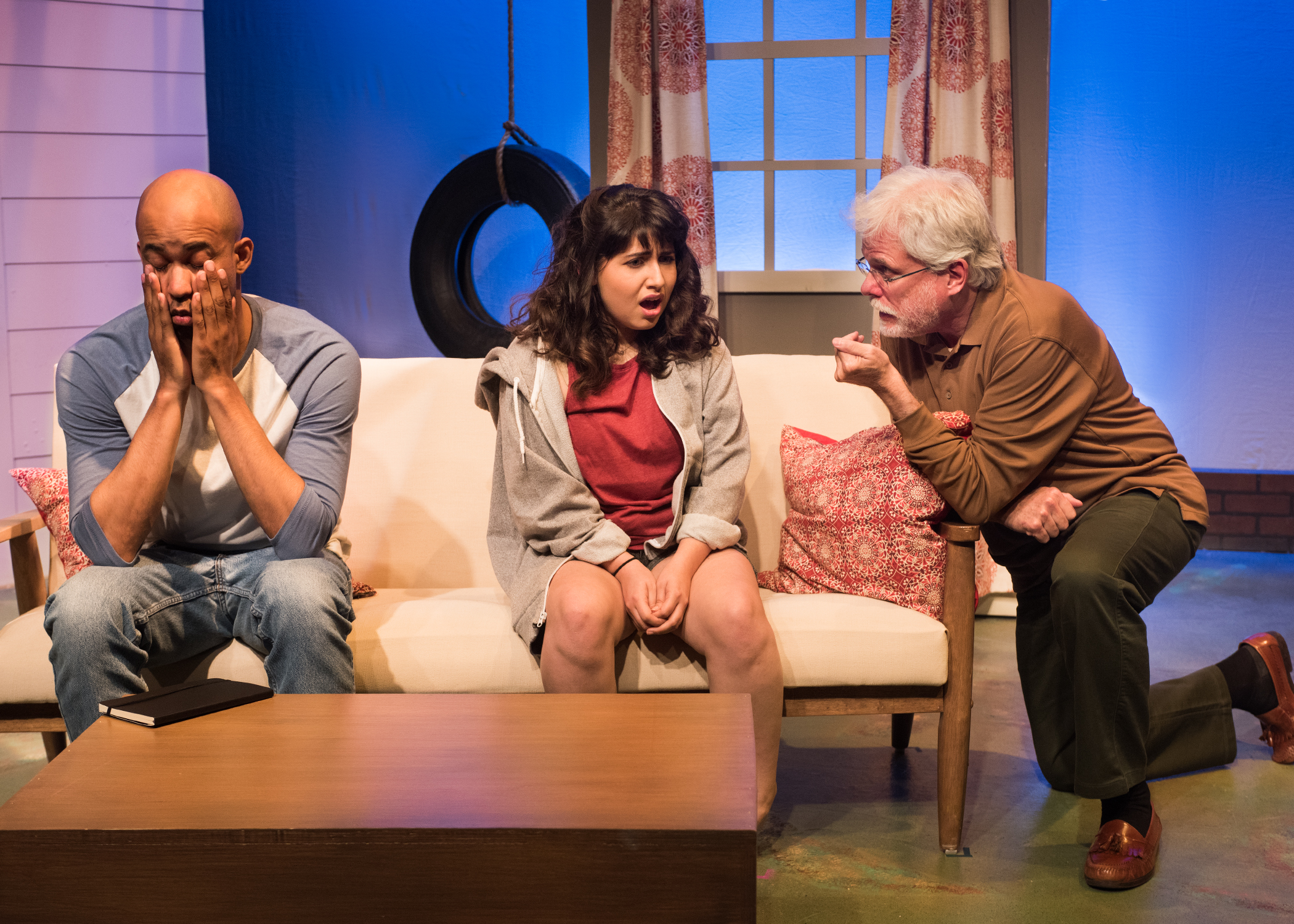 In “The Mystery of Love and Sex,” daddy’s little girl Charlotte (bouncy Linda Maria Girón) and her troubled friend Jonny (thoughtful Kenny Scott) have been dear friends ever since grammar school in their southern town. Now, they co-habit away at college—oh! no sex–not part of the deal. Charlotte would love to get it on with her best bud, but Jonny ain’t goin’ there. We begin to suspect that one or both may be gay–or what passes for gay in college.

Director Rebecca Longworth highlights the comic conflict between Jews and Christian, young and old, Black and white. Playwright Bathsheba Doran channels these conflicts into the young platonic friends, Charlotte and Jonny, as they struggle with their sexuality. They have settled into their dorm room like old marrieds and try to make dinner for her parents. They serve a funny, bohemian style, sit-on-the-floor, no-heat veggie dinner. But her Brooklyn Jewish father yearns for butter and meat.

Charlotte’s father, fussy Howard (irrepressible Dave Sikula), writes mysteries and likes to solve problems his own way. Howard loves to to bend others to his will—while claiming his Jewish, New York, liberal origins. Howard knows what’s good for everyone. He dotes on his Jewish princess daughter, trying to find out if she’s having sex with her Jonny who is Baptist and Black.

Howard is a ball of laughs as he orders them around. His old-fashioned Brooklyn biases seep out, along with his repressed sexuality.

In contrast, Howard’s wife, southern belle Lucinda (brilliant, bubbly Shay Oglesby-Smith), asserts her sexual openness and freedom. Oglesby-Smith creates a Lucinda whom anyone would be glad to have as a mom. She sparkles with wit and wisdom, putting Howard down and bringing secrets to light. Lucinda is a bright shining star who spreads her good vibrations over “The Mystery of Love and Sex.”

Howard and Lucinda’s marriage offers a poor example for Charlotte and Jonny. Jonny is also taking care of his mother who is a Baptist southerner and certainly doesn’t want to hear about his gay proclivities, or his white girlfriend who is not his girlfriend.

We can sit back and enjoy Dave Sikula’s brilliant portrayal of the self-centered, selfish dad who conceals hidden prejudices, even from himself. Lucinda tries in vain to make him more humane.

The climax of the story leaves us rolling on the ground. Jonny becomes a sober academic in California. He writes an explosive essay on Howard’s crime-fiction that sends us reeling with laughter. Jonny finally alienates the faux-liberal, Howard. And Lucinda deals with her meddling husband.

The uproarious final scene of Jonny’s naked attempt to rejoin his adopted family mingles tears with joy. The mystery of love and sex is revealed and sweetly reconciled.

Here’s a charming play that hits the notes of modern life: full male and female nudity, accepting and rejecting parents, and the rainbow of gay and experimental coupling. Who can resist such a mystery?

“The Mystery of Love and Sex” by Bathsheba Doran, directed by Rebecca Longworth, at New Conservatory Theatre Center, San Francisco, through Sunday, May 20, 2018. Info: nctcsf.org