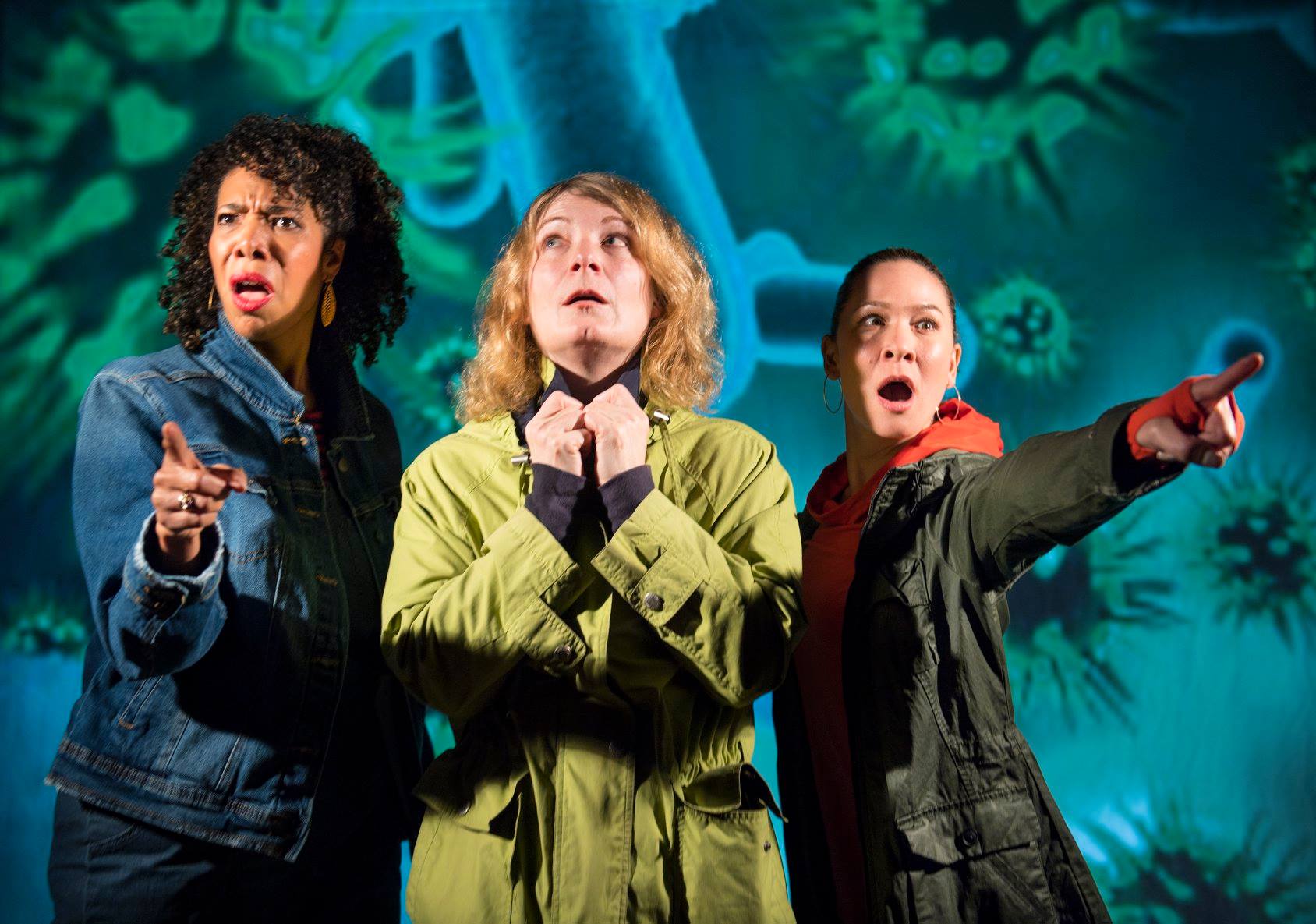 I had an “Oh No” feeling when I saw the private school parents’ board meeting assembled to resolve school issues. These meetings can be so boring! Not so, in the witty send up by Jonathan Spector of our current “progressive” communication style. Sitting in classroom kiddie chairs, the parents start to lose their meeting manners and act like children, cutting each other off verbally and acting out physically. The meeting falls into jargon-rich discourse, as the group “unpacks” issues and “frames” opinions, producing howls of audience laughter.

“Eureka Day” at Aurora Theatre shows us how these super-educated Berkeley Hills folk communicate–or think they do! Jonathan Spector displays their styles hilariously, through four board members and their bouncy facilitator. The parents must approve a small change to an identity checklist on the school admission form. It’s complicated because ‘identity’ has broadened to such a degree that the boundaries of race, religion, and gender have changed. As the four members have a go at stretching and contracting arguments for adding the term “adopted” as a possible option, their personalities emerge.

Eli (twitching Teddy Spencer) has retired from Facebook with mega-bucks. He is thrilled to be top dog at the politically correct, granola- and yoga-infused world of Eureka Day School. To insure he gets plenty of air time, Eli interrupts, runs over, and challenges the others–in ironic contrast to the all-inclusive mantra,  “I need to be heard,” that he espouses.

Suzanne (dynamic Lisa Anne Porter), a long-time board member and school founder, gets misty-eyed over school values of inclusion, acceptance and consensus. While she guards her right to disagree, she also excludes others by income, and overruns them by re-interpreting their opinions. A telling moment comes when another board member Meiko (graceful Charisse Loriaux) calls her out: “I find the best way not to put words in someone’s mouth is not to put words in their mouth.”

As the rationalist, Meiko quietly listens as she works out her own opinions. A single mother “by choice,” she is still balancing the conflict of putting her child first versus supporting the community.

New member Clarissa (wary Elizabeth Carter), mother of a special needs Black child, has a broader perspective than the privileged white parents. She mirrors back to the others their inconsistency, hypocrisy, and self-centered agenda.

Presiding at the head of this lion’s den, Don (energized, hilarious Rolf Saxon) strives for an elusive “consensus.” One minute, he’s challenging, then validating, and often soothing the group, trying to avoid conflicts. As the discussion pings back and forth like a pin ball machine, necessary scones are at hand to calm the process.

A medical crisis puts the values of the committee and school parents into stark relief via the clever device of projecting an open meeting using Facebook Live, with Don struggling to keep it calm. All hell breaks loose, when privileged parents drop their veneer of group-hug and the meeting turns into an online verbal tomato fight.

“Eureka Day” asks us to contemplate many trade-offs: between free speech and civility, sharing and owning, neutrality and commitment. Most important, Spector pits individual rights against the good of the community. Don’t miss this fast-moving comedy at Aurora Theatre’s Mainstage.