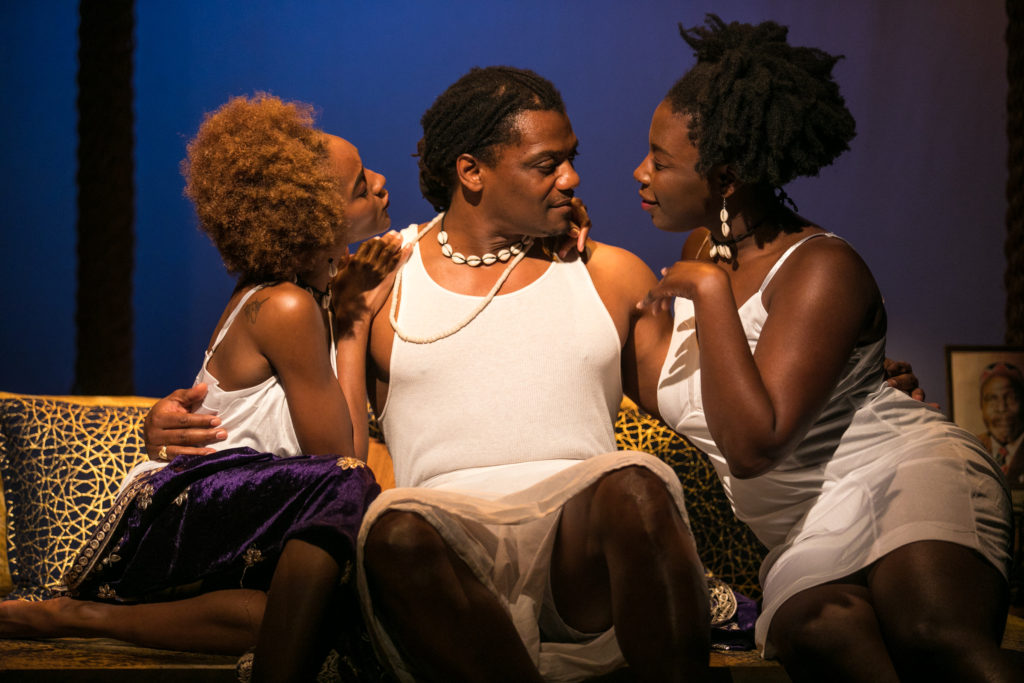 Bald, bright-eyed Awino (dazzling Troy Rocket) enjoys many privileges as the Chief’s first daughter.  But Awino hides a secret at their house on the edge of town. Although Luo people in Kenya expect their daughters to become wives and mothers, Awino envisions a more radical transformation. Awino denounces their clitoris in favor of a penis. Awino’s fledgling gender identity flickers dangerously at the edges of Luo tradition.

Centerstage, an omnipresent flaming rope altar burns an electric tension into the arid Kenyan air, marking the grave of Awino’s mother. Watching the flame dance on the rope, we feel anxious. At any moment, the precarious flame could consume the intricately woven rope. Likewise, Awino’s attempts at  gender-change can easily undo the foundation of the village.

Confident, liberal Bobby (boisterous Anastasia Barron) lives with Awino in their shabby kraal, or shack. They cover the only window with old T-shirts to keep their lovers’ embrace a secret, sleeping together on the floor. We wince as the young couple carefully tends to Awino’s flowering gender identity, like overzealous gardeners.

The Chief’s oldest wife, Mama Mugabe (unwavering Awele), scolds the chief for letting Awino run around with a lesbian American. Mama Mugabe warns the Chief that anarchy will erupt, if he allows Awino’s romance with Bobby to continue. Wicked, callous Mama Mugabe demands that Awino be circumcised at once to appease the ancestors.

“Mama Opio (sincere Jasmine Williams), closest to Awino in age, still remembers the pain of her own circumcision. She is quick to offer help to a potential victim. Mama Opio’s kindness is offset by Mama Otenio’s devil-may-care attitude. Mama Otenio (faithful Jeunée Simon) hides her trauma behind alcohol.

Our hearts break when the Chief showers Awino with affection and solemn words. He speaks wisely, like Mufasa to a young Simba. But as starvation growls in the belly of his people, his fatherly compassion shrinks.”

When the Chief condemns Awino to circumcision, we squirm in our seats trying not to look. The ritual surgery reminds us of the heavy handed patriarchy that continues to cripple women’s  bodies, daily.

From the defunding of planned parenthood to FGM, women’s bodies are controlled by others, all over the globe. Surely, it’s time to end the rule of patriarchs, once and for all.

Playwright Mwaluko has penned a radical critique of female gender mutilation and homophobia.  He depicts heartfelt conflicts that uproot tribal traditions and offers us visceral lessons on cultural revolution.